These services will be operated by First, Stagecoach and TM Travel on Boxing Day and by First on New Year’s Day. Normal fares, concessions and any relevant restrictions apply on both days.

The PTE (Travel South Yorkshire) goes on to explain:-

Please note that if a bus route is provided by a different operator to normal, weekly and monthly tickets only of the normal operator already purchased will be valid for travel. Otherwise for multi operator use a Citywide ticket is needed for travel, and also to use Supertram.

So, for example, on the usually joint (First plus Stagecoach) route between Woodhouse, Crookes and Hillsborough ...

... only First will be running. So if you are holding a season ticket for Stagecoach, tough bananas - you will have to pay again.


For the 120 (Halfway to Fulwood) the opposite is true. Only Stagecoach is running so ... 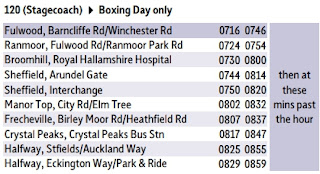 On New Year's Day, First is the only operator on the road and will be running some normally exclusive Stagecoach services, e.g to Stocksbridge.

Buses for Sheffield bringing you a co-ordinated service? Snort!

Obviously, from the above screenshots, regular blog readers will gather that it is all on line (Groan!) published by the PTE but not available in hard copy. 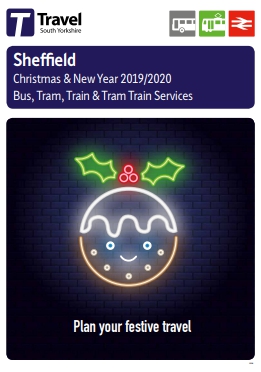 As this post was being penned by a weary fbb (*of which more in a note on tomorrow's blog) First Bus was offering no information for seasonal happenings in Sheffield ...

Stagecoach Bus is not yet ready to reveal all:-

But Stagecoach Supertram is effusive in its seasonal goodwill:-

Wishing our customers all the best for 2020!

Whether you are heading to the work Christmas party, shopping or visiting family, there is a ticket for everyone! A day of tram travel starts from just £4.20, and our Family tram only dayrider is just £9 (a day's tram travel for up to 2 adults and 3 children).

Over the festive period, some of our services will change. Please refer to the timetable below before you travel.

All trams will continue to have a helpful conductor on board to sell tickets and give travel advice.

Take advantage of FREE PARKING at Sheffield Park & Ride sites on Boxing Day and New Year’s Day! Just pay for the cost of travel on the tram.

For live updates and information over the festive period, make sure you are following us on Twitter.

The link above (in italics) takes you to full information for the festive season in what looks suspiciously like the PDF file for a printed leaflet. 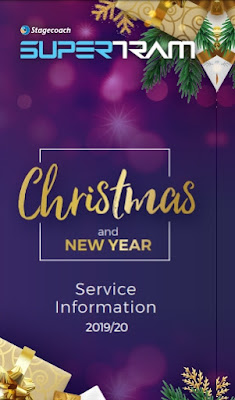 Printed publicity? Surely not? It's all on line!

From this PDF we learn that the Blue and Yellow trams will operate on boxing Day ... 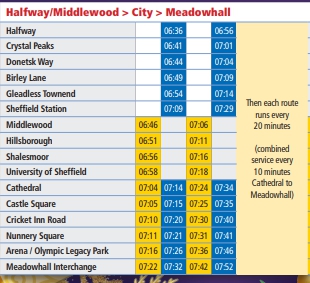 ... every 20 minutes on each. No purple trams (understandably depriving the two little-used stops at Herdings of their customary empty trams) and no Tram Train. Well you can't have the "Train" bit as there are  no such creatures operating in the north on Boxing Day. 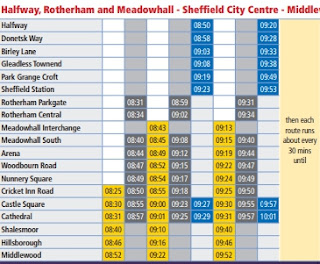 .. you have less Blue and Yellow trams but the privilege of two Tram Trains every hour (well you have proper trains on New Year's Day, see!)

The leaflet also give full details of the last trams on the two "early finish" days.

Unlike the bus operators, Supertram shows the curtailments as a proper timetable, not just and text list. 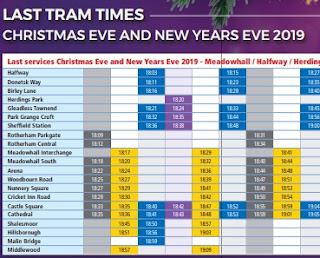 So Supertram gets the Mavis Thrucklebackit Award for good seasonal publicity.

Now here's a question! Are Stagecoach Supertram and Stagecoach Sheffield really part of the same company?

But, as ever, the devil is in the detail for these two days of "Special Services", detail which fbb will examine further in tomorrow's blog. 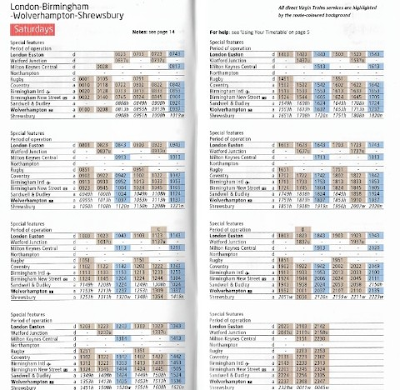 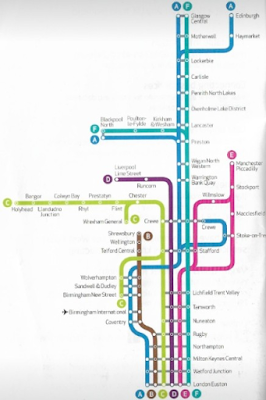 ... with no noticeable change. Avanti have even copied the Virgin inconsistencies!

Now, at the back of fbb's mind, there is something else, something important, happening on Thursday; now what is it?

The fbbs are off for a long weekend on the Isle of Wight!

The Nativity narrative is littered with Kings of all sorts and sizes.

"King Jesus"? The people were expecting a Messiah, prophesied throughout the Old Testament. In the minds of most, this Messiah would be either a political "saviour" or a military "saviour" or even, hopefully, both. What was needed was to kick out the Romans, to replace their puppet "kings" from the Herodian dynasty and re-establish something like David's Kingdom from 1000 years previously.

David was an unlikely choice for King, being only the kid who looked after the sheep. His brothers were bigger older and strong fighting men but, as the Bible tells us, "David's eyes sparkled".

Similarly, Jesus' Kingdom turned out to be very different.

After about three years of preaching and teaching, the hoped-for Messiah King would be sentenced to death by a Kangaroo court and nailed to a cross.