After five weeks of the Rangoon Nadgers and recovery therefrom, fbb is very much playing catch-up. The consequence has been less time to prepare and write blogs and a perceived (perceived by fbb) decline in quality.

It takes about two hours to assemble and write an "adequate" blog and finding time to compose on a daily basis can be a challenge. fbb does have other things to do, notably preparing for Christian meetings (three every month) and other presentations. fbb is not asking for sympathy - it is entirely his own fault - but heavy personal commitments over Christmas need to be considered.

From now until January 6th fbb will perforce have to offer mini-blogs to mitigate time pressures.

The old many (75 in February 2020) is very happy to receive information to stimulate blogs ...

... and will try to follow-up all suggestions.

Writing blogs is usually a pleasure but for the next couple of weeks other pleasures need to be considered.
-o-o-o-o-o-o-o-o-o-o-o-o-o-o-o-o-o-
Where Does This Bus Go?
Travel South Yorkshire's non-leaflet contains details of special (reduced!) services operating on Boxing Day and New Year's Day. As aside, the Stagecoach South group of companies is generally operating a NORMAL SUNDAY SERVICE on these two "special days".

And a further reminder that, on the Isle of Wight, hardly a hotbed of busy urban bus services, Sunday services will also operate on those two days with "special" services on all main routes on Christmas Day.

So back to Sheffield and the question, "How special are special services?" Normally, service 81 runs to Stannington ... 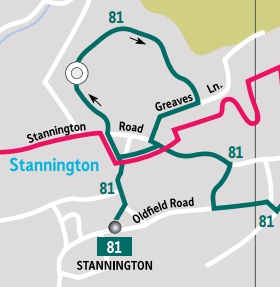 ... and on its return trip to the city centre operates via Acorn Drive, helpfully unnamed on the map above. Do the Special Services buses do that? There is no way of telling from the information available. 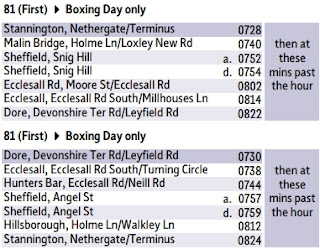 Likewise route 25 to Spa Road and Skelton Lane at Woodhouse. 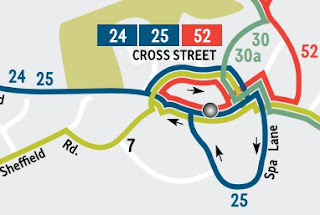 Again, you must assume.

Then there is the 20a. Outside of the festive season, service 20 runs from Hemsworth to Ecclesfield, specially via Yew Lane in the huge Parson Cross estate. 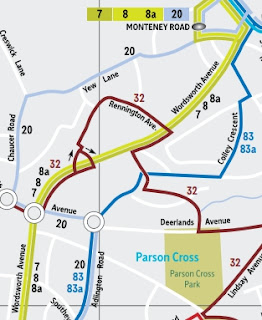 So what is different about the 20a? fbb could not discern anything from any on-line source and had to speak to one of his (exceedingly helpful) contacts at First Bus. 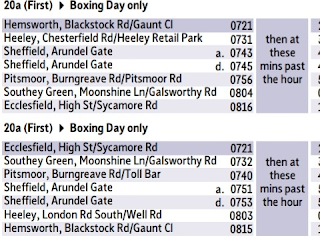 The answer is that the 20s follows the 83 route via Colley Crescent on Boxing Day and New Years Day.

There may well be a few annoyed and non-plussed Parson Cross residents as they wait at stops on Yew Lane.

Then there is the city terminus of buses on service 97 from Totley. As for last year's specials, the timetable on the TSY site is as below.

You might guess that the first three journeys from Totley arrive at Arundel Gate and trundle round the corner to set off back from High Street, not calling at Moorhead. That may or may not be true; but what happens to the rest of the journeys? Here is a map.

What actually happens is that the inbound 97s ALL call at South Lane (correct) then buses from the 1021 departure at Totley arrive at Moor Market at 51 past the hour, NOT Moorhead. After four minutes rest time they set off at 55 mins past as route X1 to Rotherham and Maltby ...

Ass you would be travelling to Fulwood on tghe 120. On Boxing Day you can't. Buses only run to Ranmoor leaving harrassed passengers with a long walk uphill or a long walk downhill from service 51 on Redmires Road. 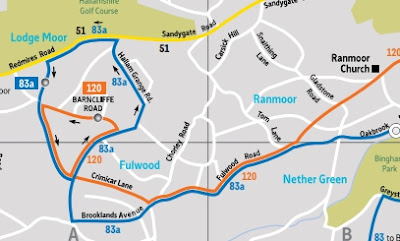 A significant cut back from previous years? But Ranmoor is the usual terminus for Stagecoach journeys on the joint service and only Stagecoach is running on Boxing Day.

But passengers FROM  Fulwood have a half hourly service! 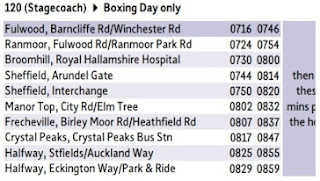 Of course it is a mistake; but likely to confuse and discourage passengers from even setting out. Never mind, they probably won't even look at the special timetable as it seems likely that neither TSY or the operating companies will produce any printed information.

So less passengers for next year? 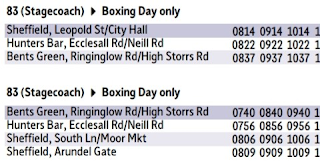 It purports to leave from Leopold Street near the Town Hall; from here in fact. 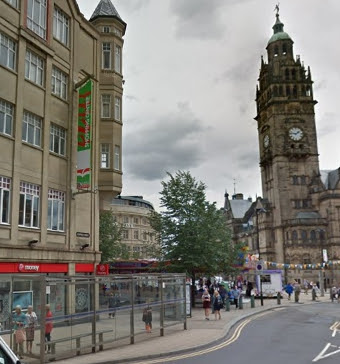 fbb is as certain as he is of anything that it doesn't. Nothing terminates there and even Stagecoach (the operator) would not bamboozle its customers by starting the service at a stop well distant from its usual base. The 83 probably calls there as it does on "normal" days, so folk who can find and read the timetable might find their bus home.

But the poor souls who stand expectantly on Snig Hill ... 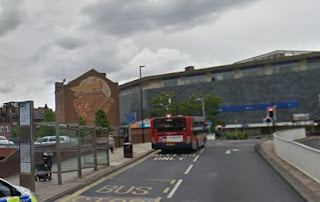 It's a mystery which may be a simple timetable error. fbb will wait with eager anticipation for the correction!

Tomorrow we go to the Isle of Wight blog-wise. Today the fbb's are travelling thither leaving neighbour and their big fierce dog to guard the premises and receive lavish parcels.

Two of the Gospel writers have no Christmas story. One, Mark, starts with John the Baptist as the announcer or forerunner "preparing the way of the Lord".

John's Gospel does start with Jesus but not with a cattle shed, shepherds or wise men.

He starts with Light!

The Word was the source of life, and this life brought light to people. The light shines in the darkness, and the darkness has never put it out.

Many people of the day through that John the Baptist ... 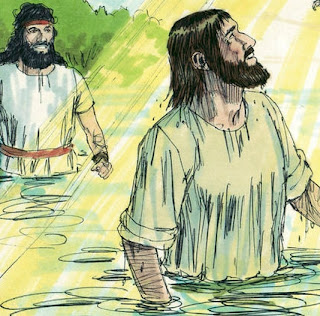 ... might be the Messiah, the Saviour. But John not-the-Baptist was quite sure that Jesus (he calls him "The Word") was the real McCoy.

For the ancients, Light was seen as utterly necessary for mankind's existence. It still is!

So John not-the-Baptist is anxious that his readers should understand that, in a deeper and more "spiritual" way, we all still need the Light of Jesus is a dark and troubled world.

We sing about it lustily ...