A colleague and I had the pleasure of sampling the new Grand Central train service from Kings Cross to Bradford.   It was only the fourth day of operating the service and we expected a few teething troubles.   There were none! 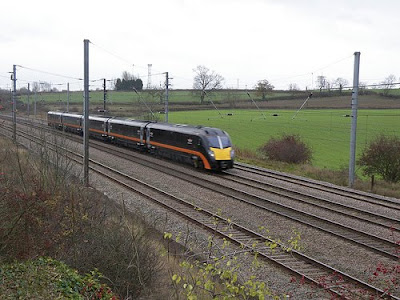 The Adelante train was exceptionally comfortable, in both first and second class; indeed far more confortable than Virgin's Voyager or Pendolino trains.    The buffet was well stocked with a superb range of sandwiches made in Bradford and our hot rolls we well stuffed with very tasty bacon.   We left "The Cross" at 1050 and arrived on time at Bradford Interchange.   Our return journey was ten minutes early back in London after a superb uninterrupted non-stop run from Doncaster.
We travelled first class (as a treat - the trains were, understandably, lightly loaded.  There were plenty of seats!) and were plied four times on each journey with a choice of complimentary hot or cold drinks.  We were also offered the Independent and the Daily Telegraph, but not 't Yorkshire Post!  The staff were polite but not superciliously deferential, and it was really good to hear Bradford accents looking after West Riding travellers.  "It were grand"!
Bradford itself, I guess, would not come top in any Tourist Guide, but we found a superb Fish and Chip cafe - two lunches for £7.80 - served quickly and efficiently.   "just sit thesen down, love, I'll fetch y' y' dinner".   Almost worth going for the ethnic delight of the meal!   Maybe we would have enjoyed the City more had we been able to stay for more than 90 minutes!
In the same way that Jeremy Clarkson might complain about the design of a gear lever, I do have one complaint; perhaps more of a disappointment....
Cardboard cups and plastic teaspoons in FIRST CLASS!  Shame on you, Grand Central!
Posted by fatbusbloke at 11:17 No comments: 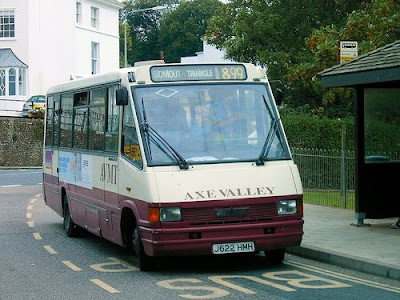 
We can't manage anything quite like Mergoscia (read again) but there are some very special bus rides in Britain.   A favourite starts in Sidmouth (Devon) and is run by Axe Valley Mini Travel [service 899], a small independent company based along the south Devon coast at Seaton.   The ride starts innocuously enough along the main road from Sidmouth Triangle to Sidford; then, at the Donkey Sanctuary the route turns along typically narrow Devon Lanes to Branscombe. 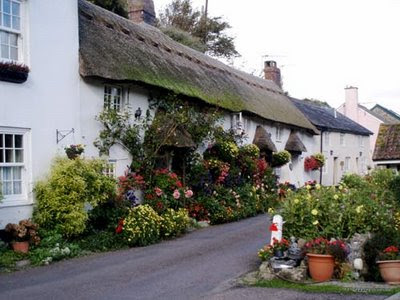 Branscombe is a  very picturesque little village with a delightful secluded bay about 10 mins walk from the bus stop. 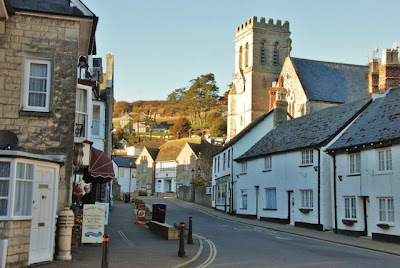 Beer (home to Pecorama Pleasure Gardens and Beer Quarry Caves) is a former fishing village, best described as "quaint". The whole ride is "hairy" as the roads are barely wide enough for the bus, let alone any passing vehicle.   There is plenty of tricky manoeuvering and reversing - all accomplished with consummate skill by the ever patient drivers.  And the Devon countryside, with deep valleys, rich colours of vegetation and magnificent coastal views is magnificent at any time of the year.
Ride it yourself - and enjoy!
Posted by fatbusbloke at 21:13 1 comment: 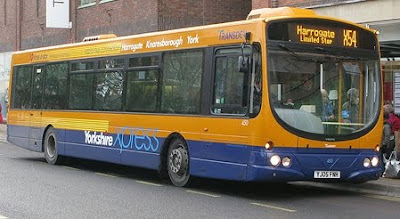 It was, apparently successful. A new express service from Harrogate to York (a route which had never been successful in the past) was started; boosted by the OAP free travel scheme which, of course, is not valid on the parallel train service. Rumours suggest that it was NEARLY successful; but the service was then cut back with the gaps filled by Harrogate Coach Travel. 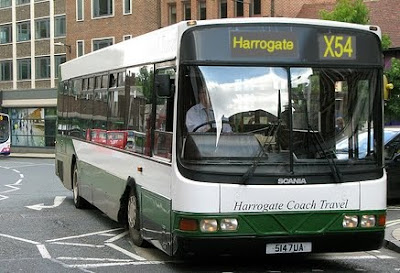 Then in December 2009, Nigel Egginton (Transdev Harrogate and District) announced that, because of poor OAP funding formulae, the service could never be viable. (What, never? - No, never!  What never? - well, hardly ever? - thanks Captain Corcoran of H M S Pinafore) The H&D X54 was withdrawn.
But Harrogate Coach Travel journeys continued, "subject to a review in early 2010".

So, will I be able to use the X54 in June? According to Transport Defunct it will still be running; according to Traveline's journey planner likewise. Ominously "there is a problem" with displaying a timetable on Traveline. According to a number of other websites, however, it is till there.
But it does not appear on Harrogate Coach Travel's website, nor is it available on xephos. An email to the operator has, so far, elicited no response.

So, YET AGAIN, in the wondrous world of superb public transport information, I SIMPLY CAN'T FIND OUT! Hey ho! Better take the car ..
Posted by fatbusbloke at 09:11 No comments:

And a very Unhappy Birthday!

10 years in November since the very last edition. 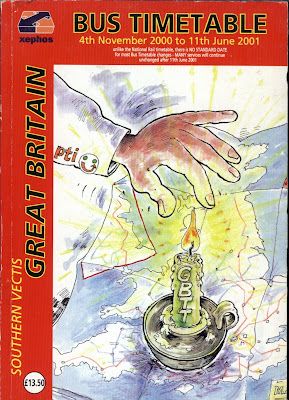 What a very good idea.   The Great Britain Bus Timetable was published by Isle of Wight bus company, Southern Vectis.   It contained nearly 3000 timetables in summary form and was available in all Tourist Information Centres, all main Libraries and staffed railway station enquiry offices.   It had its limitations, of course, especially as timetables changed so frequently - but at least it was a start.   Each timetable had the operator's phone number, and, in the heady pre-technological days way back in the 1990s, someone would answer who actually knew where the buses ran.

But cartoonist Rupert Besley's farewell cover says it all.  PTI (Passenger Transport Information) which begat Traveline; which begat Transport Defunct; snuffed out the much admired and much used only national source of bus information.   The bus companies withdrew their modest funding (£250,000 in total) in favour of the more expensive Traveline - now enhanced (?) by the £50 million budget for Transport Defunct - and GBBTT was no more.

With the exception of Traveline south east, full timetables are simply not available on the more expensive replacements for GBBTT.  Try for yourself:  find me the timetable for Service 3 to Splott!   (Radio presenter John Humphries was born there!) And when you have found it, print out a copy to take with you when you go.   You could even try getting one from the company that runs the service, or from the Local Authority that pays for it and -- as they say, Best of British!

Obtaining even on-line timetables is now very difficult oustide the larger PTE areas (e.g. Manchester, Sheffield) and, helpfully, totally impossible in London. - and obtaining paper copies can be well-nigh unachievable.  Tourist Information Offices are more about selling accommodation and and souvenirs and show little interest in providing a proper service of, well, information for tourists.   Libraries are usually useless and bus enquiry offices are as rare as the manatee.

For little money - say £750,000: small change for the industry - a full set of timetables could be available on-line, downloadable at home, at railway stations and in libraries.

So, bus industry, give us back our Great Britain Bus Timetable, on-line will do!   Then we can make sensible travel plans, not burdened with restricted information, often misleading and sometimes plain wrong, as we grapple with over complex journey planners.

UPDATE : I note that Traveline Scotland now provides timetables (in PDF format).   Whereas the best Traveline North East can do is link to a few operators' websites.

Brand awareness came quite late to the bus industry.   Apart from a few early successes - one being the "City Clipper" (* see below) city centre service in Sheffield (long since withdrawn) - it was probably Trent that began the modern trend.   There was the "Red" and the "Blue", then routes like the "Spondon Flyer" and, joint with the appropriate named Felix Motors, the "Black Cat".  Some are simply meaningless, like "Pronto" from Nottingham to Mansfield and beyond.   The mantra was then taken up by Go-Ahead in the Gateshead and Washington areas.  But Trent remains a pioneer of the total abandonment of route numbers in favour of brands.
Stagecoach took up the challenge of "silly names" with things like "The Bridge" between Havant and Hayling Island, the recently abandoned "Pulse" brand in Salisbury and a whole range of wonderful titles in the former East Kent area.
Harrogate and District began emphasising route numbers as a brand with "The 36" between Leeds and Ripon and fellow Blazefield company created the "Spot On" network in Blackburn.   First Bus introduced its "Overground" branding and "line" colours - "Lime Line", "Teal Line" and we await the arrival of "Heliotrope Line" and "Muddy Grey with a touch of Pink Line".
But my vote for the weirdest (or is that the most imaginative?) name must go to Peter Shipp's East Yorkshire.   On April 24th 2010 the company started the X55 from Gilberdyke via Brough to Hull.   It is branded the Petuaria Express!   Petuaria? ... 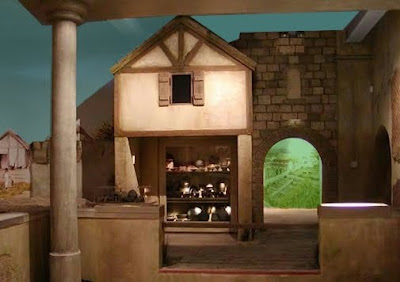 This picture (from the Hull and East Riding Museum) reconstructs part of the Roman Fort of Petuaria Parisorum standing where Brough does today.   The fort was abandoned by 120AD but Brough's attractive Community Centre still uses the Petuaria name.
You have to wonder, however, how many extra customers will use the service - attracted by its somewhat eclectic brand name? 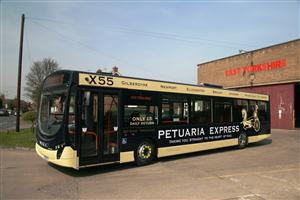 *P.S. One Christmas, an enterprising enterpreneur ran a horse-drawn carriage tour of Sheffield city illuminations.  And they named it ...
... "The City Clopper".
Posted by fatbusbloke at 16:07 1 comment: