In Search Of Manhood?

Please Note: the second part of the
Bristol blog
is postponed until tomorrow.
The reasons for the change will become obvious!


Competition in the public transport industry is nothing new. Local steam hauled railways in large cities were threatened by the cleaner and more "local" electric trams whilst rural branch lines often succumbed quite early to the more flexible and cheaper motor bus.

Such was the case with the railway between Chichester and Selsey. 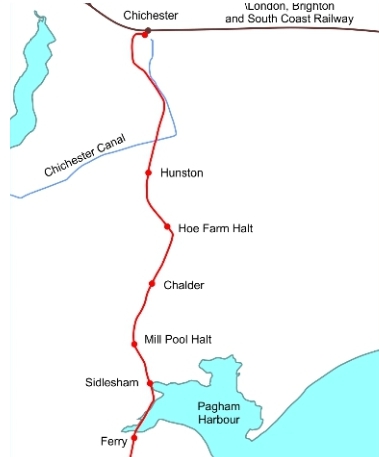 The line, which opened in 1897, was also known as Hundred of Manhood and Selsey Tramway. 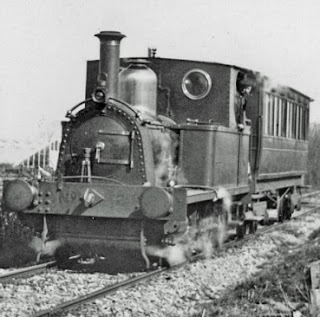 It was opened as a rail "tramway" in order to avoid having to comply with regulations that managed conventional railways in the United Kingdom. 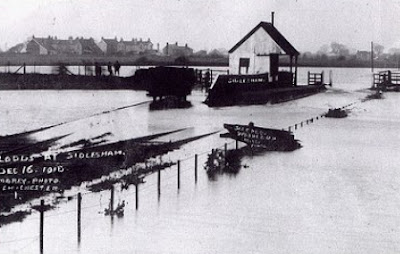 In December 1910 the line was flooded when an embankment failed at Pagham Harbour. It was not reinstated so work had to be carried out to raise the line above the waters. 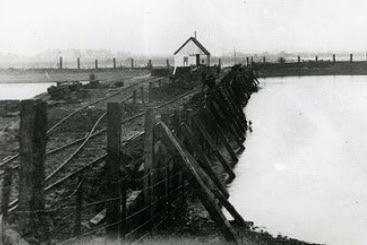 Some accounts say that the line never really recovered from the cost of this engineering work.

Although the line was successful before the First World War, it suffered financially as road transport increased in the 1920s. Despite attempts to be more efficient through modernisations, such as the introduction of petrol driven rail car services ... 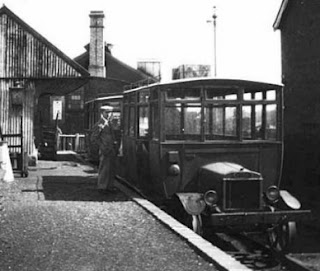 One significant piece infrastructure was a lifting bridge (of a very basic design) over the Chichester Canal. 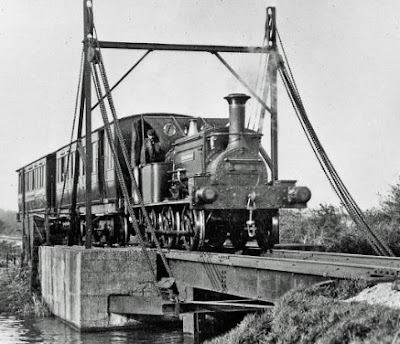 Station facilities were not lavish as here at Selsey. 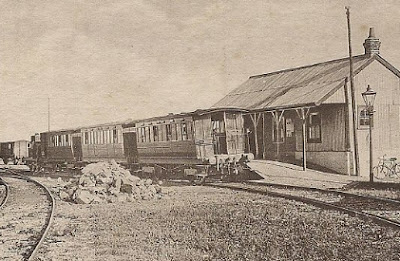 Sadly there is almost no evidence of the existence of the line today; a couple of bridge abutments and a dotted line on a modern map ... 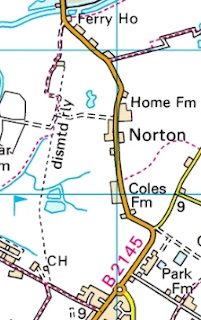 ... replicated to the right of this aerial view. 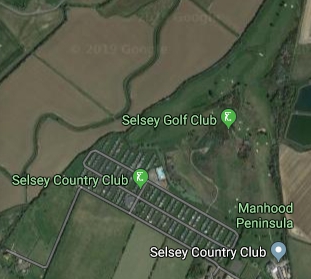 And there we have it again; the title "Manhood Peninsula".

So what was the "Hundred of Manhood". A "Hundred" was an ancient "local authority" with its own court and many of its own laws. The Hundred of Manhood was part of the Rape (yes, Rape!) of Chichester.

The Manhood Peninsula was formerly known as the Hundred of Manhood, in the Rape of Chichester.The Rape was a county sub-division peculiar to Sussex. In AD681 St Wilfrid arrived in the land of the South Saxons and spent five years there evangelising them. The South Saxons had been conquered by Wessex and it was their king, Cædwalla, who confirmed a grant to Wilfrid of 87 hides of land in AD683, to build a monastery.

The Chapel of St Wilfrid still stands in the village of Church Norton, near Selsey.

For the record, Stagecoach provides the current bus service between Chichester and Selsey.

Every 15 minutes Monday to Friday, every 30 minutes on Sunday. Probably a bit more frequent than the former "tramway"

It is good to celebrate at Christmas but, because the leaders of Christianity chose to arbitrarily mark the birth of Christ at an existing pagan celebration time, there has always been a conflict of interests. Much of our Christmas Tradition is utterly pagan and has no link whatsoever with the Christ Child.

Holly
Ivy
Christmas Tree
Mistletoe
Mince Pies
Carols (a dance)
The Wassail
and many many more.

Rudyard Kipling wrote an evocative poem ("Eddi's Service") about this conquest, centred on st Wilftrid's Chapel at Manhood End, an old name for Church Norton. In the poem, Eddi (Eddius Stephanus, a real cleric) as priest of St Wilfrid's Chapel in Saxon times leads a service whilst "The Saxons are celebrating Christmas" - not  Christmas  - but their own pagan festivities.

History tells is that St Wilfrid (in about year 687) had great difficulty in evangelising the Saxons of Manhood, so it is no surprise that no person turned up for the Christmas Eve service, according to the poem.

The altar-lamps were lighted, –
An old marsh-donkey came,
Bold as a guest invited,
And stared at the guttering flame.

The storm beat on at the windows,
The water splashed on the floor,
And a wet, yoke-weary bullock
Pushed in through the open door.

And he told the Ox of a Manger
And a Stall in Bethlehem,
And he spoke to the Ass of a Rider,
That rode to Jerusalem.

Till the gale blew off on the marshes
And the windows showed the day,
And the Ox and the Ass together
Wheeled and clattered away.

And when the Saxons mocked him,
Said Eddi of Manhood End,
'I dare not shut His chapel
On such as care to attend.'

Of course the poem (and history!) beg the question, "What exactly do folk celebrate at Christmas?"