For The Last Time (Probably) Part 5

With the withdrawal of trains between Shanklin, Wroxall and Ventnor ... 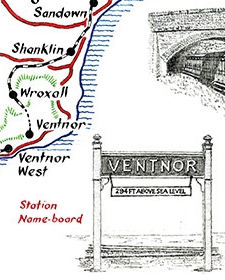 ... a replacement bus service was provided by Southern Vectis (now part of the GoAhead group). Incidentally, this map has confirmation that Ventnor Town station also boasted of its height above sea level - fbb seemed to remember thus but could not find any corroboration.

Service 39 ran every 15 minutes during the peak summer from a long shelter just opposite Shanklin's station exit. Various vehicles were used over the years ... 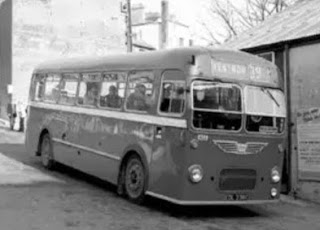 ... but the newly arrived REs were the most memorable. 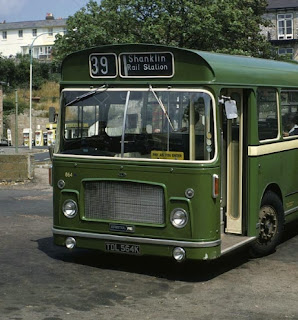 S usage declines over the years, the "service" was incorporated into the "normal" Ryde to Ventnor bus route, first as route 16B, then 36, the as part of the "round-the-Island" group of routes numbers 7, 7A and 7B. 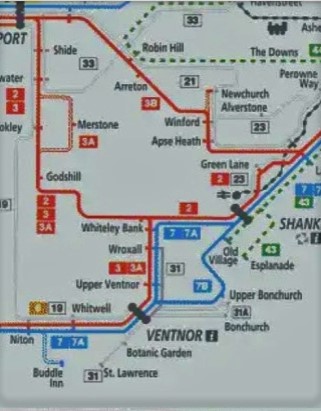 Increasingly there was growing dissatisfaction that these services did not provide proper connections with the trains and, more importantly, did not run into the station yard.

So it was that the council subsidised a "Rail Link" service, operated by its own Wight Bus company, which was timetabled to meet specific trains and returned to calling at the station itself. 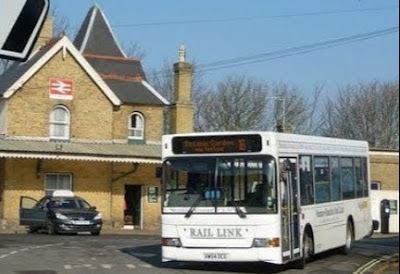 It also appeared on Island Line timetables. Perversely it followed the same main road route as Southern Vectis' more frequent service and, for most of its life, did not serve Wroxall. It did, however, extend to St Lawrence but, generally, carried few passengers.

The above is a very simplified summary (purists please don't complain) but does indicate that the rail link from Station to Wroxall and Ventnor declined steadily as did the Island Line itself.

But train passengers can still catch a bus from the station to Ventnor and Wroxall today. Yippee! 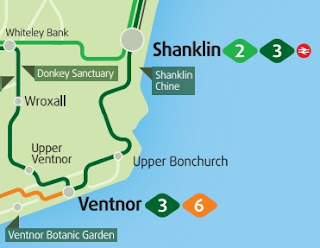 Passengers for Wroxall now have a "long way round" journey but, buy way of compensation (?) they have a bus every 30 minutes seven days a week. Yippee! 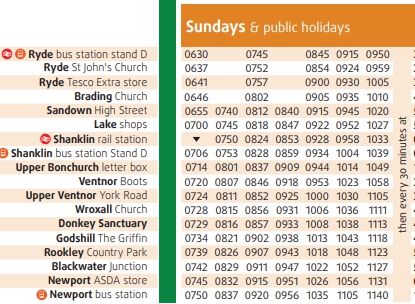 Departures from the station are at 03 and 33 and the trains (when two are running!) arrive at 13 and 30. The mainland connecting train is the one that arrives at xx13, so through passengers will have a 20 minutes wait for the xx33. Arrivees at xx30 should be fine but don't dawdle. The railway timetable assumes you will miss it! 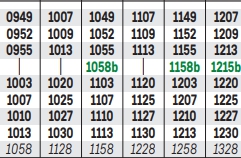 The "integrated" journey is not very integrated and, not surprisingly, the crows do not flock from train to bus.

All this, of course, assumes that you know what is going on.

There are no signs to the bus stop or any indication on the station that the services exists. The station plan advertises the old Rail Link service ... 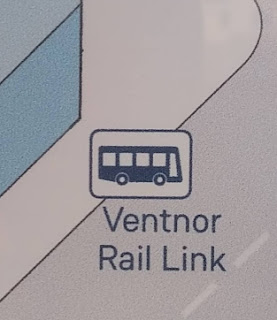 ... but there is a bus stop flag observable from the exit door. 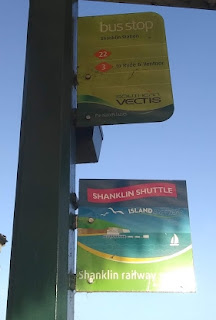 The bottom flag is for a summer only service but it doesn't tell you that. The departure lists in the frame are well bunched together ... 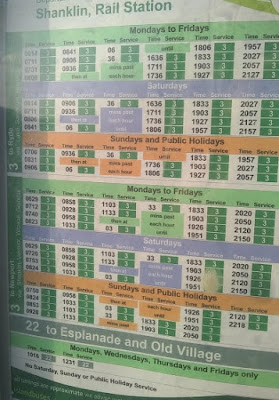 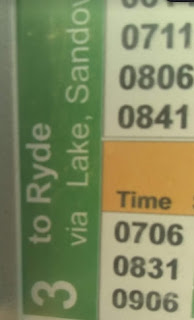 ... and journeys to Newport via Shanklin and Ventnor.

But I am IN Shanklin, the untrained traveller may wail. And the flag says ... 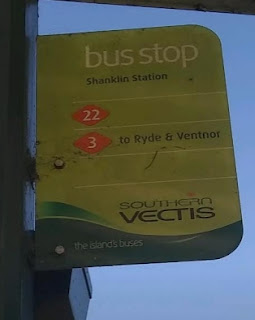 ... to Ryde and Ventnor. Now, nothing is actually WRONG with this information, but it is not conducive to clarity and confidence for a non-regular user.

If they (the mysterious and ill-defined "they") really want people to transfer from train to bus then connections need to be slick and information needs to be clear and consistent.

How about "next bus to Ventnor" on the departure screens?

Through tickets? Snorts of derision!

Still, whilst waiting, you could visit the little shop in the booking hall ... 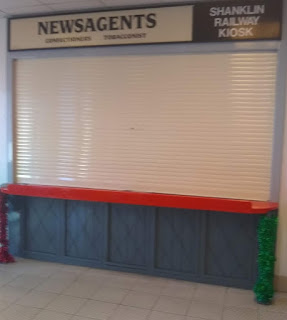 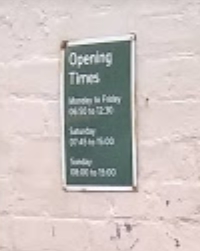 ... but you can "go" up to 1500 on Saturday and Sunday because toilet accesibility is only available when the ticket office is open.

Now that's a point. Will there be toilets on the new Vivarail trains?

Either way, times of toilet opening were irrelevant when fbb passed through. 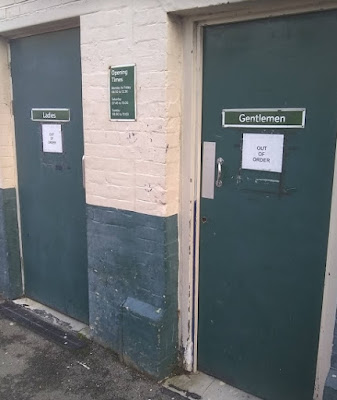 Cross-legged, fbb was collected by Mrs fbb and conveyed back to the hotel by motor car. Phew.

You might hope that part of the £26 million budget for the lines' expected upgrade might include attention to the little things and a better way of encouraging integration and interchange at Shanklin.

If you were expecting S for Sin (an unfortunate turn of phrase!) you will be disappointed because it is:-

Simeon (and Anna, a character who shares the narrative) is one of the unsung and largely ignored heroes of the Nativity story, yet he appears, chronologically, well before the Wise Men turn up; a little less than two years before, in fact.

The time came for Joseph and Mary to perform the ceremony of purification, as the Law of Moses commanded. So they took the child to the Temple in Jerusalem to present him to the Lord.

It was the Jewish equivalent of a Christening. And there, in the temple, something weird happened. 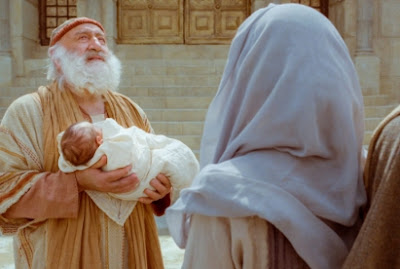 Simeon took the child in his arms ...

He would have probably been arrested today!

... and gave thanks to God: "Now, Lord, you have kept your promise, and you may let your servant go in peace. With my own eyes I have seen your salvation, which you have prepared in the presence of all peoples: A light to reveal your will to the Gentiles and bring glory to your people Israel."

Somehow, Simeon had got the message. This baby would be a revelation and bring glory through his gift of Salvation - and it would not just be for the Jews; the offer was for non-Jews as well.

Anna, an aged prophetess who actually lived in the Temple, joined in. 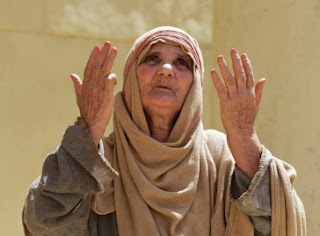 That very same hour she arrived and gave thanks to God and spoke about the child to all who were waiting for God to set Jerusalem free.

Mary and Joseph were "astounded" as well they might be.

Yet again we can get the message if we choose to notice; the  CHRISTmas  baby grew up and was expected to do something very special for all the people.

Simeon is "commemorated" in some church circles by a short Psalm called the "Nunc Dimittis", its title taken from the first words of the "song" as written in Latin.