Not public transport related, but amusing (and sad) all the same. The local paper reported a bludner on the labels of their new parking meters. 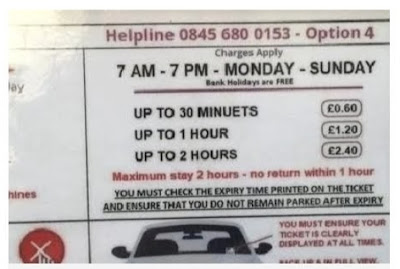 As the sub editor chortled at the council's (or the manufacturer's) poor spelling and/or proof reading, he failed to notice his own error.

The replacement of "measuring device (meters)" with "length (metres)" was then repeated in the accompanying article. 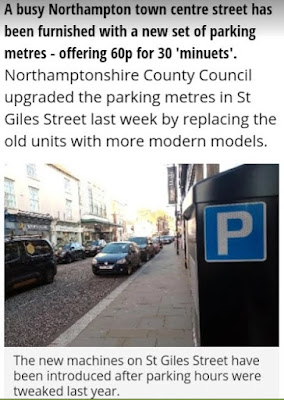 Quick as a snail, the red faced council officials applied sticky labels to correct the error whilst waiting for some new bits to glue on permanently.

What Are Windows For?
When fbb's father went on Scout Camp from Northampton to Pevensey Bay, the whole party plus tents and kit bags  travelled in Hamps largest pantechnicon. No pictures could be found of a Hamps vehicle, but it probably looked like this:- 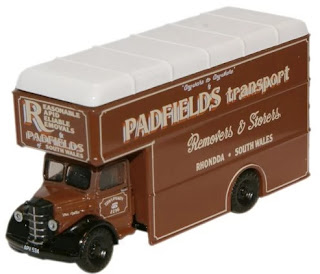 The views out of the lorry were not very good.

With this in mind, fbb was perplexed to find an article extolling the virtues of Volvo's new electric gantry-chargeable buses recently delivered to Birmingham Airport. 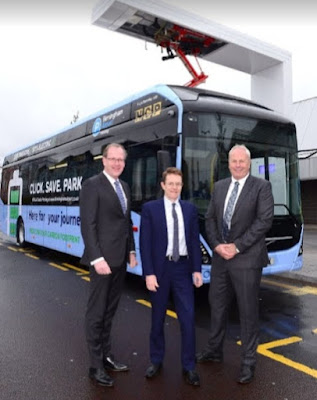 The bus has very large windows offering an excellent view to every passenger. So what does the airport do?

Plaster the windows with large lettering and a huge graphic of a mobile phone. 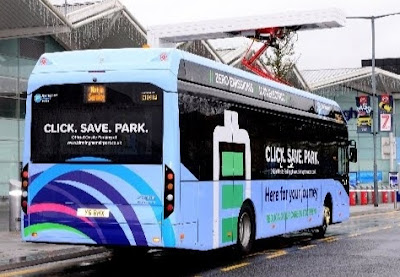 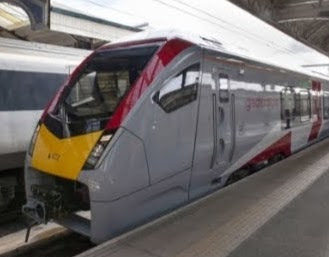 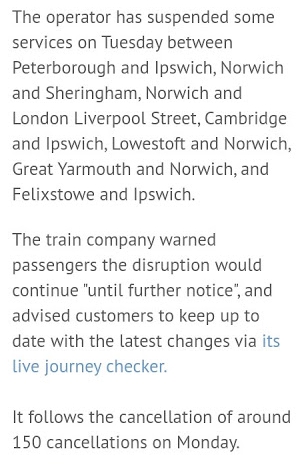 In August 2016, Abellio Greater Anglia (Dutch State Railways) was awarded the East Anglia franchise with a commitment to replace all of the existing fleet with modern trains. As part of this an order was placed with Stadler Rail for 38 bi-mode multiple unit Stadler Flirts.

The first unit arrived in the UK in November 2018; entry into service was initially planned to begin in mid-May 2019, but during May it was delayed to the end of June or early July. All were scheduled to enter service in 2019.

Faults with the vehicles discovered during their introduction led to staff at Crown Point awarding them the nickname "Basils", after Basil Fawlty.

As of yesterday afternoon at 1645, the Greater Anglia web site was saying:-

Between Ipswich and Lowestoft, we will be operating an altered service, whereby trains will be departing every two hours.

Greater Anglia tickets will be accepted on First buses between Lowestoft and Beccles.
x2,x21 & x22 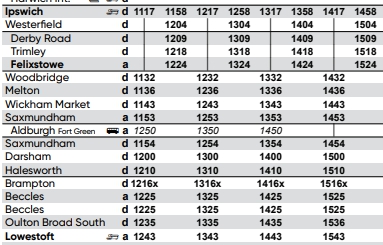 Train services between Ipswich and Peterborough via Ely will be suspended until further notice.

Norwich to Sheringham services will run at a reduced speed causing severe delays. As a result, train services from Norwich will terminate and start from Cromer.

After 09:45 these services will run every 2 hours.

A Rail Replacement Bus services will operate between Cromer and Sheringham Greater Anglia tickets will be accepted on Sanders buses 44,44a, x44 x40

Whilst these trains, we are told, have been "thoroughly tested" before delivery, fbb understands that the vehicles' electrical systems are interfering with the signalling.

It never used to happen when a man in the signal box pulled a lever which pulled a wire which worked the signal! 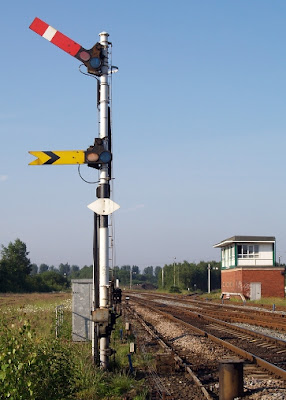 An Uplifting Story?
Quite how it happened, fbb cannot remember; but his teenage years model railway possessed a Hornby Dublo breakdown crane set. It ran but rarely as it was totally inappropriate for the single track branch line that was the "sitz im leben" of the lad's model.

The model can still be obtained "pre-owned" usually selling for about £30. 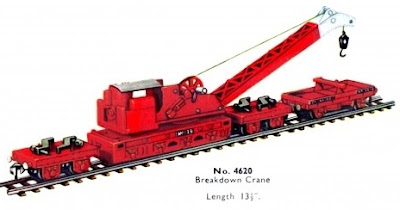 Like all Hornby models of the day, underframe detail was  very poor but the crane had overscale handles which allowed the owner to raise the jib and lower the hook. It also had outriggers to stop the thing from falling over when the jib was swivelled at right angles to the chassis - seen above loaded on the two smaller match trucks.

A later model in the Triang Hornby years was better by far ... 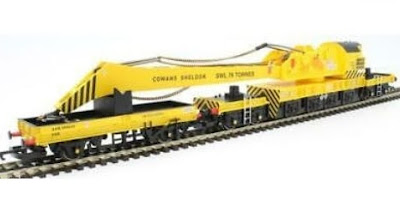 The latest (January 2020) of Railway Modeller magazine has a review of the very latest breakdown crane model from Bachmann. 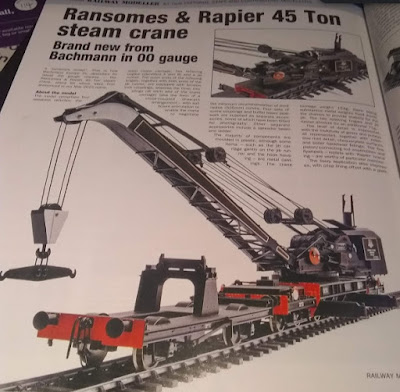 The detail is fantastic; all the gear wheels twiddle, the cables are made of a slightly knobbly twine to look like very fine chain AND it has much more realistic outriggers shown partially extended in the picture above.

As on the "oldie" models the bits can be twiddled by inserting a thingey into holes in the body of the crane, but only after removing a blanking thingey using a magnet on the end of the twiddling thingey 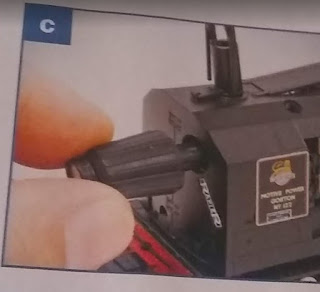 A photo of a real crane shows how Bachmann have cleverly used "holes" in the back of the structure to provide access to the winders. 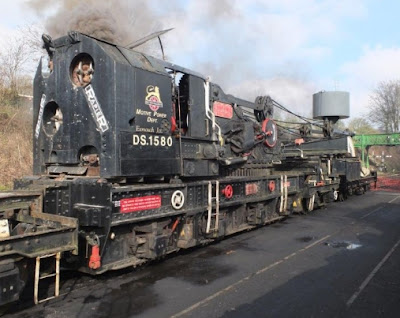 There is just one small snag with the product; it retails at £250. Multiple OUCH!

Some retailers are offering the model on-line at £212. Slightly less OUCH.

By the way, it does not have a motor or anything clever in the electronics field - it's just a plastic and metal model. It is also a model which fbb would love to own, but could never afford and would almost certainly break within hours of taking it out of the box. It is also far too long for a place on the old man's layout. 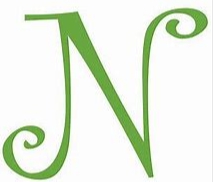 ... is translated into this in Greek:-

Transliterated into English is Evangelion which gives us "evangelist" and "evangelical".

It also become Evangelium in Latin.

Traditionally, in English, we use a derivation from Anglo Saxon ...

gospel
... what was originally two words:-

god and spel
"god" is simply good (as, incidentally, is the origin of the name "God"!) and "spel" which we usually translate as "news". The "news" bit is in the sense of "telling out", "spreading" or "broadcasting". When you "spell" a troublesome word, you are "telling out" the letters that make up the word.

You cannot avoid that angelic appearance, unless you choose to ignore it! 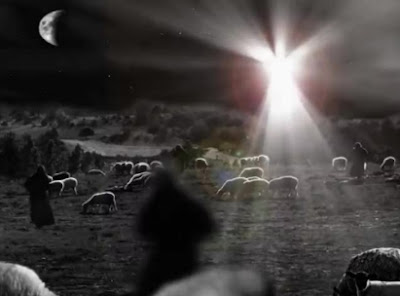 Do not be afraid! I am here with GOOD NEWS for you which will bring great joy to all the people.

The real  CHRISTmas , whether ignored apathetically, sidelined by consumerism and so-called "celebration" or accepted more or less enthusiastically is still on offer in 2019.