... From The UK's Rail Companies

The new and "improved" rail timetables got off to a poor start earlier this month. The following is just a selection of the pre-Christmas goodies on offer to the life-weary rail passenger. 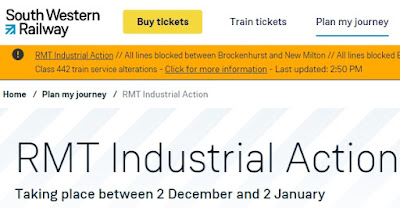 We expect to run more than half of our normal Monday to Friday services, prioritising capacity during peak periods, with the same level of peak services as in previous strikes

Services will finish earlier than normal

Off-peak frequencies may be reduced

Buses will replace trains on some routes, with ticket acceptance with other operators on others

Great Western Railway (First)
Was messed up by a signalling fault on the day it launched its new fast service to Bristol Parkway and Temple Meads. Not the operating company's fault, but the passenger does not care whose fault it is; they want their trains to turn up and run!

No 1 son, who commutes from Didcot to Padddington reports that, after a dodgy first day, things seem to be running well and the service is excellent. He uses a train from London at 1728 which runs non stop to Didcot in a little over 30 minutes.

And, says "the boy", because it doesn't stop at Reading you can always get a seat. 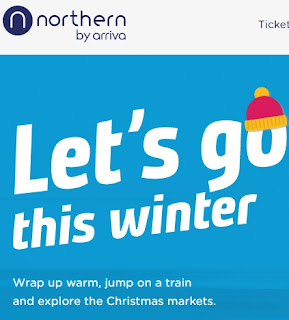 The first day of their new timetable was marred by a crop of cancellations. This departure display snapped by a Leeds commuter ... 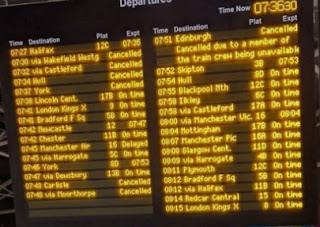 ... show SEVEN trains cancelled and one "delayed". But do not be deceived by the "on time" label. The National Rail system always shows ALL trains as on time until a report comes in that they are late. So many of those "on time" trains may not yet have triggered their correct location and timeliness.

A P.S. via Twitter from correspondent Roger whilst visiting the new Warrington West station, opened with the new timetable. 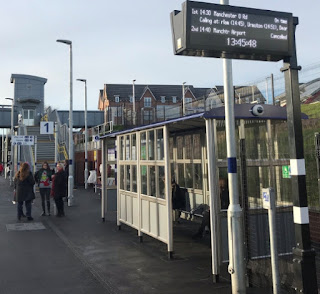 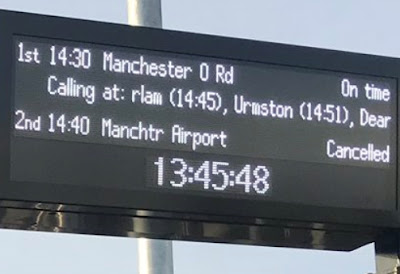 The poor performance in the north is shared with ...

Transpennine (First)
Here the company has proudly announced it new trains adding "thousands of seats" and "new routes" to the network (e.g. extension of trains from Newcastle to Edinburgh) ... 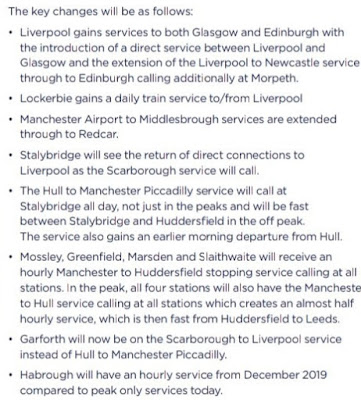 ... and so on. Only some of it didn't happen with cancellations announced in advance.

But that wasn't all. Here is Trans Pennine's boss as quoted in northern newspaper reports.

“Due to a number of issues with crew training caused by the late delivery of some of our new trains, along with a maintenance backlog and some infrastructure issues we have had to implement a temporary timetable, cancelling some journeys along one of our routes. This has unfortunately made a number of other services a lot busier. We are working really hard to sort this for our customers and as we introduce more new trains we should see an improvement to people’s journeys.”

Once again, the customer does not care whose fault it is - they want their train to run, and preferably to run on time.

Things will get better, of course, but the whole shebang has not performed as it should.

Somewhere along the line there is BAD MANAGEMENT!

Why is this sort of thing always happening?

Answers on a postcard, please to Grant Shapps (if he is still transport minister when this blog is published!) c/o No 10 Downing Street.

Greater Anglia (Abellio)
fbb has already commented on the problem with its new whizzo "Flirt" trains and the consequent cancellations and curtailments.

But this was the headline a few days ago. 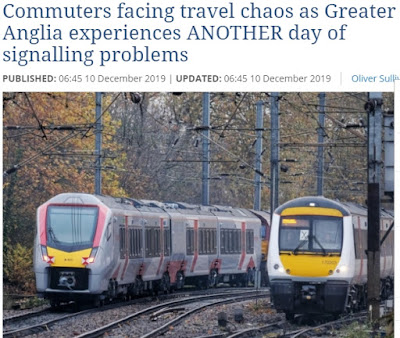 Maybe we should ALL stay at home until after the start of the New Year.

Then, you will be thrilled to hear, we get a rousing "Happy New Year" from the bus industry.

The fbbs are off on their travels again tomorrow - to a Christmas with the family at Abergynolwyn ... 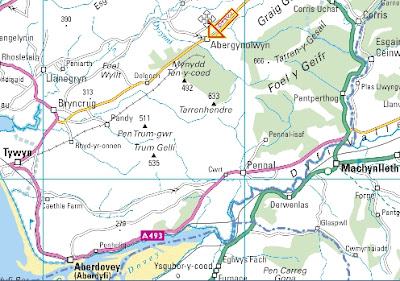 ... in North Wales. Usual arrangements for guarding the Seaton mansions will apply. 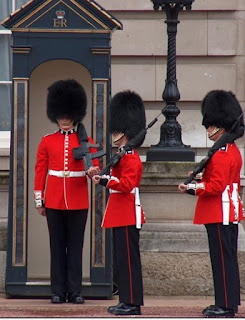 Coming soon to a blog near you; fbb's Christmas Quiz. 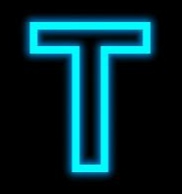 The word "sin" appears in the English language about 1300AD, maybe a corruption from the Latin, maybe not. In recent years some of the more lurid headlines (e.g. My Night Of Sin With The Vicar) have faded from our red-top newspapers as that sort of "sin" achieves an uneasy normality.

In Hebrew the word for "sin" translates more clearly as "missing the mark".

In Greek, the equivalent means "transgression" - "crossing the line". So:-

Biblically "sin" in anything, however small, however serious, that crosses the behaviour lines set by God and based on the Ten Commandments. But still we find it amusing ... 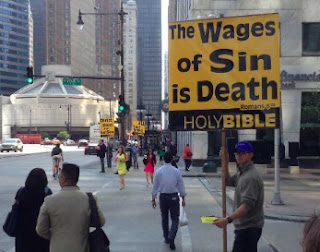 But if we read the whole quote from the Bible, the "deal" becomes a little more understandable. 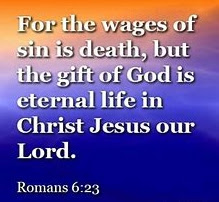 Missing out the second part of the Bible verse is unhelpful.

Whilst the teachings of Jesus about love, caring and giving are all part of our relationship with God, the purpose of the baby-gift of  CHRISTmas  was much more about a long term Salvation.

We all "miss the mark", we all "cross the line", we all "sin" and we all need help dealing with it.

And an amusing tailpiece found on line:- 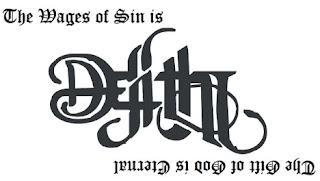 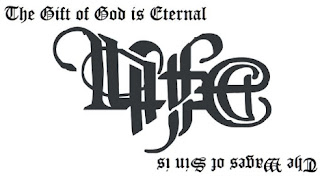