... From the UK's Bus Industry!
Stagecoach Supertram
It goes like this:

Stagecoach announces a new Tram Train timetable from the rail timetable change date with "improvements" (i.e. later trams) but says little about frequency reduction for the early morning period and, significantly, all day Sunday (from a three per hour to a two per hour service)

Stagecoach announces that to allow for "minor work" on the Stadler tram-trains, the service would operate only twice an hour until the timetable change. 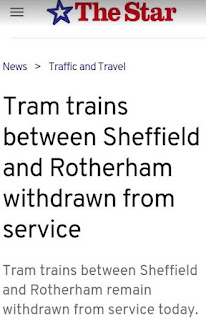 ... with a "not our fault, honest" incomplete explanation. 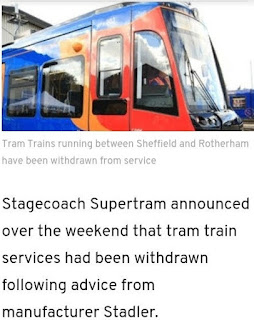 Then, a few days later, a tweet well buried in the Supertram bit of Stagecoach's web site:-

Tram Train services have now resumed with 2 services an hour (i.e. NOT three!) until further notice. Apologies if you have been affected by recent disruption.

fbb has already written about the timetable cut-backs planned for the new year, reducing frequencies on busy cross city routes and the "highly successful" (?) Metrobus network.


In an article on the proposed sale of First Bus, the current (January 2020) edition of Buses magazine gives a hint as to why this is happening and why "trimming" may well continue and increase in the next 12 months. 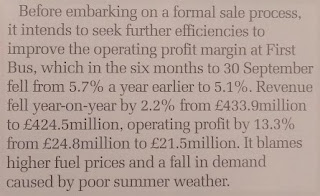 The consequences are made pretty clear!

So our next "Happy New Year" should come as no surprise.

Not that long ago, First closed its depot in Clacton and withdrew from its motley collection of town services. A new mini-network of routes from Colchester was introduced, partly replacing some town sections in both Clacton and Walton. 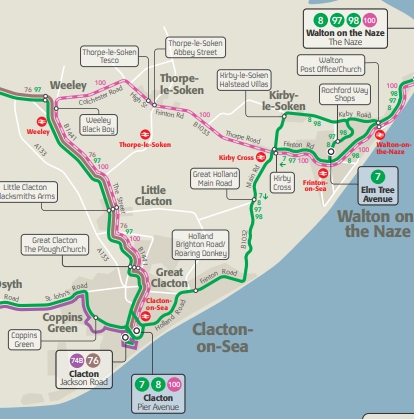 Presumably these have "not performed up to expectations" (euphemism for "have not made enough profit") and both 97 and 98 are withdrawn without replacement from 4th January. This means that First will, effectively, cease to have a presence in these Essex resorts.

GoAhead's Hedingham company will operate 97 and 98 between Clacton and Walton ...

The 98 is already covered by a competitive X74 which will be tweaked slightly. Once again, the mystery is; if First cannot make a go of it, how can GoAhead do better?

City Bus Oxford
We already know that City Bus will withdraw from its X90 London service from the same weekend with Stagecoach adding extra journeys to their formerly competitive London Tube.

So GoAhead don't get it all their own way.

News is also coming of changes to their "Demand Responsive" Pick-Me-Up in Oxford. Its area of operation will be extended to Horspath village. 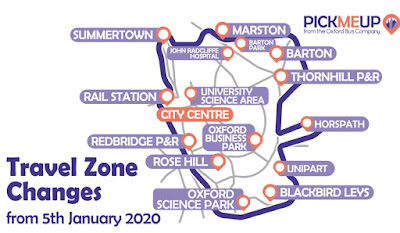 Is this a new source of profitable Uber-style operation? The extension is being subsidised by Horespath Parish Council, so probably not! At the same time Pick-Me-up is being withdrawn from Jericho due to a road closure which makes serving the area more difficult (and more costly?)

Transdev Rosso
Have announced the complete withdrawal of its Red routes, also in January. 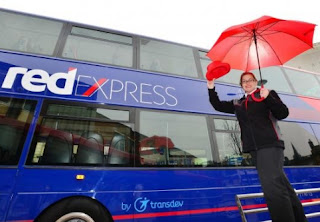 Red Express runs from Accrington to Manchester, originally every 30 minutes by lately reduced to every hour.

Red 4 runs every 15 minutes between Buty and Ramsbottom ...+

... where connects are available into Red Express.

The whole lot goes from the end of January. fbb will look at this change in detail later. Suffice it to say all routes are covered in various ways.

Stagecoach Chesterfield
A smaller  change than the above, but symptomatic of the efforts all bus companies are making in a valiant attempt to maintain their profit margins.

For some time, Stagecoach has operated two all-stops bus services between Chesterfield and Sheffield. 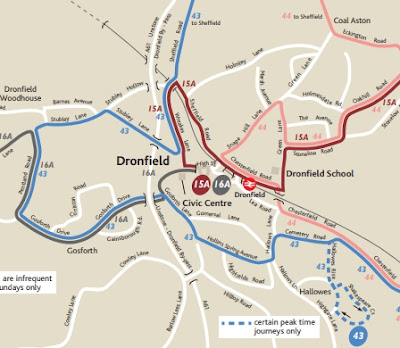 Service 44 (PINK) is currently hourly via Coal Aston whilst service 43 (BLUE) via the vast Gosforth Valley estate runs every 20 minutes. The 43 is branded whereas the 44 is a humbler beast. 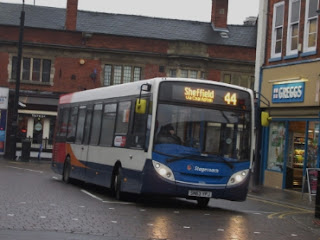 At the end of January, these are re-jigged to reduce the through 43 to two buses an hour. So branding these posh buses have not "performed as expected". Again more detail later.

Sergeant Phil Esterhaus of Hill Street Blues used to end each episode with this phrase. 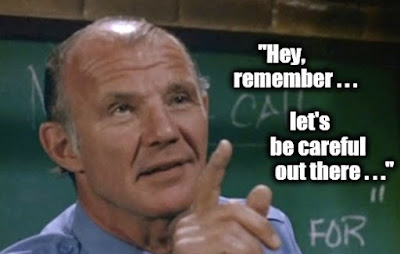 Are bus companies being financially careful? Of course.

Are we seeing that the "commercial model" for public transport is becoming more and more ineffective? 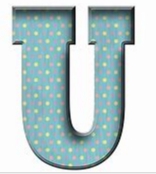 But there is a verse from a well known hymn (The King of love my shepherd is) ...

Thou spread'st a table in my sight;
thy unction grace bestoweth;
and O what transport of delight
from thy pure chalice floweth!

unction
[ˈʌŋ(k)ʃ(ə)n]
NOUN
the action of anointing someone with oil or ointment as a religious rite or as a symbol of investiture as a monarch. 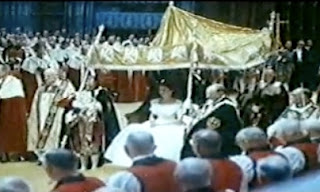 The anointing of a Monarch with oil (here QE2) is so solemn, so holy, that it takes place within a tent or canopy. Others are not allowed to see. This is a symbol of God's blessing and a confirmation of her Divine appointment.

Lets keep it simple; "Unction" is a rich gift from God! And Grace?

Think "grace and favour" residence, usually free (or cheap) house bestowed on a loyal employee (servant, in the good old days) and recognised as a generous gift, not a commercial deal.

God's "rich, undeserved gift" of forgiveness and true purpose for those who turn repentantly to him is what the Bethlehem baby brought to the world at  CHRISTmas .