This is Twerton in 1967 with a fairly typical bus network of the time showing an attempt to serve everywhere with a complex collection of route numbers. 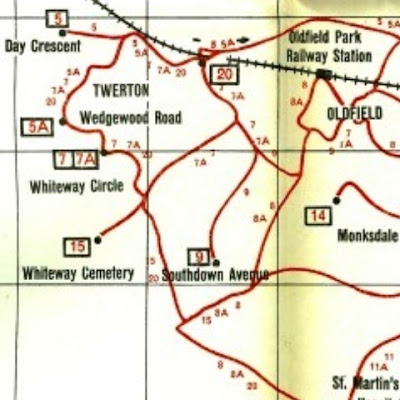 The 5 and 5A run direct to Day Crescent on the Newton Road ... 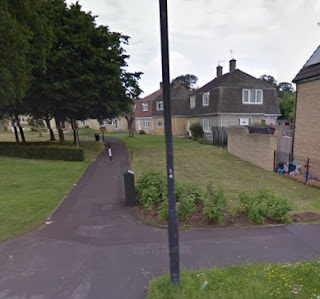 ... now unrecogniseable as a road letr alone a bus terminus! The 5A continued up the hill to Wedgewood Road. 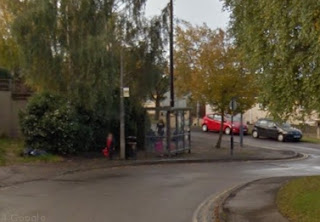 Meanwhile service 7 and 7A (The Whiteway Circle) approached in a more circuitous way and completed a large loop. Today's 5 links many of these bits together. 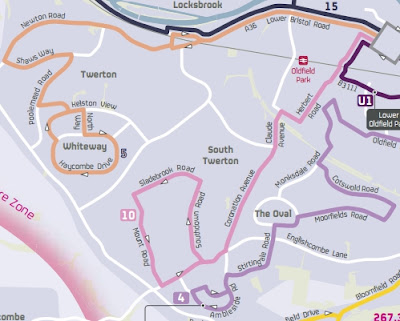 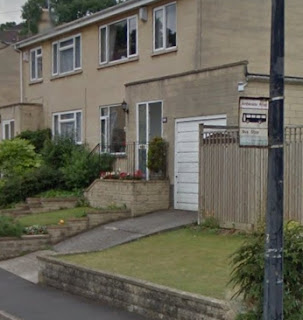 From 4th September the routes in this part of the city are unchanged. 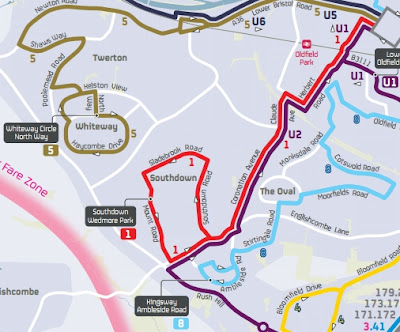 The 5 is unchanged, the 10 becomes route 1 and the 4 changes to 8. This how First Bus explains this on-line.

New Service 5 (Bus Station to Whiteway): The new Service 5 is exactly as the existing Service 5; the route and timetable will remain as they are now.

New Service 1 (Bus Station to Southdown): Service 1 will be the new number for what was Service 10. The route and timetable will remain the same as it is at present.

New Service 8 (Kingsway to Upper Weston):  Service 8 will provide journeys between Kingway and Upper Weston taking parts of what was Service 4 and Service 1 to form the new route.  Buses will run every half an hour Monday to Saturday daytime and every 45 minutes on Sundays and Public Holidays.

The evening an Sunday service 4 becomes an unmemorable every 45 minutes instead of an easily recalled every hour.

Oddments at Odd Down 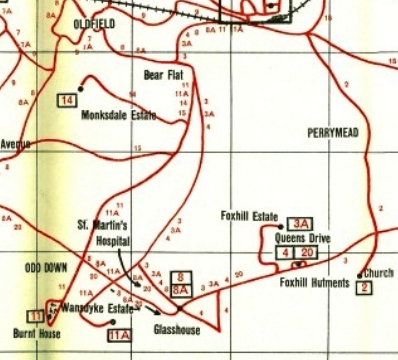 In 1967 route 11/11A ran to Odd Down via Bloomfield Road, 3s and 4s approached via Wellsway, A367. Service 2 ran to Coombe Down Church via Perrymead. The concept of Park and Ride had yet to materialise. 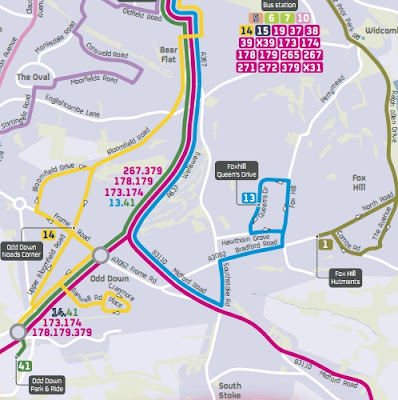 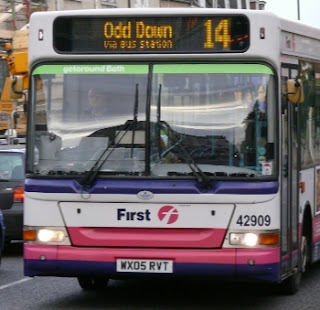 ... the 3 becomes the 13 but the extended 3A has gone. The 2 has become a 1 and it too loops rather than simply reversing near Combe Down Church. 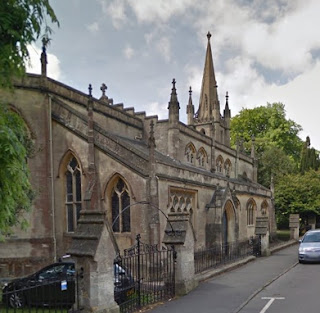 The equivalent stop is now known as Combe Down School. 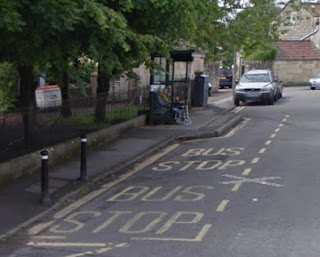 From 4th September this is what the areas's bus network looks like. 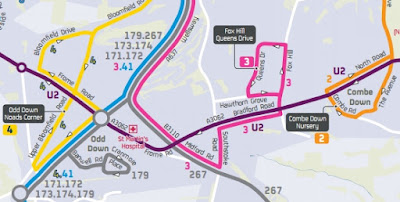 The 14 becomes a 4 and loses its extra little wiggle (via Wansdyke estate) to "country" bus 179; the 13 will be the new 3 and the old 1 becomes the new 2, reverting to its 1967 number. Again here is the First Bus on-line explanation.

New Service 4 (Weston to Odd Down): Service 4 will be the new number for what is currently Service 14. The route will change slightly, as will the timetable. Specifically, following complaints about too many buses traversing the estate, Service 4 buses will no longer divert via Banwell Road or Cranmore Place in Wansdyke

New Service 3 (Foxhill to Bathford): Service 3 will be the new number for what was Service 13. The route and timetable will remain the same as it is at present.

New Service 2 (City Centre to Combe Down): Following what was the route of Service 1 between the city centre and Combe Down, Service 2 will run between Dorchester Street (the stop outside the bus station), Widcombe and Combe Down.

Sunday buses on new route 2 will increase in frequency from every 45 minutes to every 30. Otherwise times stay much the same.

Bath plus Ford and Easton
To complete this first look at Bath changes, we go back to 1967 and the routes to Batheaston and Bathford. 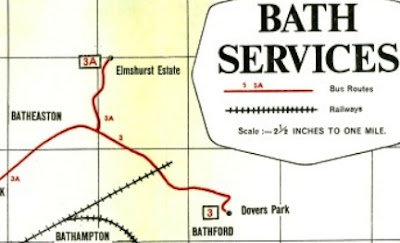 Separate 3 and 3A eventually merged and became 13 serving both "legs". 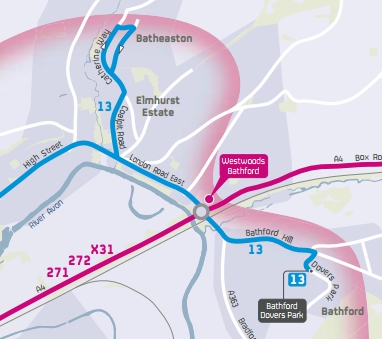 The September change leaves the timetable unchanged but takes us back to the traditional number. 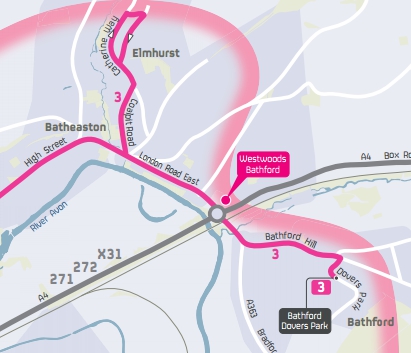 In passing, note the cartographers' different view if where Batheaston and Elmshurst (Estate) are. Batheaston and its High Street are correctly shown on the newest map. Elmhurst is a road name ... 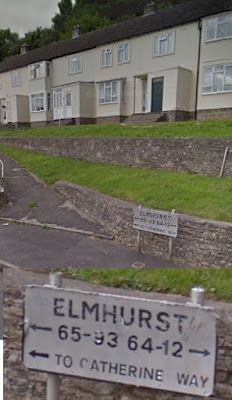 ... at the top of Coalpit Lane. The bus turns via a loop of narrow roads all called Catherine Way. 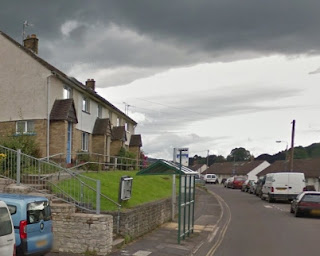 fbb is sure the locals understand, but for an outsider looking it it is a bit confusing. The terminus at Bathford is a little easier to follow. The bus turns off the High Street into Dovers Park ... 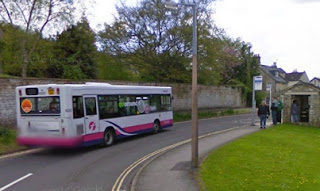 ... and reverses just a few yards into the little block of housing. Presumably crowds of passengers are rare, hence the diminutive size of the shelter! 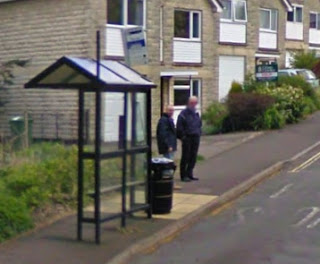 So far, there would appear to be very little change for the majority of services so far explored apart from a bit of route renumbering. 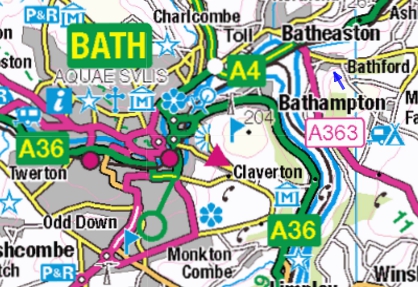 The on-line map of the new network is very clear as is the description. The big question, however, is, "How good is all of this in printed form" because that's what the majority of Bathites (Bathers?) will hope to obtain.

We will extend our exploration tomorrow.