fbb has lost his old codgers bus pass and is in the process of applying for a replacement; so was too mean to pay the cash bus fare. And, anyway, the transit from Waterloo to Euston is a simple dash up the Northern Line; easy peasy.

From London Waterloo take the Northern Line (Northbound, Platform 1) which is a direct service to Euston Underground Station.

Even the National Rail journey planner said it was easy.

Of course fbb checked the SouthWest Trains web site and noted that there was some disruption to the Northern line. 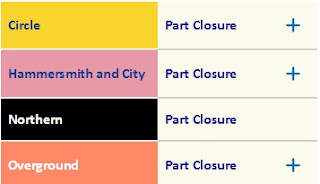 There was no "+" to click, so the assumption was that the problem was not likely to be serious. London Underground wouldn't do anything drastic to lines in the middle of town on a holiday weekend, surely?

Things did seem strange as the elderly couple nipped on auto pilot down to Platform 1 of the Underground complex at Waterloo station. The escalator was empty and the platform was nearly deserted. 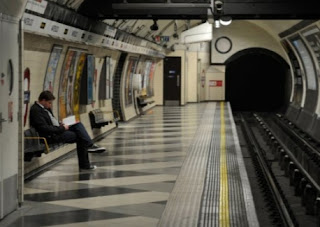 The departure screens showed this:-

Ten minute gaps? Terminating at Charing Cross? Clearly fbb had missed something. Even in the worst days of Northern Line misery, it was never as bad as this.

There were no announcements, no staff on the platform and, as far as fbb could remember, there was no indication on the concourse above. Perhaps he simply did not look in the right place.

After a brief period of bewilderment, a decision was taken. 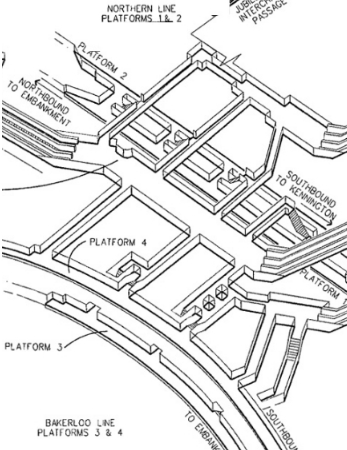 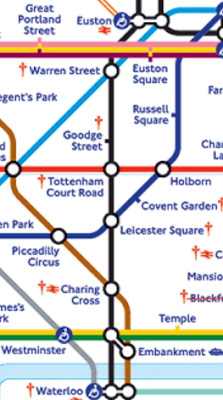 Both the Bakerloo and the Victoria line trains were announcing a lack of Northern line services and somewhere en route fbb espied a poster. 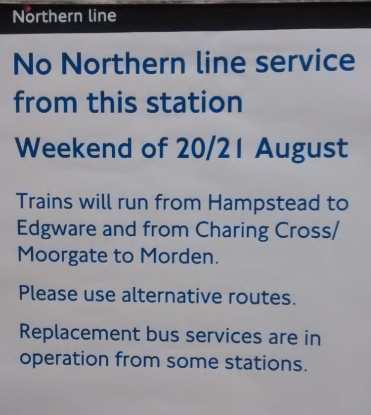 It was not particularly helpful, but it did, at least, explain what fbb had missed at Waterloo. Or had he? Surely, at an important interchange like Waterloo, there should have been announcements, staff on the platform and clear guidance as to how to get round the problem.

If there was a poster, it wasn't obvious and even if fbb had seen it, there was no guidance as to the implications and alternatives.

Of course! Silly fbb! It's all on line.

When the slightly stressed twosome had arrived in Largs, enjoyed a much needed cuppa and refreshed their appreciation of the gorgeous views from the window ... 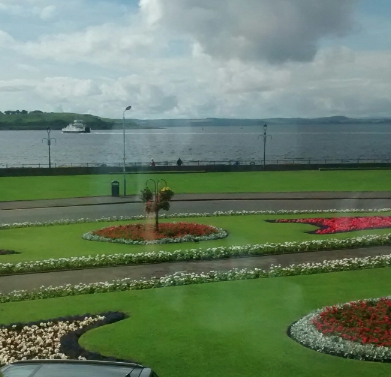 ... fbb logged on. The TFL pages had the same diagram as SouthWest Trains but the Northern Line panel did have the "+". 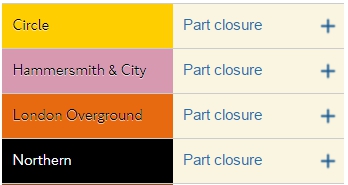 Clicking on the panel was a revelation!

Would it have helped for a journey from Waterloo to Euston?

Not in the slightest. It would appear that poor confused folk arriving at Waterloo had to sort it out for themselves. The was a map on-line ... ... which showed the bits that were closed as solid and the bits that were open as feeble grey. Surely it would have been clearer the other way round? But the map didn't show the buses, not that any of the bus services listed (as above) reached Charing Cross.

It wasn't just the fbbs. At Oxford Circus, they met a "mature" luggage-encumbered lady attempting to get from Guildford to Manchester. She had been advised to do what the fbbs did, but was very uneasy. She was delighted to join the fbbs in the trip on the Victoria line.

There is no doubt, even if the usually savvy fbb missed a poster, that this disruption was badly explained "on the (under)ground". Visitors to the Capital would have found it hard to understand what was going on. More staff, please, London Undeground and/or Transport for London and bigger and better signs at all appropriate points on the system.

But now for something completely different. 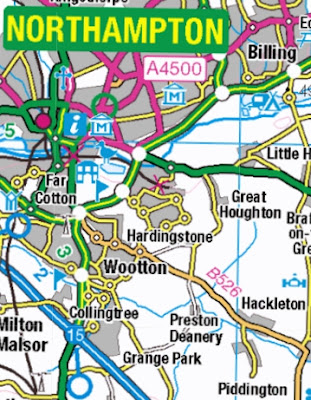 There it is, bottom right, just off the old (pre-M1) London road. Currently served by Stagecoach Northampton service 3 ... 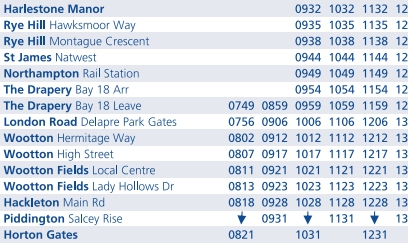 ... and rarely, if ever, needing a double decker, the little village was graced by TWO such buses at the same time (1531) on Saturday last 20th August. 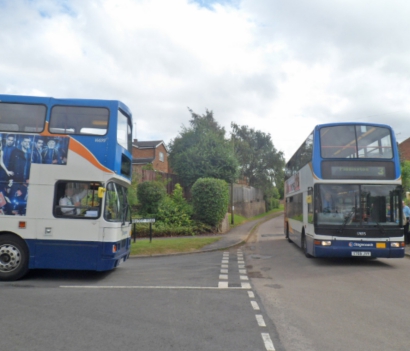 The schedule was a farewell to the last vehicles of the type, nicknamed "Ollies". 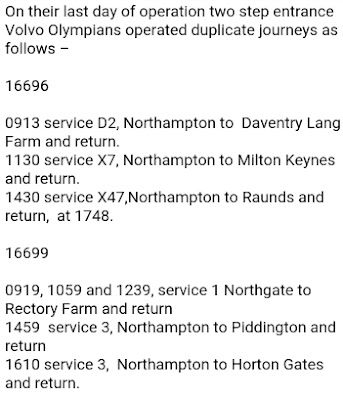 And here are the two in Drapery Northampton. 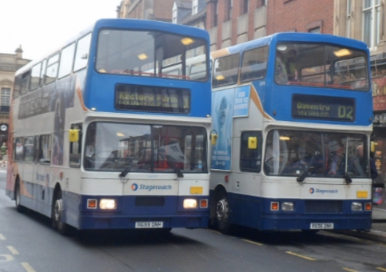 Thanks Stagecoach, for the nostalgia-fest.