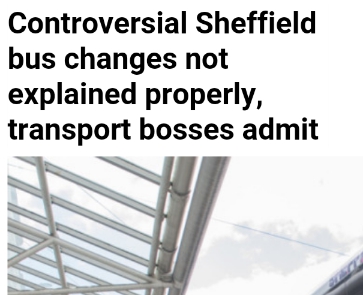 ... and you might have guessed - it's Sheffield. Why is fbb not surprised about this. What is nore interesting is that this is nothing to do with printed publicity, lack of publicity or just plain wrong publicity because as the middle of last week there hasn't been any.

And the controversial change? Since the atrocious mishandle bus cut-back of November 2015, publicised as an improvement (!!), ANY bus change is controversial. The public, althopugh making the best of as bad job and coping (because they have to) have lost all confidence in the bus operators, the City Council and the Passenger Trabnsport Executive akak Travel South Yorkshire.

Above all, the good Sheffield folk are profoundly suspicious of anything that comes in the name of the Sheffield Bus Partnership. 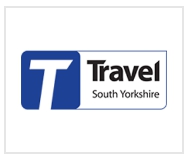 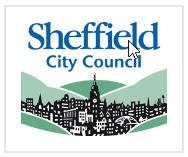 There was a rumour that T M Travel, which has a big presence in the City as an operator of mainly tendered services, had joined the club. But if they have it is a state secret!

So what has caused the headline in the local paper? 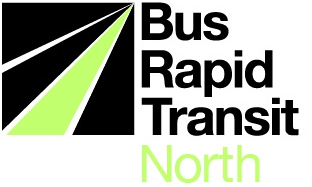 Well, now; this is what has been announced map-wise. Note the pretty purple stops and route in Central Sheffield. 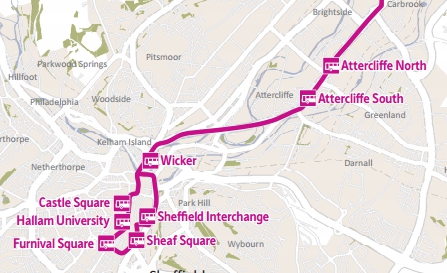 And this is what is happening from 4th September. 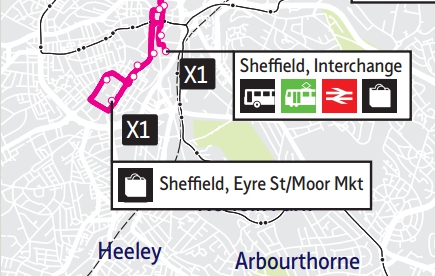 It looks a bit different. The little blobs are the stops and they are quite different from the proposals.

Travelling further north we have another divergence. 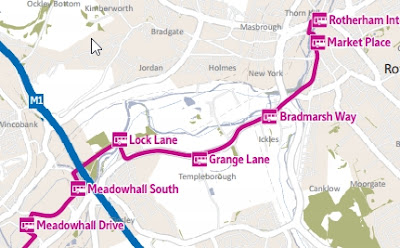 As expected buses will start using a new bit of road ... 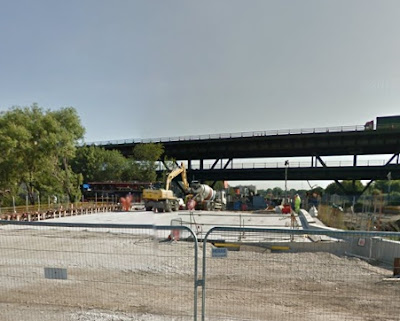 The new link under construction.

... which bypasses the cloggage at Junction 34, where the M1 disgorges and devours traffic at the southern end of the Tinsley Viaduct. 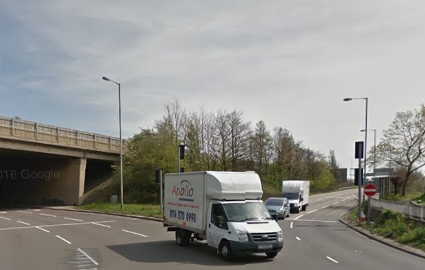 Google Streetview must have rolled by very early on Sunday morning! So the neatly named Bus Rapid Transit North takes this new bit of road to speed itself swiftly (OK swifter that the old route) between Sheffield and Rotherham

That was (maybe still is) the plan. But a look at the change from September shows a very different map of the diversion.

The new route runs via Meadowhall and then uses the new link.

Bus Rapid Transit (BRT) North is a high quality and efficient public transport service that has been developed to help people travel into and between the centres of Rotherham and Sheffield. It will provide access to existing leisure, commercial and manufacturing facilities as well as facilitating economic growth by providing links to existing and proposed employment sites in the Lower Don Valley.

BRT North will improve the customer experience by raising the quality of the bus offer, as well as improving capacity, reliability and quality on the bus network. It will provide essential congestion relief for local traffic at junction 34 south of the M1, through the creation of a new highway link under the motorway at Tinsley.

Maybe the change in September isn't BRT North at all; maybe it is a sort of BRT "Lite". Or maybe BRT has faded from the minds of the politicians and this is a cheaper version. We are not told.

But this dilution of a grand and impressive scheme is, surprisingly, not what has provoked the "controversial" label.

Let us read on from the headline. 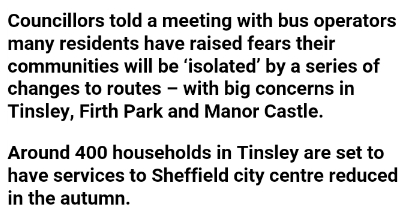 So something's up in Tinsley ...

... and the Partnership isn't!

The boss of Stagecoach told the councillors ...

... which is a bit odd as Stagecoach is not responsible for ANY of the "controversial" changes.

fbb has studied all the proposed changes for the autumn and so will try to unravel the concerns. Your cheery chubby chappie reckons that when the whole truth of the Tinsley Trauma is revealed, councillors and the electors will be even more incensed.

So tomorrow we will take a trip to Tinsley and see what the fuss is all about.

We will need to go right back to the days when most Sheffielders travelled by tram. 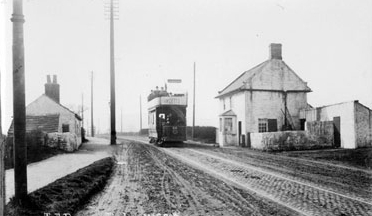