Doon Across the Watter to Rothesay

Largs to the Islsnd of Bute via Wemyss Bay 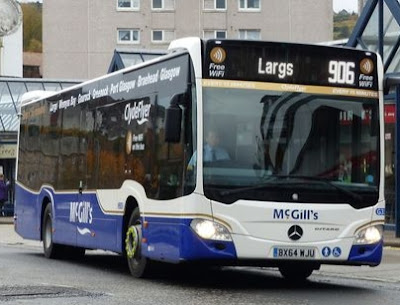 McGills publicity says "every 15 minutes" to Glasgow by 901 or 906. But on Monday to Friday it doesn't quite work out like that. 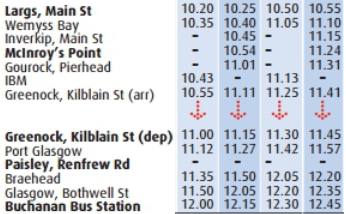 Additionally, at xx23 and xx53, you have Stagecoach's Clyde Coaster from Ardrossan; so three buses in five minutes, then 25 minutes to wait. The fbbs boarded the 1020 and were sold a zonal day ticket for £5 as it was cheaper than a return. You soon realise the benefits of "free" travel for the old 'uns (in England) and you also wish the National scheme were national. Nicola hasn't declared UDI yet!

But the interior of the fbb's chauffeur driven Mercedes was very comfortable ... 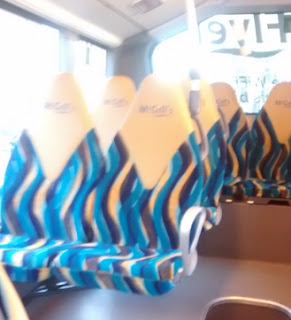 ... and the views were superb. 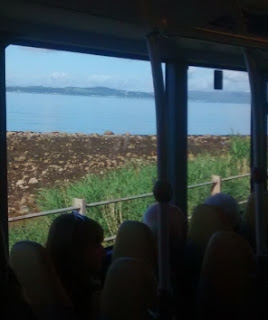 That blue-grey line in the distance is the Isle of Bute. Without a doubt, one of the delights of this "sail" is the magnificent restoration of Wemyss Bay station and ferry walkway. It is thanks to tireless local efforts and campaigns that this wonderful building has been preserved where others, say at Gourock, have been replaced by much smaller facilities.

The circular ticket office still sells tickets for the trains, just one departure every hour. 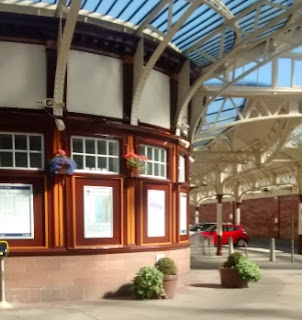 Other parts of the building are in use; there is a bookshop ... 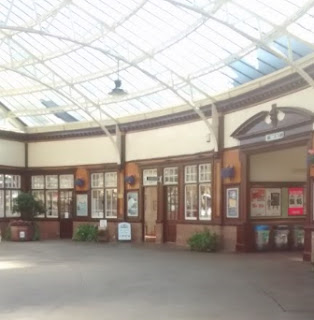 ... a cafe and a superb display of old travel posters in the entrance archway. But the highlight is the vast curved and covered walkway from platforms down to the ferry ... 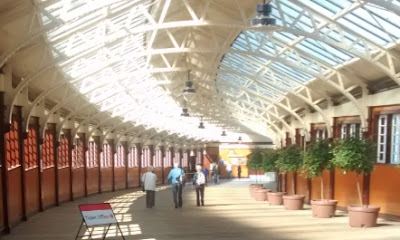 ... essential, as you can see, to cope with the crowds waiting for the 1100 departure. The vessel was the MV Argyle ... 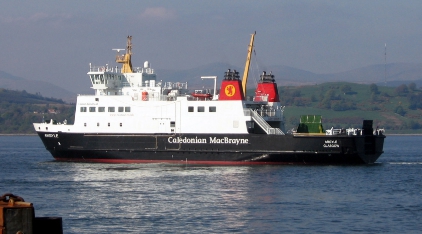 Built in Poland, she was launched on 12 September 2006. Following delivery, the fitting out process took into account design modifications based on lessons learned from sister ship MV Bute. She was formally named at Rothesay Bay on 4 May 2007 before joining the Caledonian MacBrayne fleet later in the month.

After a cup of coffee in Rothesay's Electric Bakery ... 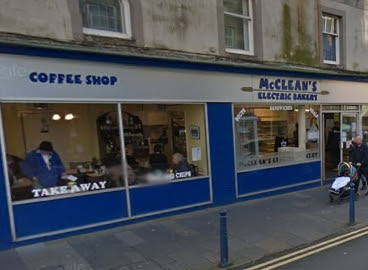 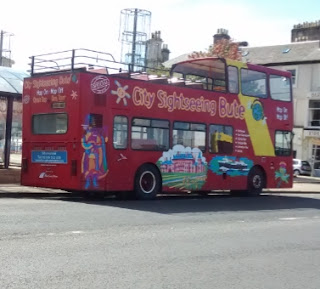 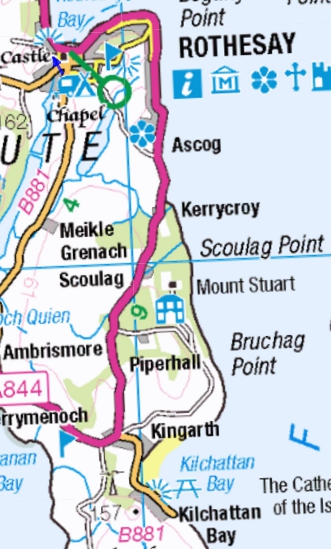 A blog correspondant mentions the three piers on Bute, additional to the main one at Rothesay.

The bus passed Craigmore Pier, no longer equipped with a pier ...

.... but with the landward buildings now a smart little Restaurant. 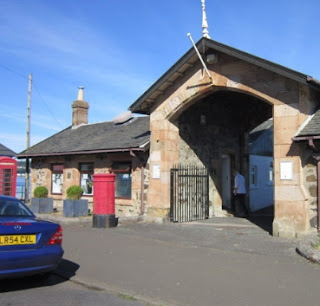 The service 90 (tendered journeys are numbered 490, but exactly the same as the 90) continued along the coast ... 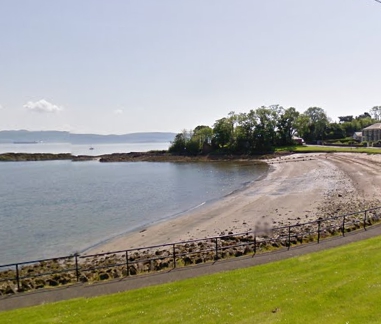 ... until diverting inland to skirt round the Mount Stuart estate. 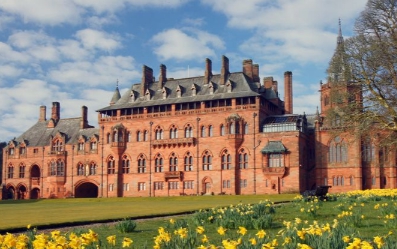 Mount Stuart House on the east coast of the Isle of Bute, Scotland, is a Gothic Revival country house and the ancestral home of the Marquesses of Bute. It was designed by Sir Robert Rowand Anderson for the 3rd Marquess of Bute in the late 1870s, replacing an earlier house by Alexander McGill, which burnt down in 1877. 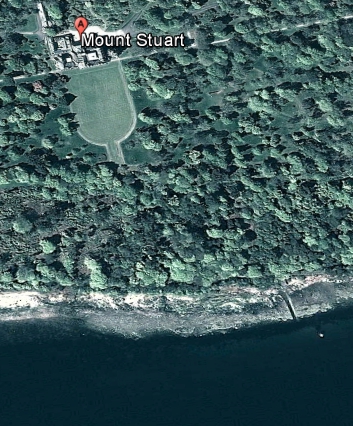 The House itself is not visible from road or bus, being designed for great views over the sea and imposing views from water. But the bus diverts via car park and entrance building/visitor centre when the estate is open, as it was whilst the fbbs rode past. 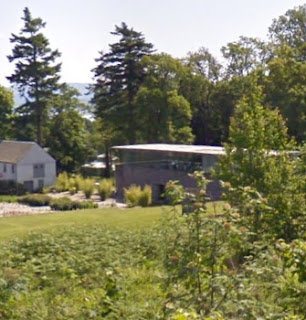 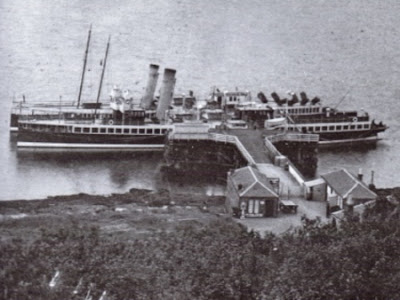 ... with, once again, the on-shore buildings remaining. 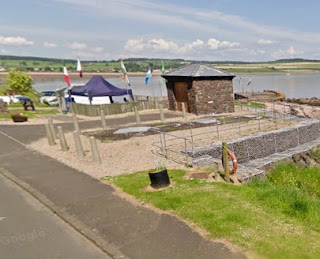 But after the string of sea-front houses that is the village of Kilchattan bay, there comes nothing. The road ends ... 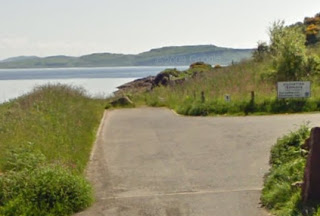 ... fittingly with a turn-around for the No. 90/490 bus. Although running 10 minutes late due to having lots of those awkward creatures, namely passengers, the driver allowed fbb to photograph sign ... 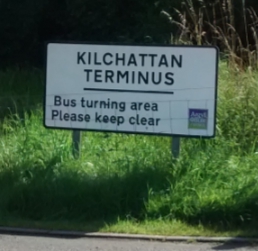 ... and bus before riding swiftly back to Rothesay. 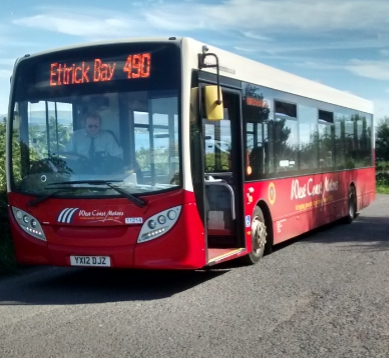 Had the old crusties stayed on the bus after Rothesay, they would have followed the tram route to Ettrick Bay, passing close to the third defunct Bute pier at Port Bannatyne. 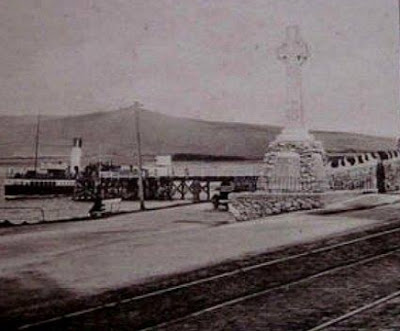 Sadly, like the trams, this facility is utterly defunct ... 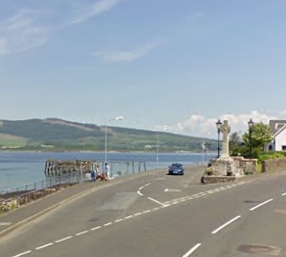 ... with nothing remaining of booking office and/or waiting room. 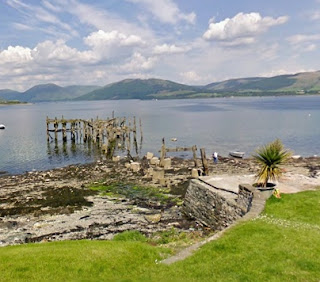 But the pier remnants do serve to remind us that pre-motor car, pre-bus and often pre-roads, these steamers were the lifeline of the community; bringing passengers and goods, carrying mail and animals to market - all before leisure travel had been thought of.

Life moves on and the good old days were perhaps not so good after all.

The fbbs returned to Rothesay, Wemyss Bay and Largs by outward route reversed. The original plan had been to travel later over to Bute and purchase a single ticket back to Largs on The Waverley, due away from Rothesay Pier at 1815. 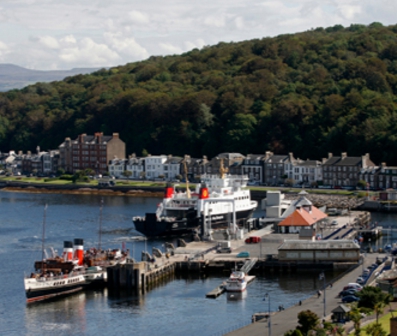 That was until the miserly old man found out the price.

Tomorrow we mop up a few Rothesay snippets. Meanwhile the fbb's returned to Seaton yesterday, again, as outward route reversed; but with less stress we guess. Bless!

[The above sentence was written in advance of the homeward journey; which didn't go as smoothly as predicted : full explanation later in the week. It wasn't as bad as it might have been.]