There is a danger that, having spent much fine gold on stressful rail travel and much fine gold on renting the flat, you could be temped to pack each day with frenetic activity. For reasons which are unclear, Mrs fbb is not entirely enthusiastic about spending day after day on trains and buses.


But Largs does, indeed, offer many, many opportunities to de-stress. 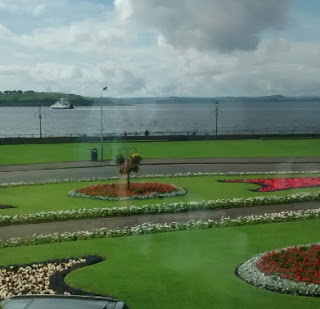 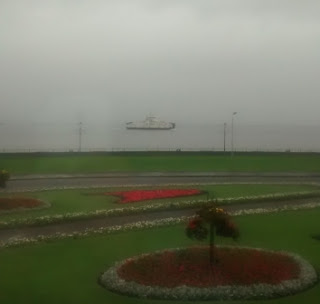 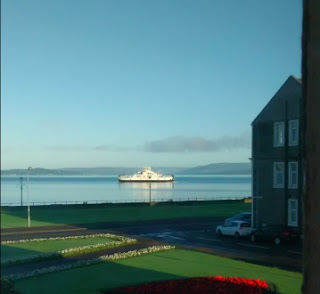 ... and especially with the setting sun! 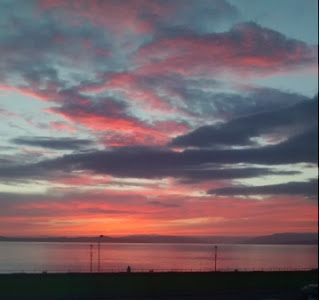 For those unfamiliar with the geography, Largs is on the Firth of Clyde southwest of Glasgow. 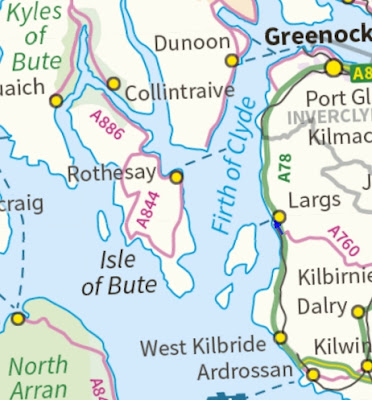 The nearest lump of land is the Island of Cumbrae (hence the ferry) but beyond is the bigger Isle of Bute and further still, the Kyles thereof. On a clear day the peak of Goat Fell on Arran an be spotted beyond the Cumbrae.

Two years ago, fbb blogged his ride on the Cumbrae Ferry and little has changed in the intervening 24 months. See "Languishing in Largs [Day 7]" (read again).

But this time, much use has been made of www.vesselfinder.com 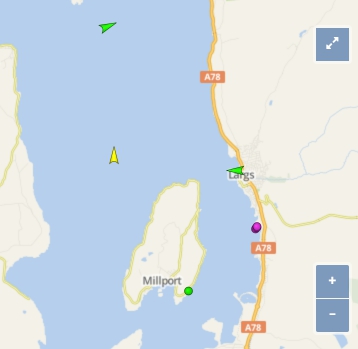 It tells you what is sailing, naming the vessel and often including a photograph. This screenshot was taken early-ish yesterday morning and shows our little ferry as a green arrow (for passenger vessel) just leaving Largs. The top green arrow is the ferry from Rothesay to Wemyss Bay.

The yellow arrow is a cargo boat making for Glasgow and the green dot at Millport (Keppel Pier) is the Paddle Steamer Waverley not yet awakened from its overnight snooze. 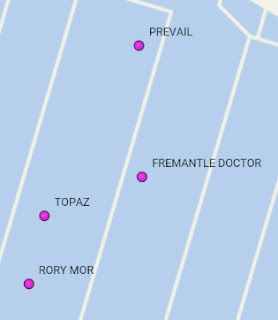 All this can keep an old man happy for hours!

Then there is Waverley Spotting as this fine ship calls at Largs Pier on many of its cruise routes. 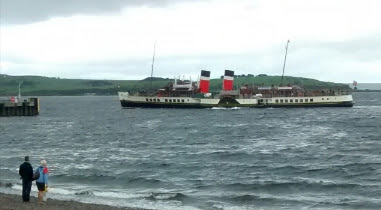 Here she is at the pier with the spare Cumbrae ferry. 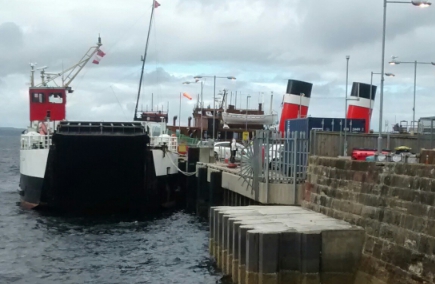 This was Monday 22nd, and she was about to depart (35 minutes late!) for cruise round Ailsa Craig, not an overweight Scottish actress, but a huge lump of ex volcano just off the coast at Girvan. 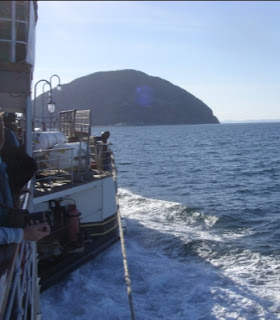 But there is more to Largs than ferry-watching. 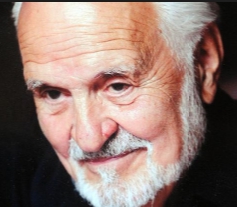 For most of the latter half of the 20th century, Aldo Nardini and his brother, Pete, reigned unchallenged as “the ice cream kings of Scotland”. 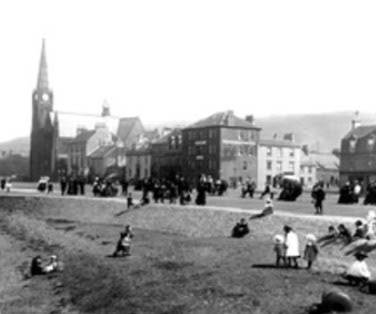 Largs before Nardinis
Nothing to the left of the Church

Their white, art-deco café, Nardini’s, on the Largs esplanade next to the historic red sandstone St Columba’s church ... 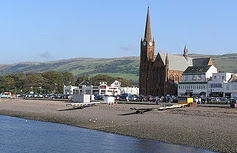 ... put the little Ayrshire tourist resort on the map before Aldo’s daughter Daniela, now a much-in-demand actress, was even born. 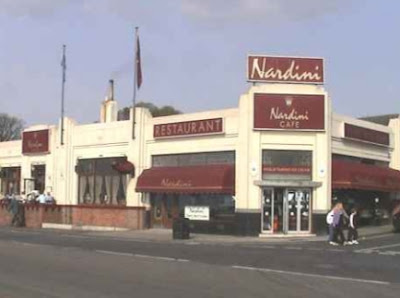 When fbb wa a-courting Mrs-to-be, parents-in-law proudly took the somewhat less chubby one to this icon of Largs for a coffee. He would have preferred an ice cream sundae, but that was not on offer. The interior remained in 1930s style complete with basket-weave chairs and tables and, of course, waitress service.

It was in the late 1990s that Aldo and his brother had a falling-out over the future of the café. Peter brought in an outsider, David Hendry, as a partner and Aldo was unceremoniously ousted from the board at a meeting he said lasted 30 seconds. He was shocked and hurt by what he called his brother’s “treachery” and the two rarely spoke thereafter.

In retirement, he remained hurt but was eventually proved right when the Nardini’s run by his brother and David Hendry went pear-shaped in 2003, was left abandoned for several years ... 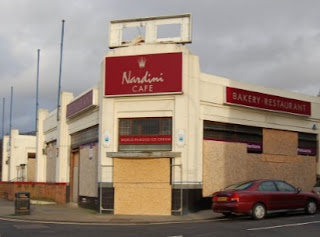 ... until finally being refurbished and re-launched in 2008, much to Aldo’s chagrin, by non-Nardinis.

The interior has been upgraded but retains the original style, and the huge ice cream counter has to be seen to be believed. At least 32 flavours are offered at any one time. 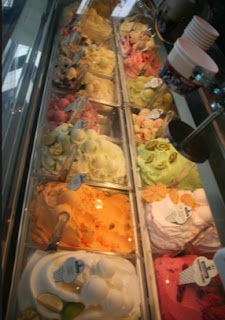 A visit from the fbbs is part of the de-stressing! This year the company was promoting its "Freak Shakes"; milk with loads of stuff added and served in appropriately decorated mugs. Four sumptuous flavours were on offer:- 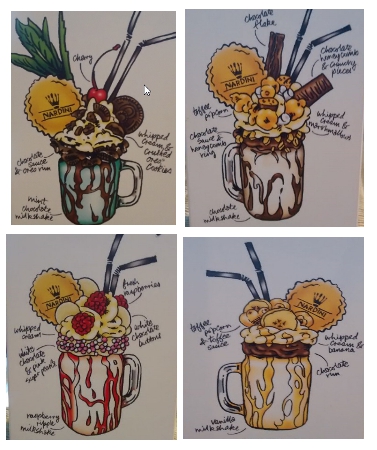 From top left and reading clockwise:-

And which example of delectable joyousness did fbb choose? With an eye on Mrs fbb and another eye on the already swollen waistline ... 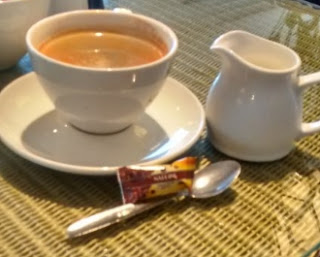 ... an Americano with cold milk!

But there is an added bonus with a visit to Nardinis. If (a big if - the caff gets very busy in the Summer) you can engineer a table in the "sticky out bit" at the far end of the building ... 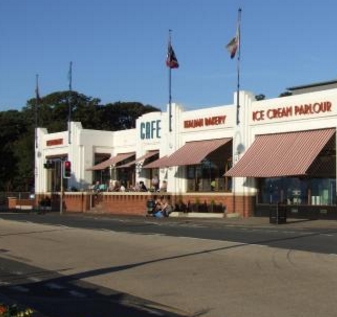 ... you get an excellent view of the passing buses as you linger over your latte.

But do not go to the "most comprehensive guide to Largs on the web" ...

... for bus services; it is not comprehensive; unless you allow the epithet "comprehensively WRONG". fbb commented on a list similar to this two years ago. It hasn't changed.

McGILLS
Bus service number 906
Largs to Greenock town centre, one route goes via IBM, another via Gourock. Other stops include Skelmorlie, Wemyss Bay and Inverkip.
Still runs a 906 but to Glasgow, joined by a 901

For the record, and while you contemplate your cappuccino, you can see (Monday to Saturday):-

2 Stagecoach 585s in each direction 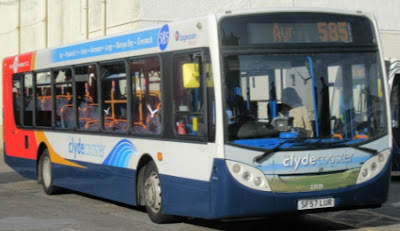 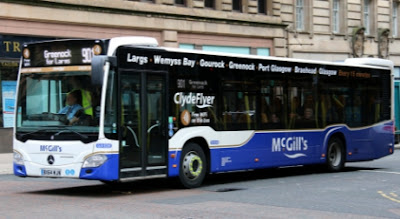 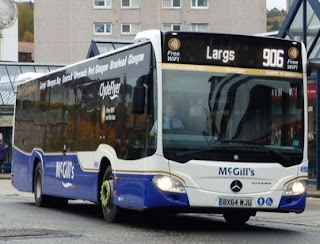 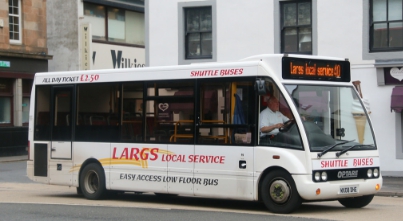 Surely enough to keep you going as you enjoy your Espresso.

And a farewell to Waverley as she sailed away from Largs in the setting sun yesterday; off to her final call at Keppel Pier Millport (Isle of Cumbrae) before sailing to Gourock for a good night's rest and the start of today's (Thursday's) cruise. 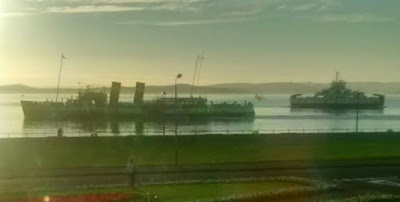 Next Largs-based blog - Friday 26th August
Posted by fatbusbloke at 02:00