Timetables Telling the Truth? Or Not?


The history of services crossing Pont Hafren (The Severn Bridge) is complicated and fbb was only able to offer a very broad and confused overview in yesterday's blog (read again). The comments added to "Publicity Hazard : Pont Hafren" episodes [2] and [3] have been most enlightening : thanks, all.

It is today's service pattern and how the information is presented that we now consider. 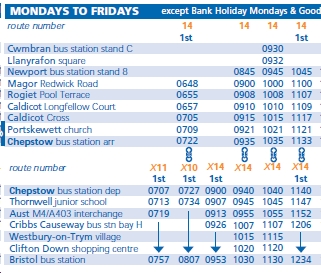 Stagecoach gets it nearly right, so we had better start there. The service between Newport and Bristol is jointly operated by First and Stagecoach; indeed this overall structure has remained unchanged for many years.


Thanks to really silly interpretation of Drivers' Hours regulations, the through service has been split into two; then both operators lie through the teeth about offering "guaranteed connections" between the X14 and the 14 at Chepstow. Twaddle! It's a through service; always has been; always will be.

But the ever sensible (?) Traveline South West fails to grasp this salient point and treats the X14 ...

... and the 14 as separate routes with separate operators, so (with X10 and X11) provides the enquirer with SIX separate tables ...

... and so, of course, fails to find any through journeys! 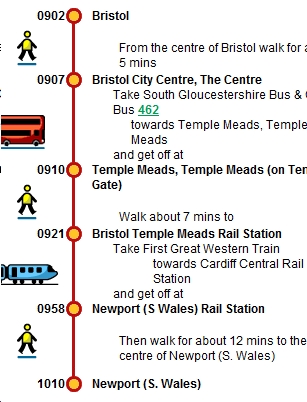 But, be fair, fbb; (why?) if you remember to "switch off" coach and train options, it does graciously find the X14/14 combo; but still tells you to change buses at Chepstow.

And, before we move on, Monmouthshire's version of the timetable doesn't mention connections at all ... 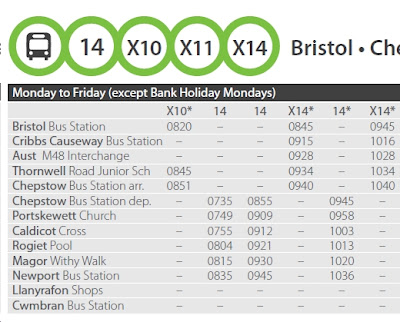 ... and South Gloucestershire's effort insists on a change of bus ... 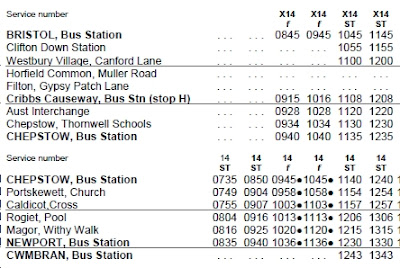 ... only for Stagecoach trips. With First, you can travel through, as indicated by the black blobs and a note at the foot of the table!

Whereas the Bristol version doesn't admit to service 14 at all ... 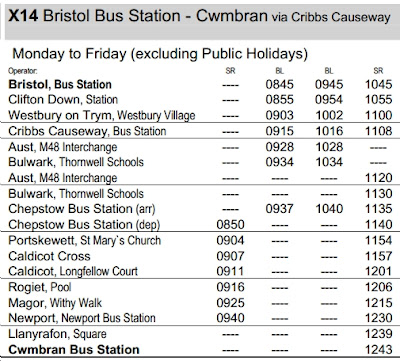 ... the journeys are, apparently, numbered X14 throughout. And the 0850 from Chepstow actually runs at 0855, probably.

We really do need a breather, so take some pills, enjoy a good night's rest and come back tomorrow to tackle some more baffling confusion. Meanwhile, we have so far discovered that, as a source of timetable information ...

But let's end todays blog with a refreshing picture of a Stagecoach X14, chuntering through Chepstow. 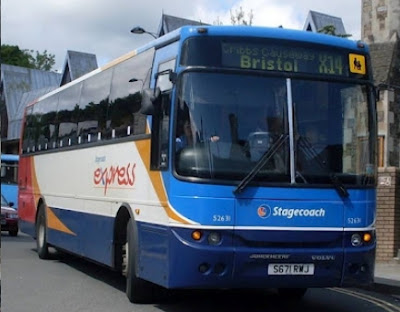 There now, that's better, isn't it; and this one's even snazzier - and newer ...

In a terrible omission, fbb has, so far, forgotten to give Chepstow its "proper" name which is, of course,  Cas-gwent . Sorry, welsh speakers!

Next Blog : due Thursday March 22nd
We pause from Pont Hafren
to take an advance glance

at the Gosport and Fareham "BRT"
which opens one month from today!
Posted by fatbusbloke at 00:54