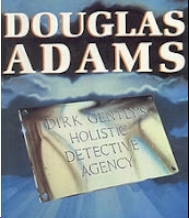 As well as being famous for the cult book / radio series / TV series / film, "The Hitchhikers Guide to the Galaxy", Adams wrote the above. It continues his theme of including extreme scientific theories as part of the plot, by creating Dirk Gently (played, excellently, by Stephen Mangham). 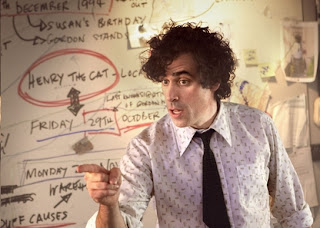 He runs a private investigation firm, using his "skills" at interpreting the "Interconnectedness of Everything."

One day, Edward Lorenz, a meteorologist at the Massachusetts Institute of Technology, changed one of a dozen numbers representing atmospheric conditions, from 0.506127 to 0.506. That tiny alteration utterly transformed his long-term forecast, a point Lorenz wrote about in his 1972 paper, "Predictability: Does the Flap of a Butterfly's Wings in Brazil Set Off a Tornado in Texas?"

"Dirk Gently" currently has a series of episodes running on BBC4, the first was on Monday, last. Sorting out bus and train travel tends to need the same seemingly illogical and far fetched processes. 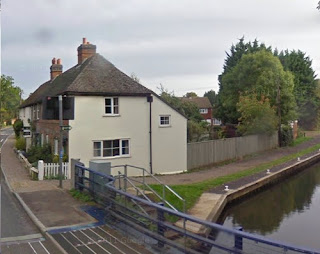 ... on the Kennet and Avon canal between Newbury and Reading. Aldermaston village is one-and-a-half miles to the south west of Aldermaston Wharf, now a small but thriving village in its own right. Thus it happens that Aldermaston Station, on the "Berks and Hants" line ... 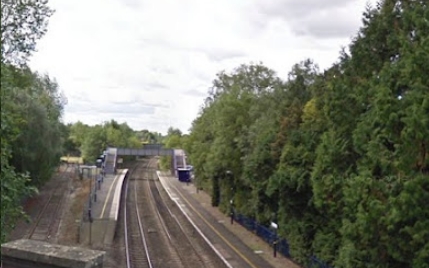 ... is at Aldermaston Wharf. Even the great Great Britain Bus Timetable managed to get it wrong way back in 1998. 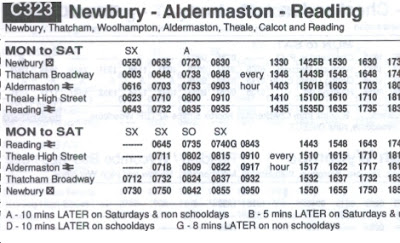 These buses did NOT go to Aldermaston but they did stop on the A4 at Aldermaston Wharf, just round the corner from Aldermaston station.

A mile or so further west is the little community of Woolhampton, sitting prettily on the A4 ... 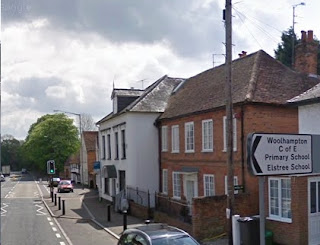 Turn right in the village and go down Station Road for just a few yards and ... 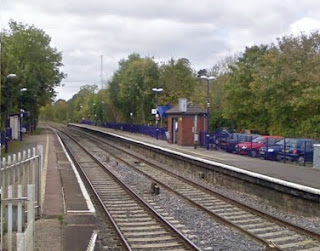 ... you will find a delightful railway station. But it's called Midgham and not Woolhampton. Midgham village is just off the A4 and a little over a mile further west.

So when fbb read these names ...

... in a table in the excellent and comprehensive West Berkshire book, he was profoundly suspicious. Three different stops for Bucklebury seemed an awful lot for a little village. So, yet again, we need an fbb map ... 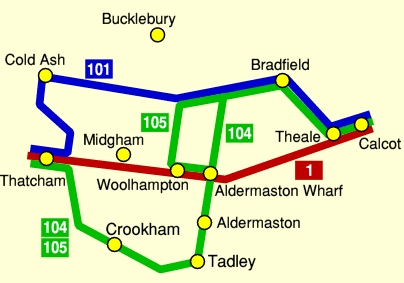 ... which suggests that Bucklebury doesn't have any buses at all!

First we need to understand what bus services do exist on and near the A4 corridor between Reading and Newbury. The main road route (in 1998 numbered 102 and 103) now runs every 30 minutes as Jet Black 1, but the "back road" routes have never been particularly frequent. The 101 is little changed from then ... 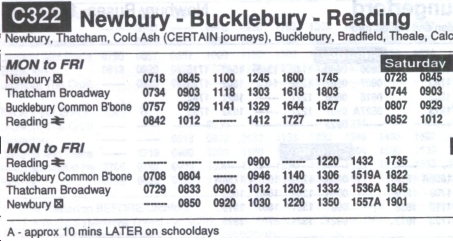 But in the 1998 GBBTT table C322, buses appear to run to "Bucklebury", shown as "Bucklebury Common B'bone", whatever and wherever that is. Did buses serve that tiny little village then, but not now?

All will be revealed tomorrow! Everything is interconnected.

During last week's blogs about Oxford,

fbb failed to note that March 7th was

the   25th Anniversary  of Stagecoach's

Next Blog : due Sunday March 11th