-----------------------------------------------------------
Deer Auntie Flo
Thank you for the generus birthday gift you sent me. I have put it to wards a new mobile phone. It is called a smart phone and everyone has got one. It has a 5 meggapixel camra and it can store over 600 pictures. I can play my mp3 downloads on it and listen to the radio. Best of all I can acess the internet on the go and play games.
You should get one. It will make life easier for you when you go to kidlington for tea with missis joans every wensday. No more waiting for busses in the rain.
Once youv learnt to use the keypad for your digitul telly, I will call round and show you how the smart phone works. It is really cool.
Thank you very much
Lots of Love
Nigel XXX
P.S. I can also make phone calls and send txts
P.S. Hows your arfrightus arthwriteus sore leg

What could Auntie Flo discover on-line to assist her journey from central Oxford to Kidlington? 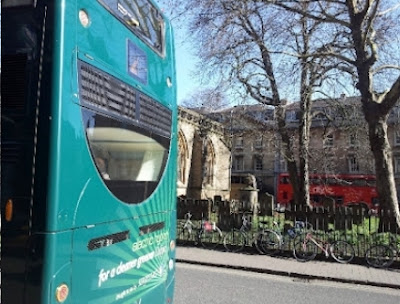 Stagecoach waiting and, in the distance, Citybus loading.
Photo taken at approx 1100 on Tuesday 7th March
Some while back, in an outbreak of altruistic excellence, Oxford Bus and Stagecoach were cajoled (bullied?) into an agreement by Oxford City Council. Where there was wasteful competition, they would introduce a joint timetable, provide better buses and generally be every so jolly helpful to the public; and that includes Auntie Flo.
Actually the deal meant that the two companies reduced their costs and, probably, increased their profits by running less buses. It was a no-brainer!
The new unified route 2 group is still very frequent at every 5 minutes; but for Kidlington residents there are five variants to consider. The main route (2 and 2A) offer a lollipop loop in the village. 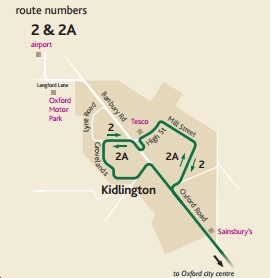 The 2B penetrates a little further north ... 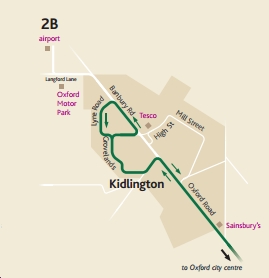 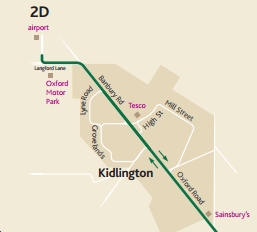 The occasional 2C is a portmanteau version of the 2B and the 2D.
So, after a clutch of concentrated clicks ...

... from the Stagecoach UK-wide web site, you can get a selection of departure lists but no timetables. 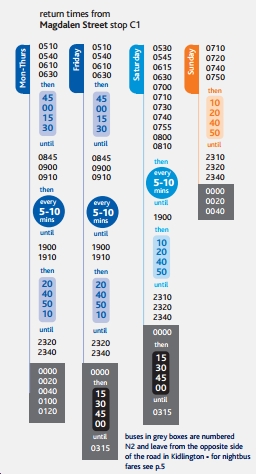 On the other hand, Oxford Bus' timetables are easier to find ...

... quietly ignoring the route variations in the clickable heading. But what you then get is a huge PDF, showing everything on one mega page leading to potential downloading disaster. Have fun looking up a detailed journey on your Smartphone!

Neither operator makes it clear that this is a joint service.
Or you can go to Traveline and trawl tediously through a list ... 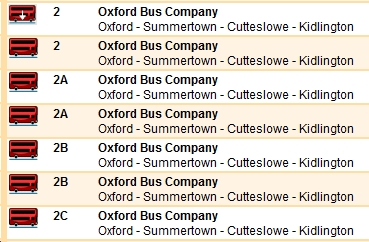 ... because nobody has told "the lads", isolated from reality deep in the Traveline hardened bunker, that it's a joint service. And, guess what, clicking on any of the 11 services listed above takes the enquirer to the to same comprehensive but incomprehensible timetable ...

... with buses run by OX and SOX (and possibly BOX and COX?).
What Auntie Flo really needs is a printed timetable for each separate service and a simplified summary for the frequent buses from Kidlington Centre to Oxford. Then even she can find out when the next bus leaves for her trip for tea with Mrs Jones. [It's the 2B, by the way.]
In the unlikely event of her ever coping with the internet or a smart phone, (she's only just grasped the "new money"), she could also access Oxontime, on the go ...

... and reap the stunning benefits of knowing exactly when her service 2, 2A, 2B, 2C or 2D will arrive in real time, (as opposed to the artificial stuff we all had to put up with before modern technology came along). 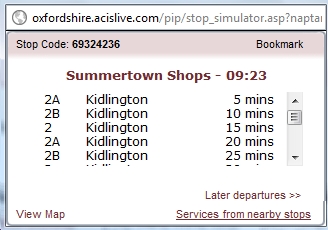 Wow! The inspectors who regulate the service must be doing an amazing job to keep the buses flowing at a precise 5 minute frequency. Stunning!  Have you ever enjoyed the traffic along the Banbury Road?
Real time? Not on your proverbial nelly!
There is a point to all this. 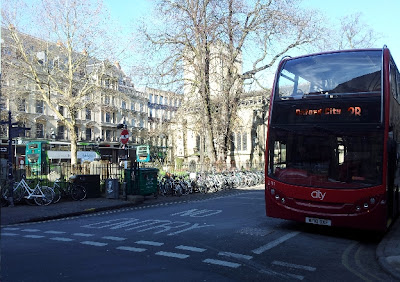 Citybus waiting, Stagecoach departing far left.
Photos by our raving reporter (actually No. 1 son
on his way to an important meeting at Oxford University)
In a recent blog, the much respected Busing opined thus:-
Operators have slowly woken up to the fact that the internet is now the most important source of their product information. But when they did, developments have been quick. In recent years, operators’ web pages have become much richer and more inviting.
Read the full blog (here).
Two questions.
Will "senior" Auntie Flo, representative of the largest single group of non-commuter bus users, ever espouse this "most important source" of bus information?
And, in the unlikely event that she ever does, will she then be able to find out what she wants to know as opposed to what the technologists graciously decide to tell her?

Tomorrow. A last, lingering look a Newbury and the stability of its main bus services. Or not.


Next Blog : due Friday March 9th