Maybe it should be simply "LN"

It was exactly 40 years ago TODAY (published on 13th March 2012) that the first Leyland National was delivered to the neighbouring Cumberland Motor Services depot from the factory at Lillyhall near Workington ... 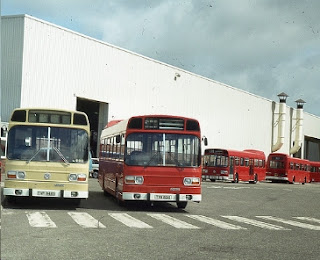 ... which was specially built to delver Britian's new and revolutionary standard bus. And this ... 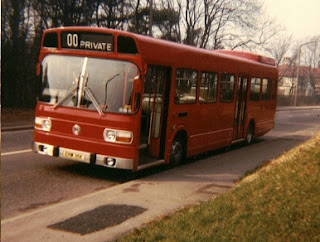 ... is the very first Leyland National "in service" on March 16th 1972; but on driver training duties not "in passenger service". fbb has, as yet, found no record of its first revenue earning run! Opinions on these buses are sharply divided so fbb has asked his chum (and blog reader) Alan to contribute.

Alan is an former engineer, so many of his comments are a bit techncal; fbb will attempt to adumbrate and anotate (for which, apparently, medication is now available!) with a few piccies.
"I first came across the Leyland national when London Transport had six on trial at Dalston garage to compare with six Metro Scania single decks. 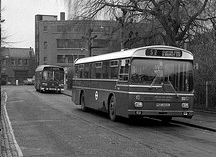 "I was then a Graduate Trainee and did not have any direct involvement.
"However the trial proved the National to be a sound vehicle and 51 were ordered in 1975 to be allocated to Hounslow Garage. 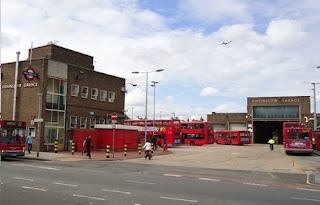 Hounslow Garage many years after LN "heaven".
"These were of the much improved phase II specification. I was the garage engineer at Hounslow, but transferred to Southall just as the Nationals were being delivered. However I was still in the same Engineering Area so was able to see first hand how this new bus performed.
"My view was that its major strength (for London) was that for the first time LT engineers were not allowed to tinker with the specification and had to accept a 'standard' bus. This however was also its downfall as the old school engineers found every possible excuse to find fault. 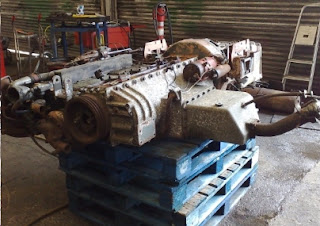 500 series engine, displayed as fitted lying flat
"Its major weakness was the fixed head Leyland 500 series engine, especially after an overhaul. It was noisy, thirsty, and not too reliable. Its fixed head design solved one problem (no head gaskets to replace) but posed problems when it came to major repair. The engine was primarily designed for compactness in vertical form for trucks and did not seem to take well to running on its side: it was not that good in the trucks either!
"However there were some excellent features with the bus as a whole. The drive train was robust, brakes seemed to last for ever, and air suspension was virtually maintenance free. 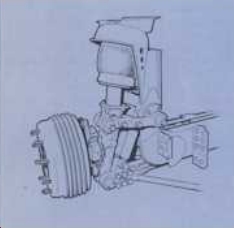 bags of air, not metal springs
"All the fears of rusting never materialised as the rust protection turned out to be amazing. Yes, the stressed panels on the outside, secured from the inside ... 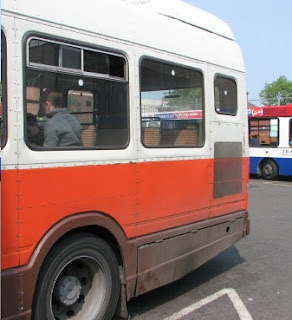 those distinctive rivets were riveted
from the INSIDE. Not the easiest job!
... may have caused extra downtime, but not as bad as the doubters protested. This method of construction made for an extremely strong structure and allowed the factory to be manned with unskilled operatives. 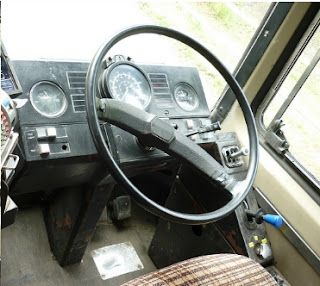 minimalist for 2012 but "top drawer" for 1972
"From a driving point of view I thought it was a revelation with a superb driving position; but some complained it was too car like! Good performance; too good as it led to high fuel consumption and numerous accidents. The rack and pinion steering was in a different league from the older power assisted systems.
"After the older AEC single decks it was refreshing to have a bus that did not boil one day and be turned in for no heaters the next! 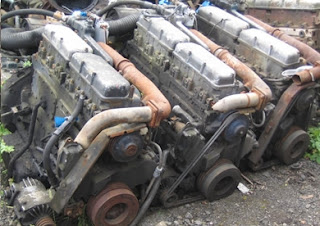 3 reclaimed 680 engines for sale ; removable heads
"The National 2 with its 680/L11 engine addressed the engine problems and the TL11 versions with the retarder (slowed the engine rather than the wheels - fbb) equipped hydracylic gearbox ... 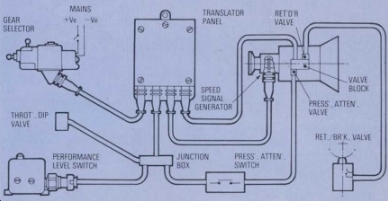 the "hydra" bit means that oil rather than air
was used to control the epicyclic gearbox.
Somebody might understand this diagram!
... improved the already excellent brake shoe life. The few Gardner equipped buses also fully addressed the poor fuel consumption. Typically just as it becomes a sorted and reliable bus it's replaced.
"When at Solent Blue line in the late 80's I tried to obtain second hand National 2's, but all the then operators were holding on to them! 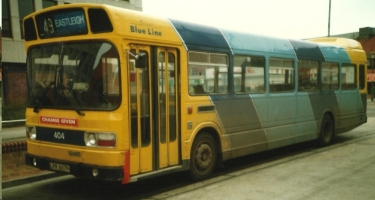 one of "Alan's" Leyland Nationals at Solent Blue Line
"I had to settle for National 1's which were chosen as the Bristol VR's weak transmissions were proving very unreliable in urban use.
"I still consider the National was well ahead of its time and, compared with the old AEC Swift (called Merlin by London Transport who always had to be different!) and Bristol RE, was a significant leap forward in both engineering and operating performance."


Next Blog : due Wednsday March 14th