The times shown are correct, RC169 assures us. But look at the journey "duration" column. Even with new-style maths teaching RC169 and fbb cannot audit these figures. Surely fine Swiss engineering hasn't failed? Perhaps the gnomes at the Zurich computer centre are having an off-day? For those whose maths is a bit dodgy, the actual journey durations are, from top to bottom, 24 mins, 36 mins, 24 mins and 27 mins. Maybe someone "out there" can explain?


Back to Pont Hafren

Before the Second Bridge ... But, therein lies a significant misconception. The boat service did not actually link England with Wales; it linked England with England. The Eastern terminal is at the village of Aust in Gloucestershire ... 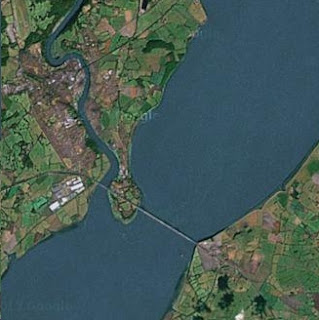 ... just a few hundred yard south of the pier of the 1966 bridge. The boats then crossed to Beachley, also in Gloucestershire and just north of the western bridge pier. The River Wye, marking the national border, snakes northward with welsh Chepstow to the west. Indeed fbb's invaluable friend and "confidant", the famous P. Dantik, is firmly of the opinion that the 1966 bridge, legally, also links England with England, then continues as a "Wye" bridge into Wales. Mind you, you can't get on or off it on the English west bank!

The terminal at Aust has slowly decayed into the ever-welcoming arms of the River Severn ... 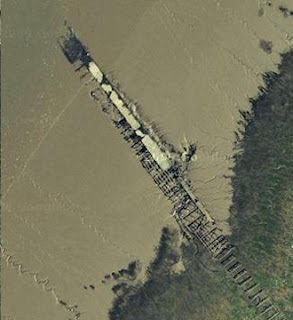 ... but it was once a little more secure! 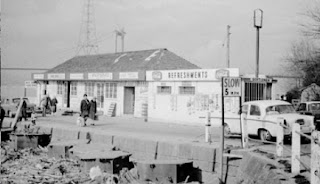 This picture of the queue at the Beachley side shows that the link was well used; helping drivers between Wales and south and west England to avoid a lengthy detour via Gloucester. 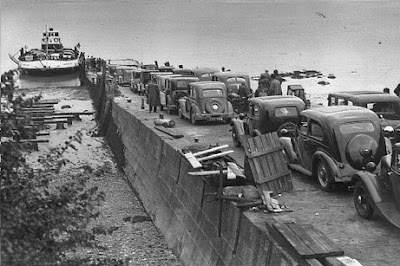 Note the excellent non-provision for "Health and Safety"; you were actually allowed to fall off (or even drive off!!) the slipway unprotected by huge barriers or warned by death-threatening signs. How we all long for a rturn to those un-healthy and dangerous days!

Most of the substantial slipway remains just beyond the Ferry Inn. 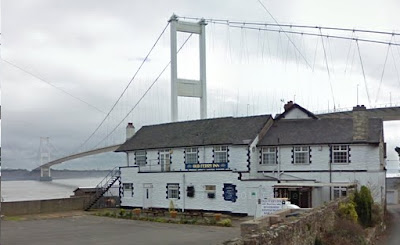 The video clips below show something of the remains and the delights of the crossing; which it has to be said, could be very rough and unpleasant.

Report from 1844:-
On Tuesday last about half past two in the afternoon the passage boat "Dispatch" whilst beating across from the Bristol to the Monmouthshire side of the Severn, having on board five persons, about mid-way was gallantly breasting the waves, when she encountered a squall, so resistless as to sink her. The catastrophe was the event of moments, and was distinctly seen by persons in the Passage House.

This clip from a BBC site shows a journey past Tintern Abbey and something of the ferry at Beachley in 1963. (view here)

This video shows the Aust (eastern) terminal then and now (view here). 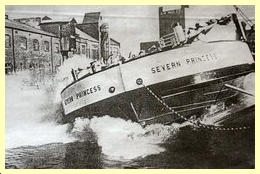 ... has been rescued from Ireland and returned home to Chepstow. 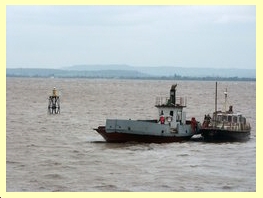 It is not clear, however, whether full restoration is possible. 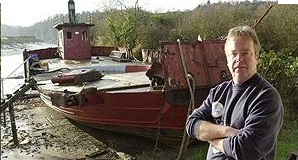 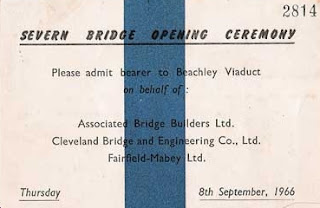 ... the new (the second!) Severn Bridge was opened by H M The Queen. 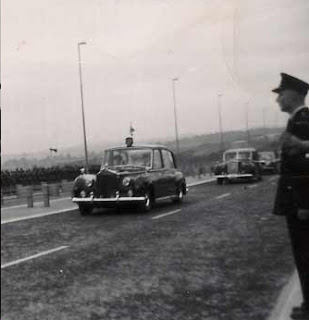 Queueing for the ferries and summer travel delays were consigned to history; but not for long; a mere thirty years later, a third Severn Bridge (called SSC, Second Severn Crossing**) was soon needed; but that's another story.

Finally, enjoy views from the top of the Aust tower, celebrating the 40th Anniversary of the true second Bridge. (view here)

Tomorrow, however, we begin our review of bus services on and near the Severn Bridge.

**AGH in Welsh, Ail Groesfan Hafren [for non-welsh speakers, note that the word for "crossing" is "croesfan", plural "croesfannau", which suffers from the dreaded consonant change to make "groesfan".]