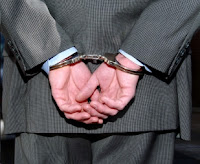 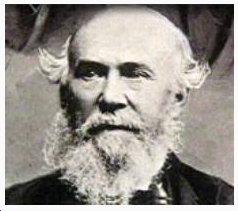 Thomas Bouch was born in Thursby, near Carlisle, Cumberland, England and lived in Edinburgh. He helped develop the caisson (a technique used to build bridge piers) and popularised the use of lattice girders in railway bridges as here at Belah viaduct in Cumbria. 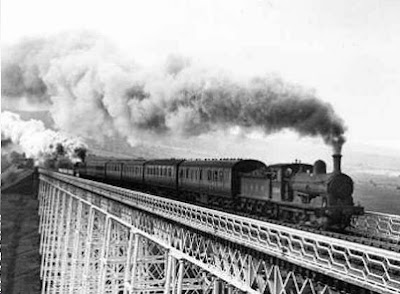 He was knighted after the successful completion of the first Tay Railway Bridge but his name is chiefly remembered for the subsequent Tay Bridge Disaster, in which 75 people are believed to have died as a result of defects in design, construction and maintenance, for all of which Bouch was held responsible. He died within 18 months of being knighted, with his reputation destroyed. 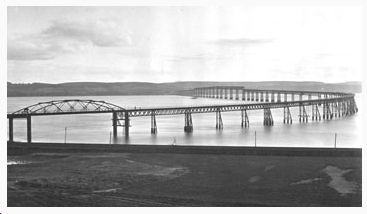 The first Tay Bridge looked spindly but was universally acclaimed as wonder of railway engineering; lauded by none other than Scotland's worst poet, William McGonagall. 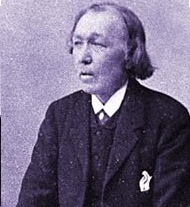 Beautiful Railway Bridge of the Silvery Tay!
And prosperity to Provost Cox, who has given
Thirty thousand pounds and upwards away
In helping to erect the Bridge of the Tay,
Most handsome to be seen,
Near by Dundee and the Magdalen Green.

Beautiful Railway Bridge of the Silvery Tay!
And prosperity to Messrs Bouch and Grothe**,
The famous engineers of the present day,
Who have succeeded in erecting the Railway
Bridge of the Silvery Tay,
Which stands unequalled to be seen
Near by Dundee and the Magdalen Green**.
The tragic collapse of the bridge occurred on 28th December 1879 in a storm with gale force winds and McGonagall's call to the Almighty clearly went unheeded. 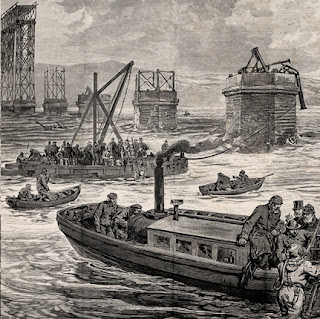 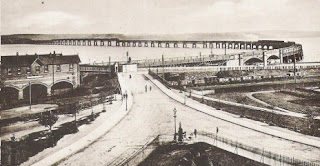 ... which stands firm today, some 125 years later. The arches to the left of the picture above are still in place but the appurtenances of Tay Bridge Station that they supported have recently been demolished. 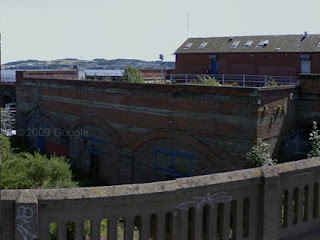 Neverthless the "new" bridge stands proud and firm, carrying far heavier trains than its designers could have ever imagined. 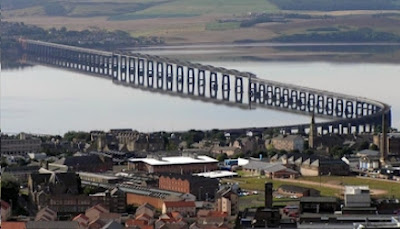 Beautiful new railway bridge of the Silvery Tay,
With your strong brick piers and buttresses in so grand array,
And your thirteen central girders, which seem to my eye
Strong enough all windy storms to defy.
And as I gaze upon thee my heart feels gay,
Because thou are the greatest railway bridge of the present day,
And can be seen for miles away
From North, South, East or West of the Tay
On a beautiful and clear sunshiny day,
And ought to make the hearts of the “Mars” boys** feel gay,
Because thine equal nowhere can be seen,
Only near by Dundee and the bonnie Magdalen Green.
.
Beautiful new railway bridge of the Silvery Tay,
With thy beautiful side-screens along your railway,
Which will be a great protection on a windy day,
So as the railway carriages won’t be blown away,
And ought to cheer the hearts of the passengers night and day
As they are conveyed along thy beautiful railway,
And towering above the Silvery Tay,
Spanning the beautiful river shore to shore
Upwards of two miles and more,
Which is most beautiful to be seen
Near by Dundee and the bonnie Magdalen Green,

.
To find out how Northern engineer Bouch gets linked, however circuitously, with Bembridge on the Isle of Wight, we need  to turn our inquisitive gaze to train ferries.
.
** Notes:-
Mr A Grothe was the engineer in charge of the actual construction contract of the first Bridge.
Mars Boys : HMS Mars was a former navy ship moored off Dundee. It was "home" to deprived and destitute boys who went there to be trained for a trade in a disciplined environment. 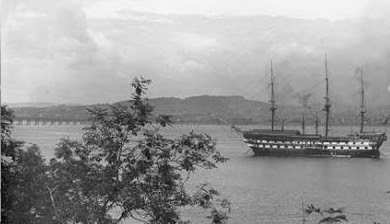 Magdalen Green is an open area of parkland near the northern end of the Bridge. 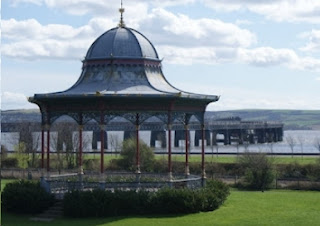 
Next Blog : due Friday March 30th