The Sorry Saga of Phil McCafferty [2]


The story so far, briefly.

Phil McCafferty, good friend of fbb, is on the verge of being arrested for the heinous crime of (allegedly) travelling in a First Class carriage with a Second Class ticket. His offer to pay a "Weekend First" upgrade (which he has paid happily on previous occasions) has been refused; his offer to move to "Standard Class" accommodation has been refused. He has been told he may either pay a penalty charge of £20, leave the train at the next stop and/or face "handcuffs and a night in custody". A revenue protection officer, the train guard and a civil-force police constable are in attendance and a Transport Police officer has been summoned. And this is not Soviet Russia!
And Phil's Standard Class ticket is fully valid for the journey.
The drama is taking place on a lightly loaded Saturday early afternoon train from London Victoria to Portsmouth Harbour. See "The Sorry Saga of Phil McCafferty [1]" (read again).


Phil is, of course, in the wrong - but with good and justifiable reasons. 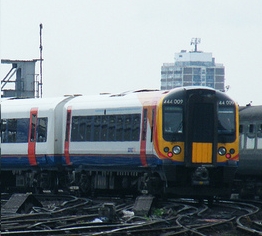 His previous Weekend First upgrade has been paid on South West Trains [SWT] ... 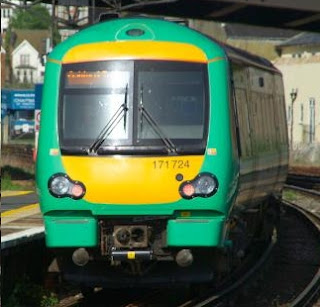 ... but this critical journey is on Southern Railway, and they do NOT have a Weekend First offer, despite the fact that tickets between London and Portsmouth are interavailable on both services. Same ticket, same fare but different terms and conditions. Indeed, Phil has actually paid more than he need have done because "Southern-only" fares are cheaper than those for Southwest Trains.
Why should Phil be expected to know about different conditions?

"Together we are part of National Rail"

But "Southern" staff obviously don't know what is going on elsewhere. If they did, this whole horrid saga might have been nipped in the bus before it escalated to a farce.
"When you buy a ticket to travel on the railway network you enter into an agreement with the Train Companies. That agreement gives you the right to make the journey, or journeys, between the stations or within the zones shown on the ticket you have bought. These National Rail Conditions of Carriage are also part of that agreement and they apply to all domestic (non-international) journeys by scheduled passenger train services of the Train Companies on the railway network of Great Britain. These National Rail Conditions of Carriage set out your rights and any restrictions of those rights. The Train Companies may give you more extensive rights than those set out here; they may not give you less unless, in the case of some types of reduced and discounted fare tickets, a Condition specifically allows for this. The National Rail Conditions of Carriage therefore set out the minimum level of service you are entitled to expect."

In summary, you, the customer, have rights; but the Train Companies can take them away from you whenever they choose. Outside of legal circles, these conditions are pretty-well meaningless as well as being hidden away in the small print. We all tick the box, agreeing to accept these "conditions", but who ever reads them? Or understands them? Are they readily available, on request, at your local station? Try asking!

Certainly the full "Terms and Conditions" are not obviously available on the Southern Railway web site, although you might be choose to read Southern's summary version before deciding to complete an on-line ticket buying transaction.

Now we are all going to do that, aren't we?

But many fbb blog readers are made of sterner stuff, so they may enjoy the full 30 page version in downloadable PDF glory here. 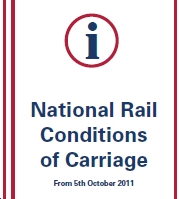 Apparently we agree to ALL of this every time we buy a ticket. Oh yes, really?

To add to the overall confusion, Southern states clearly in their summary conditions that you may upgrade to First Class!

So the tale continues in Phil's own words, edited slightly by fbb to save space.

The revenue officer then demanded to see my driving licence, which, I believe, he has no right to do. The Police Officer suggested that I should comply, which I did under protest. The revenue officer also asked me where I was born (!) and used blasphemous and excitable language. This whole process caused the train to be held at a East Croydon station for nearly 15 minutes with consequent delays to other passengers, some of whom would have been travelling to Gatwick for onward connections.
.
Phil also reported that the guard announced to the whole train that there would be a delay because a passenger was refusing to leave and it would be his fault if they missed their plane.
.
[fbb comment : and what about the delay to dozens of other trains?]
.
At the advice of the off-duty civil police officer the Southern staff backed down and allowed me to continue the journey, having filled in the relevant incident documentation. I was given no copy of any Penalty Notice, merely a small slip allowing me to continue my journey in exchange for my (valid) ticket which your staff confiscated.

The Police Officer decided to contact his superiors who advised him (correctly) that this was not a Police matter and he left the train.

Many passengers then were verbally abusive to me for delaying them. 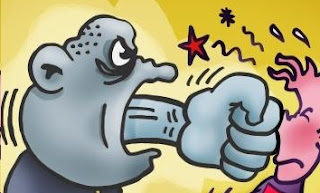 Subsequently, and by post, Phil received a "Notice of Intention to Prosecute", with no opportunity, as in road traffic penalty notices, to reconsider and pay up. He would not have done so, anyway.

To complete Phil's wonderful (and full-fare) travelling experience, he reports

After all this hassle, the train was cancelled at Hove, due to a problem on the line. After half an hour's delay we were told to walk about 15 minutes to the sea front (some passengers were physically unable to manage this) where a route 700 service bus, not even a special replacement coach, ... 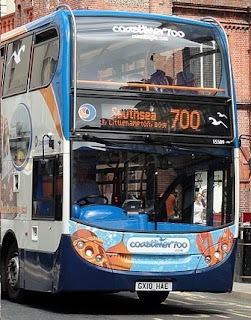 ... would convey us to Littlehampton for an onward train to Portsmouth. Some passengers were actually charged a fare for the bus ride!! Total journey time was 6 hours and 25 minutes instead of 2 hours. No compensation claim forms were offered at any point in the greatly delayed journey.

At least one rail company has an official policy for its guards to "walk away" if a situation arises (e.g. fares) where no immediate harm or distress is likely to be caused to other passengers. Taking the troublesome traveller's name and address and dealing with the matter by post makes good sense, especially if the "client" is only too willing to provide that information, as in this case. It is very likely that Phil was in a stroppy mood (he often is) so further provocation was, predictably, counter-productive.

A seasonal message from Southern Railway.

Make a Mistake and We'll Handcuff You
Copies of these blogs will be sent to owners GoAhead, subsidiary Southern Railway and selected trade magazines. fbb will be pleased to publish their comments when (and if!) received.

"Phil McCafferty" is a pseudonym.