... reporting from the front line.

Our ace war correspondent, Dee Akati, has just filed this report by satellite.  We apologise for any poor quality in the transmission.   She is embedded in a building near a secret bus shelter somewhere in the Dearne Valley, rumoured to be near M*lt*n H*gh Str**t ... 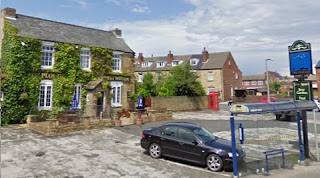 ... from where she sends this update.
"First South Yorkshire's long overdue response to repeated incursions into their territory by Stagecoach was launched on May 9th with a major attack in the Dearne Valley (read again) and a somewhat smaller onslaught in Doncaster. (Additional information here - read again).
"Stagecoach's response has been somewhat muted so far; consisting of a matching reduction in fares on competing parts of their network. Their response propaganda, reportedly dropped by helicopter throughout the region, is surprisingly low-key. 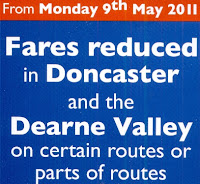 "In the Dearne Valley, Stagecoach are matching First's Duck Day at £3 ... 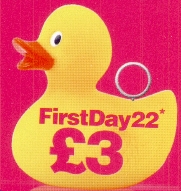 ... but only over common sections of the route.  So a bit confusing for Generalissimo Souter's front-line troops and supporters alike. 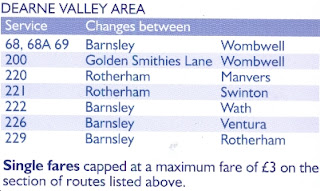 "Meanwhile in Doncaster, the offer is slightly advantageous. Stagecoach's new single fare is also £1 but they offer a day return at £1.70; again only in areas where First has started competing. 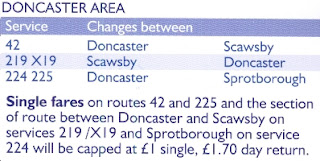 "First are promising to keep their low fare until at least November ... 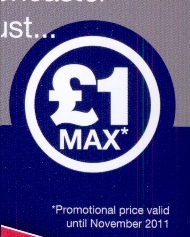 ... and, presumably to placate the bulk of their traditional Donny supporters, there is a £3 day rover for the main urban area and a magnificent half price deal for a week's travel.

""But this latter super-bargain lasts only until the end of May.

"Risking a certain amount of personal danger from sniper attacks, I have just been able to obtain some of First's dynamic propoganda for the 22 and, whatever side of this conflict you may support, the leaflets are certainly striking and quite unlike anything we are used to in this field of battle.

"The Doncaster battle-lines are further enlivened by a couple of high-quality maps, far better than those concocted by Travel South Yorkshire back in the beleaguered capital city.

"An anonymous, but high-up, source within the First command structure assures me that things are going much better than expected.   But he would say that, wouldn't he?  And, as usual, I must stress that such reports cannot be independently verified.

"The next service 22 is due past my hideout, so, in the interests of my own protection, I must bring this dispatch to an end.

"This is Dee Akati returning you to the fbb blog production suite."  (actually a three-piece suite in fbb's living room.)

fbb has received copies of literature, by homing pigeon, from both sides in this conflict and a challenging question arises.  Has Stagecoach got "a man on the inside" at First's heavily defended command citadel in Rotherham?   Has this seventh columnist doctored First's otherwise excellent publicity?  The leaflet does say ...

And thank you "Atlantean" from the "South Yorkshire Transport" forum for this pic of a 22 loading at Wath. Where are the yellow ducks?

Next blog : due Thursday May 19th
Posted by fatbusbloke at 03:12