Steamed up on the Street

Where in the UK could you share the road with a steam hauled train?
Until the 60s, at Weymouth, where a line ran through the streets to Weymouth Harbour taking freight and passengers to and from the Channel Island shipping services. 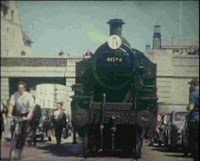 Goods trains ceased in 1972 but passenger boat train services continued to proceed, diesel hauled, at a walking pace until 1987. Note the two railway employees in front of the train below. 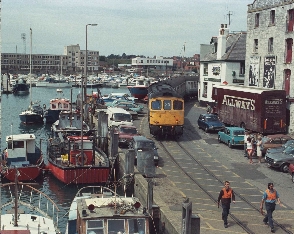 The very last train to traverse the "Tramway" was an enthusiasts' special in 1999.   Despite a local campaign to rejuvenate the branch to take visitors to watch Olympic sailing events, the line is unlikely to re-open.
The Mumbles Railway (Swansea, South Wales) was steam hauled until 1929 when double deck "trains" took over.  They were really trams, but the the line always called itself a railway until it closed in 1960. The pic below is form a commemorative centenary run in 1954 showing all three means of traction used on the line. 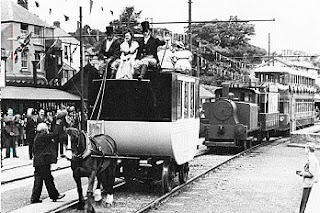 Going back a little further in history, steam hauled good trains still ran on the Wisbech and Upwell line (on the borders of Cambridgeshire and Norfolk) until 1966, but passenger trains last ran in 1927! 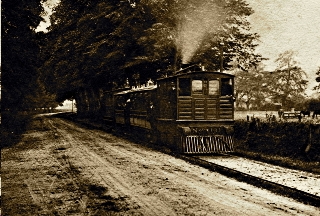 It was in 1945 that steam hauled freight trains ceased to link Wantage Road Station on the main GWR line with Wantage town. 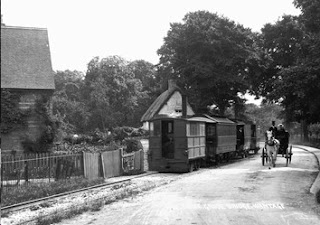 Passenger services ceased in 1925 as a result of competition by the faster (and more comfortable) GWR bus service.   So that's it.  The demise of steam and the proliferation of elf'n'safety silliness mean that we are unilkely ever to see chuffer-trains intermingled with cars, bikes and people.
But, hold fast, ferro-equinological fanatic!    Hie thee to Porthmadog in Wales, HQ of the Festiniog Railway. 2011 marks the completion of the Welsh Highland Railway running 25 miles from Caernarfon, via Beddgelert to Porthmadog. 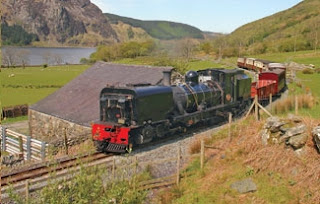 Trains are hauled by massive Beyer Garrett locos, mainly re-imported from South Africa.   This year's timetable includes trains through the streets of Porthmadog to the original Festiniog Railway terminus. Well, to be totally accurate, along about 50 yards of street with the traffic held up by flashing lights; a sort of stretched out level crossing BUT the train does run ALONG the street not just across it.

Here the line, under construction, is seen entering the station.

fbb is about to have a short holiday in North Wales and, whilst Mrs fbb enjoys the luxurious shopping experience in Caernarfon and Porthmadog (?), fbb will be travelling the full length of the line. Apparently an essential purchase to be made by Mrs fbb is a tub of soothing cream for application to fbb's ample posterior after two and a half hours on a hard wooden bench seat. Ouch!

P.S. The Wisbech and Upwell "tram" locomotives are the inspiration for Toby the Tram Engine, who operates, as children of all ages know, on the Island of Sodor, courtesy of the late and Reverend Wilbert Awdry.

P.P.S.  Since the obliteration of the area by a Sainsbury's store, the only substantial remnant of the Wantage Tramway is the company's rather opulently designed former offices in Mill Street.

The blog above was pre-recorded. Yesterday, fbb took the trip from Caernarfon to Porthmadog. The weather was typically Welsh, namely cold teeming rain and swirling mist. But a stalwart fbb remained resolutely (and dripping) as the only passenger in the open sided coach in order to enjoy the view.

the foothills of Snowdon, 5th May 2011, 1545 approx
A fantastic ride, although the on-street bit was, indeed, disappointingly short.   And Mrs fbb forgot to buy the ointment!

next blog : due on Saturday May 7th
Posted by fatbusbloke at 06:43