fbb's plan, whilst on a motoring holiday in North Wales, based at Caernarfon, was to have at least one day without the responsibility of aiming his little tin box at wiggly roads.  A tour by public transport was scheduled for Saturday May 7th.

If, as Leslie Crowther used to say, the price is right, then this looked like a good deal.  The proposed schedule was a circular; Caernarfon, Bangor, Llandudno Junction, Betws-y-Coed, Blaenau Ffestiniog, Porthmadog and thus back to Caernarfon.  And the price did look right.

But how many zones?   And what were the zones?   The Gwynedd printed bus timetable, summer 2111 edition, offered no further guidance.  The Conwy (winter 2010-2011) book offered nothing of help. Perhaps the train operator web site might help?   Of course, fbb's incomparable expertise (?) told him to look at Arriva Trains Wales.  It is doubtful whether a more "normal" enquirer would be knowledgeable enough to make this leap of intellect without expert assistance.
But Arriva Trains Wales did offer a map of zones ... 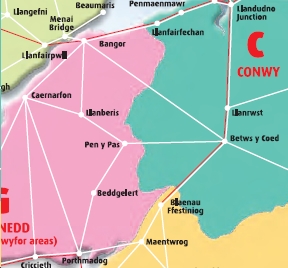 which implied that the round trip would involve three zones, coloured pink, blue and buff on the map.    It did seem a bit mean that the last few yards between Betwys-y-Coed and Blaenau Ffestiniog would up the price from £7 to £12; an expensive few yards!   But that's the trouble with zones, they always create anomalies.
But wait; Arriva also offered a downloadable leaflet.   [fbb only found this after making the trip, as it was so easy to find - NOT!]   There was the same map and the same prices. 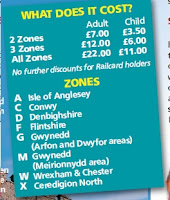 ... looked something like that planned by fbb.  Back down to TWO zones, despite the map; or was it?  It did not include Blaenau Ffestiniog. The other news was that Arriva Trains Wales was quoting higher prices throughout, elsewhere on the web.

In the end fbb decided to gamble that, whatever maps and leaflets might say, his party was unlikely to be expelled from the train in the middle of  Blaenau Tunnel 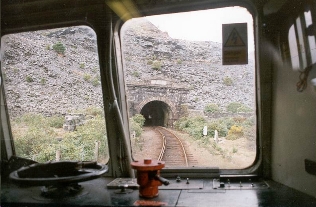 Blaenau Tunnel, 2 miles 338 yards
or thrown off the bus at the top of Bwlch y Gorddinan (Crimea Pass) 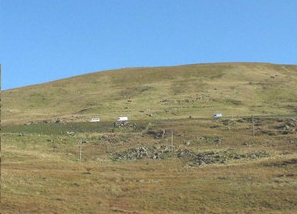 as they approached Blaenau Ffestiniog.
So fbb and party paid a nice Arriva bus driver £8 each as the fare has recently gone up, apparently with no publicity.  Pity Gwynedd's timetable and Arriva's train leaflet had not been corrected.   Said driver had to pull into a layby to "interrogate" his ticket machine, now about as complicated as a Kray computer, to find which buttons to press.
The trip went extremely well (of which more later) and no-one queried the 2 zone ticket.  We may never know what is correct!
A couple of P.S. snippets:-
The single train fare from Bangor to Blaenau Ffestiniog (without old fogey discount) is ...

... whereas the North Wales Rover price which includes that £12.60 rail journey and loadsa buses is, you remember, £8 (probably). Certainly the rail ticket sales web sites would charge you £12.60. What would you have to pay at the Bangor ticket office?   What would the conductor-guard charge you on the train?  Yet another example of JPS** rail fares!
Although a bus service operates, fbb's party planned to use the Festiniog Railway between Blaenau Festiniog and Porthmadog.   This would be at "normal" fares, fbb assumed.   Undaunted he enquired if there was a "North Wales Rover" discount. Yippee, the nice lady in the hut on the platform chopped a further 10% of his old fogey discounted fare.  fbb was well pleased until he found the Arriva Trains North Wales Rover leaflet after the trip. 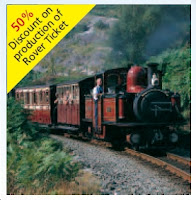 The picture is, of course, of a Festiniog Railway train.  Now that would have been even better!   But it wasn't offered.   Why?   Dunno!
We don't make it easy, again and again, do we?
**JPS = Just Plain Stupid.  Those who feel the need to add a modicum of asperity to this acronym may do so in the privacy of their own boudoir!
next blog : due on Thursday May 12th
Posted by fatbusbloke at 04:31