Now why shouldn't you find it, via the comforting contribution that we come to expect from Travel South Yorkshire?   It all depends on whether you mean Norfolk Park OR Norfolk Park! 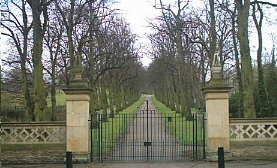 Norfolk Park [Park] was a corner of the Deer Park that came with the transfer of Sheffield Manor to the Duke of Norfolk in the 17th Century. The ornamental area was given to the City by the 14th Duke in 1848 and the remains of the deer park were leased for 999 years by Sheffield in 1953.   The Park [Park] fell into decline in the 1990s but has been subject to renovation projects in recent years and is now known as Norfolk Heritage Park.
In the early 60s the decision was taken to use much of the 1953 land to develop a new housing estate called, confusingly, Norfolk Park. The estate consisted of a ribbon of tower blocks, with associated low rise maisonettes, spread out along a much extended Park Grange Road. The bus service was No 71, a huge circular incorporating the tram replacement Elm Tree via Prince of Wales Road route. 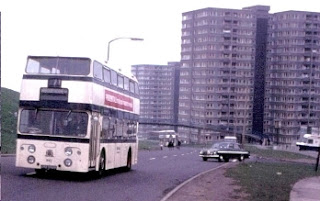 For the Sheffield Transport "anoraks", the first bus route up Park Grange Road was started on 9th November 1964 for building workers and numbered 122.  It became a "proper" daily service (also 122) on 4th July 1965 before being linked with the 71 at Manor Top on 23rd October 1966.  A youthful fbb travelled on the first "normal" 122 and subsequently on the last 122.  The same driver and conductor worked both trips!

Roll on roughly forty years and the tower blocks are progressively demolished, the last falling in 2005 ... 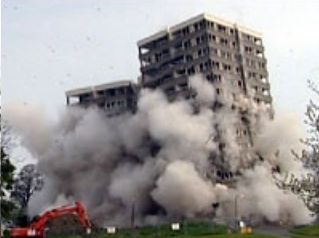 ... and somebody has built a tramway!   This view is from similar spot to the service 71 pic above! 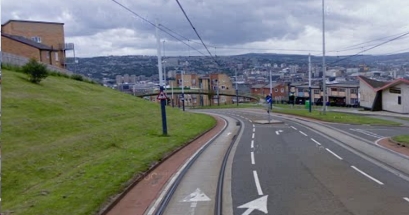 The last vestige of the every 6 minutes service 71 bus is the hourly service 7 which continues via much of the traditional route via Prince of Wales Road, but now terminates at Meadowhall.

So best to travel to Norfolk Park [Estate] by tram.

Unless, of course, you are Travel South Yorkshire.   Their bus station departure boards** would direct you, perhaps, to service 41 ...

... which would get you to one of the Norfolk Park [Park] entrances, but would be useless for all but the very edge of a tiny part of the estate.    Silly!    Or, you could go for the service 48 ...

... which goes nowhere near EITHER Norfolk Park!  You might be lucky and find a service 7 ...

... which does go to Norfolk Park [Estate], but don't bother looking for Norfolk Park on the bus station screens that display "destinations", because, the chances are, you will be given the wrong information!

But it's on the computer, so it must be right!

Now here's a challenge; Mr TSY manager, try catching a 48 and getting off near any address on Park Grange Road.  fbb will send you a big slice of balm-cake if you succeed.

An extract from the great fbb map (view here) explains all. 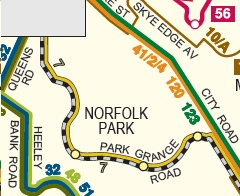 Snippet 1.  You may think the 48 route looks pretty close to Norfolk Park.  Horizontally it might be, but only the brave would scramble through the deliberately dense woodland and up the hill on the left, as here! 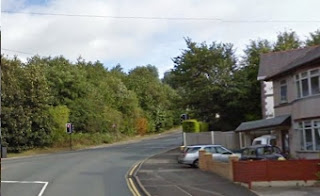 Snippet 2.   Googlemaps thinks Norfolk Park Estate is in Norton, only about 3 miles away ...

What a splendid resource we have in the internet! But it's on the computer, so it must be right! Oh, it's  "East Road", presumably abbreviated automatically to save bits and bytes but to add mystique and confusion.

** Instead of actual departure boards, which would be diffucult to photograph as they are positioned high up, these are printouts from the on-line versions.

Next blog : due Thursday May 26th
Posted by fatbusbloke at 06:11