fbb has been looking at the publicity posters that adorn stops at Stevenage bus station; see part one (read again). 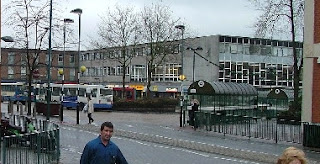 Your rotund reporter has already commented on mixed-up times and over-complicated stop descriptions; especially the unnecessary repeating of district names. Of course, we all know why this is so, don't we?


We don't?   Then fbb will tell us.   It is all because of the NAPTAN codes, The National Public Transport Access Nodes; which, being interpreted, means a big list of 300,000 bus stops.   The poster gives us the number of the stop we are gazing upon:-

If you download and print a NAPTAN description for one bus stop it runs into several PAGES of A4 text! EVERY stop needs to have a "town" name, a "district" name, a "street" name (or equivalent) plus its code and an eight figure grid reference.   There's lots more "useful" information, like name of the man who paints the pole; breed of dog that most makes use of "the facility" etc. etc.   It's all pertinent!

So these over-engineered names get sucked in and spat out in all their "glory"; complication breeds confusion.
Then there's this tiny extract from Hertfordshire's list of departure times:-

The 1633 service 80 conveys its crowd of passengers for just two stops to ASDA and South Hertfordshire College.  Note "H" tells is that it only runs on schooldays, note "G" that it only runs on non-schooldays.  The difference between the two journeys.  None at all!  Does anyone join the bus at Stevenage?   Or is it only used by passengers travelling through from afar?
Then note "G" on SB15 means, as for the 80, "runs on non schooldays" but it takes a "1" AND and "E" to tell us that the other SB15 only runs to Corey's Mill Lister Hospital (at Corey's Mill?) on schooldays.

One note for one SB15 Journey (e.g. on schooldays only runs as far as the hospital) and NO notes for one 80 journey are all that is needed. But the computer insists on unnecessary information overkill, yet again.
And, of course, we have to be given a lengthy diatribe about how to get "next bus" information on our mobile phones.

It only costs about 5 shillings a call (25p) and mostly tells you what the poster on the stop says anyway.   Nationally its use is negligible and it's certainly not worth the cost of providing the service.  Close it down.
Why can't we have timetables at bus stops?
The answer usually given is that 60% of people cannot read a bus timetable.  Maybe if we provided them we could improve on that percentage. BUT, fbb suggests, more that 60% of "normal" bus passengers can't (or won't) use a computer or mobile phone or even land-line phone to access their bus times. But we still persist in advising them to do so.
The real reason is that it is all too easy to "push a little button" (cue for a REALLY annoying little song! watch here!), print a poster and forget that real people might want something better.   Real people certainly want some thing less confusing.
Just as an experiment, fbb has created a revised poster (see the existing Hertfordshire version : click here):- 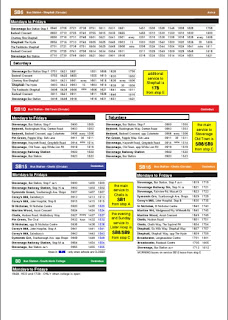 and see a full sized version of fbb's creation; actually a "paste-up" of Hertfordshire's published timetable pages with pretty headings (click here).   It uses the same print size and coveys ALL the information on the original PLUS full timetables for all the services. AND there's still extra space for some general publicity. Because it has been created by a "real person" it eliminates unnecessary computer-speak and is able to add useful extra guidance ... 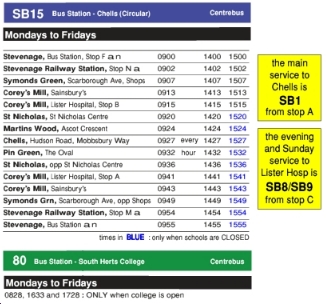 ...like telling potentially confused passengers where other useful bus routes might be found.   This more "subjective" information is totally beyond the blind electronic mind.   Particularly perceptive people will perceive that fbb has also tinkered with the headings; firstly removing some of the reminders that we are in Stevenage; then, more technically, changing the service 80 heading from an irrelevant "Hitchin - Stevenage" to a somewhat more informative "Bus Station - South Herts College". 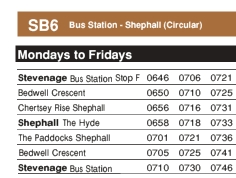 ... simplification without any real loss of clarity; surely the aim of any quality information provider.

And one final niggle.   Recent re-numberings have re-created the SB (Stevenage Bus / Super Bus) network. But, mysteriously, service 10 from Stevenage Stevenage bus station to Stevenage Old Town (in Stevenage) is still just plain "10".   Maybe some SB forgot to change it!

So fbb has done so, for the purposes of his demo poster.

The whole problem, in Hertfordshire as elsewhere, is a reliance on mindless technological gubbins with an over-engineered comprehensive database to the detriment of information that is both useful and comprehensible to the "average" passenger.

But then, Public Transport would be much easier to manage if it weren't for the perennial problem of pesky passengers.