A bit more about some recent blogs.


Blow and Bother Because Blogger has been Broken : the service was restored at about 1745 on Friday 13th May.  Blupdates [issue 4] has been republished retrospectively for Thursday 12th.  The blog for Friday 13th seems to have been lost in the ether (note the date!!!).  fbb is recreating it and it will be published later on Friday 13th - there will be no new blog on Saturday 14th.
Aaaah! The Good Old Days. (read again)
Our Northampton correspondent sends more about bus enquiries in Wellingborough.   Once upon a time, United Counties (and its successor, Stagecoach) had a lovely little enquiry office at the corner of Market Street and Sheep Street.  The building is still there but you won't be able to "nail down" any timetable information! [feeble fbb joke] 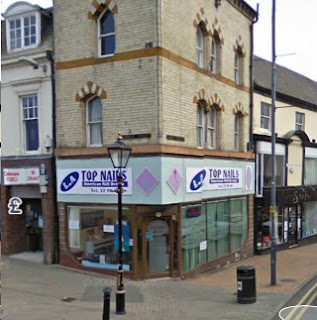 This facility was replaced by a manned enquiry desk on the ground floor of Wellingborough Library, 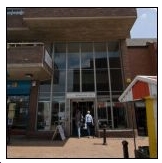 jointly supported by the county council and Stagecoach.  Recently, this has been abandoned and replaced with a rack of ... 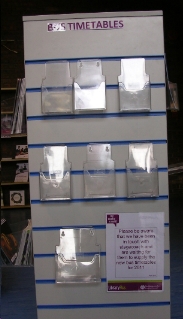 ... nothing, lovingly embellished with a notice blaming it all on Stagecoach!

Nothing is said, of course, about the sinful shortage of supply from other operators.   And not a Cumberland sausage about the relatively significant changes to the network that started on 8th / 9th May!

Meanwhile, in a Galaxy far far away, well in Milton Keynes actually, information supply gets a partial boost. You've heard of the Gherkin, The Shard and the Louvre's Pyramide; now we proudly present the Milton Keynes Cube! 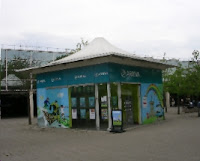 This is Arriva's brand spanking new enquiry office.   Is this anything to do with a recent high-powered survey which showed that MK residents would use public transport more if they knew where the buses ran? Anyway, it's open six days a week and is packed with information.   London Midland Trains, London Sightseeing (wonder who runs those?) and National Express feature as well as local MK services.

But of course, no mention of Grant Palmer, Z & S etc., companies that operate evening and Sunday versions of some of Arriva's routes. There's helpful for you! And of Stagecoach, with their high-profile X4 and X5 coach operated inter-urban routes, not a dicky bird.   More dicky birds below.

Incidentally, the hourly service to Wicken and Deanshanger mentioned enthuiastically in "The Good Old Days" blog is withdrawn without replacement (so far, at least) from 21st May.  Never mind, there's a Wednesday only bus to Northampton and a pleasant mile-and-a-half walk along footpath-less narrow lanes to the nearest alternative. And these villages are only just in Northamptonshire.  So that's all right, then.  Here a picture of the village pound at Wicken, due to be gated and refurbished to accommodate members of the County Council transport committee. 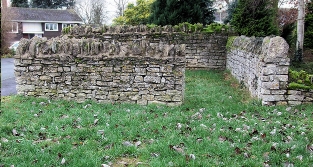 Apparently Phil Deacon is a bit of an artist.  Phil was a fellow pupil at school and fbb last met him in a bank about 40 years ago.  But Colin Merry (also a Northampton Grammar School alumnus, contacted via "fiends disunited") reported this skill to fbb.  So Graham Askew in Northampton obtains a jpeg of Phil Deacon's painting, sends it across the ether to Colin Merrey in Australia who, in turns sends it to fbb back in dear old Blighty. 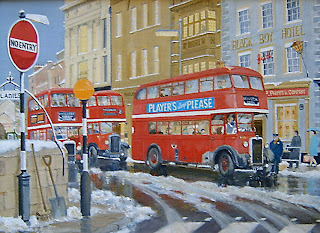 It's set on Wood Hill, Northampton town centre and features buses of fbb's teenage years.  It also shows the underground ladies' convenience into which a 12 year old fbb rushed, in error, for an emergency personal needs break!  A red-faced boy beat a hasty retreat when he realised his error and, even now, always checks sex before a visit.  Very freudian.

And another home-town snippet.  Readers will remember that Northamptonshire announced that it was withdrawing all local bus subsidy from May 2011.  There would be some replacements, consisting of new, innovative and cheaper public transport initiatives.   Thus it was that the subsidised bus service via Overstone, Sywell and Mears Ashby would be completely withdrawn.   We now have the new, innovative and cheaper replacement ... 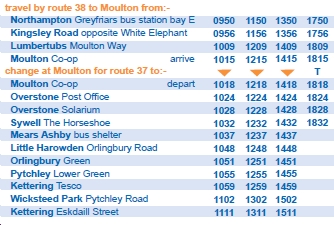 ... a subsidised bus service via Overstone, Sywell and Mears Ashby (!!) with far fewer journeys; so at least they got the "cheaper" bit right. What fertile imagination our political masters must have!

First Bus in fight-back mode against a Stagecoach onslaught in South Yorkshire has launched, on May 8th, the new service 22 with some dramatic publicity.   For those less than enthusiastic about a visit to the local Bingo Hall, the number 22 is embellished with the phrase "two little ducks".

So, from a rejuvenated First, we have ...

... plus a particularly attractive fares promotion ...

... and, for an introductory period only, an on-line duck-shooting game! 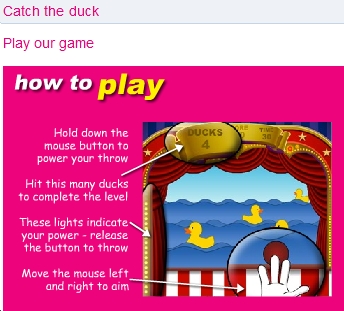 Coming soon, two fat ladies for the 88, Kelly's eye for the number one, Doctor's orders for service 9 and clickety click for the 66.  Perhaps not?  If you want to play the "22" game, go to First's web site and follow the "catch the duck" link.

The new competitive services to Scawsby and Sprotbrough are also being "promoted" ...

... with keenly priced fares and a Firstbus designer leaflet. 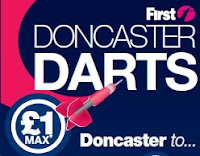 It's certainly not like the First Bus we are all used to.  Goody, goody!

And a final family fancy!   Easter saw a visit from No 1 son-and-heir, lovely daughter-in-law and 2 x grandsons. This gave fbb a chance to model his Christmas present from aforesaid grandsons.   And here it is:- 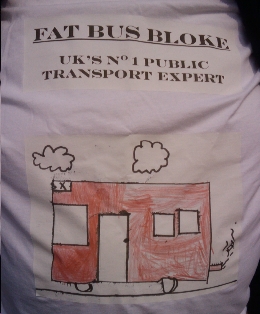 The bus might not pass the emissions test, though!  Barry Doe may well challenge the lettering; (and quite rightly too; Barry is the über geek of public transport) but the thought from the family was really delightful. Thanks to you all.

next blog : due on Saturday May 14th
Posted by fatbusbloke at 17:53