That's the Wonder of Woolwich 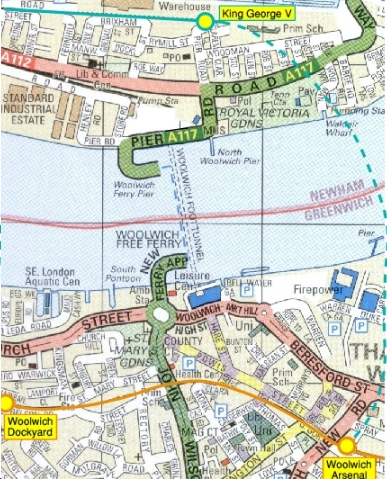 A big map, but a lot to take in.   Docklands Railway is the blue line via King George V station, curving in tunnel to its terminus at Woolwich Arsenal.   Proper big trains follow the orange line from central London; with "stoppers" calling at both stations and so-called "fast" trains serving Woolwich Arsenal only.

"Old" Woolwich was the High Street, near the middle of the map and beside the river, but the modern town centre now stretches along Powis Street to the main (Arsenal) Station.
So how does the Transport for London Traveline journey planner guide you across the river to North Woolwich?   It depends where you start from ... 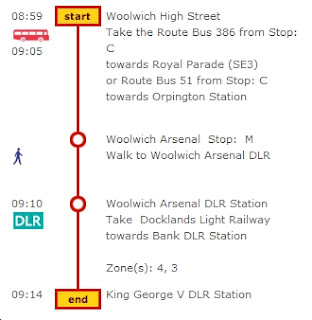 Alternatively, if you were "in the know", you could reject the official advice and take the FREE ferry - and it's free for vehicles as well - for FREE.  [The clue is in the name.]   The service began in 1888 and its present cost, borne by Transport for London, is about £7 million a year.  As fbb knows to his painful cost, there are no toilets on the boats!   1 million vehicles and 2.5 million passengers are carried each year with a boat every 10 minutes at peak periods.
But if you are aquaphobic, there is yet another way. 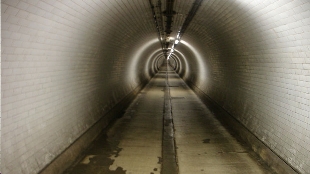 The foot tunnel was opened in 1912 and is accessed at each end by stairs and lifts, the latter operating daytime only.  The entrance buildings are similar to the Greenwich foot tunnel, situated a little nearer the centre of the metropolis, surprisingly, at Greenwich.

The Woolwich tunnel is also FREE.  Finding the entrance at the South end can be a bit tricky as it hides shyly behind the Waterfront Leisure Centre. 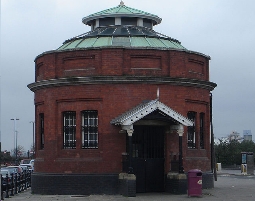 Or at least, there was a tunnel.   It appears that the foot tunnel is "temporarily" closed to rectify defects in the staircases and the tunnel itself.  "Hey, have you heard, there's a leak in the Woolwich Tunnel?" 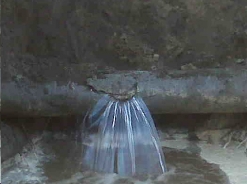 "Yes; it fell out of my granny's shopping basket!"   [leak, leek : geddit?]   And talking of "you know what", the tunnel is fitted with a "leaky feeder" system.  (?)   Apparently it allows you to use your mobile phone.

Now the key question is this.  Why does the TFL journey planner advise you to spend £6.20 (or even £2.60) rather than going for a freebie?   The system knows about the ferry ... 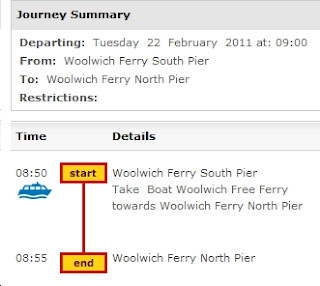 ... but seems unwilling to find it as part of a through journey.   Perhaps TFL are tying to recoup some of their £7 million a year?   Or perhaps the people who build the technology don't know what goes on at Woolwich. The TFL "spider" map for Woolwich labels the ferry, but the tunnel remains anonymous - maybe because it is closed; or perhaps because ... no idea?

To add to the confusion, the London Bus map (South East) shows the ferry but does not even mention the tunnel! 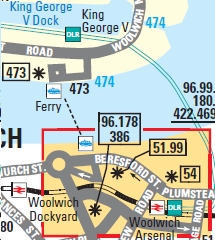 While our reader ponders this one, enjoy a piccy of the older ferries (replaced in 1963). Bet they had toilets on them! 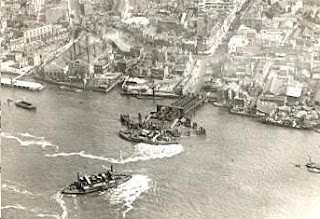 P.S. As you might expect, keen reader, xephos finds the ferry and thus gives you the slower FREE option. Also, please note, the foot tunnel is likely to be open again by the time this "pre-recorded" blog appears.

next blog : due on Tuesday May 3rd
Posted by fatbusbloke at 03:46