From Snowdon to the Channel Tunnel?

A link via Public Transport?


But not a link BY public Transport; fbb has not been escaping from the delights of North Wales.  The link is more obscure, but a link it is!
There are many paths which lead keen walkers to the summit of Snowdon, (fbb prefers the train!), one of which starts near the tiny village of Bethania on the road from Beddgelert to Betwys-y-Coed. 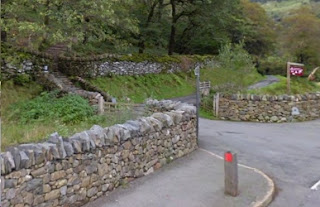 It is a route partly walked by Willam Ewart Gladstone at the age of 83 on September 13th 1892; an event commemorated by the inscriptions below on what is now known as the "Gladstone Rock". 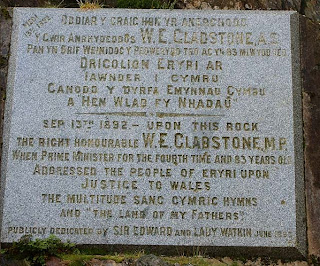 click to view a larger image
This particular Snowdon path was created by a Mr Edward William Watkin  (he who dedicated the plaque above).   He had a summer residence nearby and the path, popular with braver and more energetic walkers, still bears his name today. 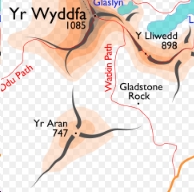 Not all his projects came to a successful fruition, however.  One of the lesser known wonders associated with London's expanding Metropolitan lines was to have been at Wembley Park.  Watkin's idea was to create a huge "pleasure park" near the village of Wembley. Visitors would, naturally, flock to enjoy this pleasurable paradise using Mr Watkin's trains. The centrepiece was to be a tower, even bigger than that created by Monsieur Gustave Eiffel in Paris.  The first section of Watkin's Tower opened in 1896, complete with restaurant and dance hall. 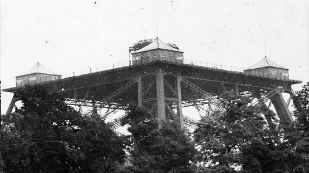 Sadly the project suffered from the inevitable financial problems, exacerbated by changes in the tower's design and subsidence!  It never got beyond the first stage and was closed in 1901 and demolished in 1904.  Eventually Wembley Stadium was built on the same site.
And the link to the channel tunnel?   It was Watkin who proposed to extend his high-speed Great Central route via a tunnel under London and a bigger tunnel under The Channel to serve destinations in Europe.  110 years later his plans are (unwittingly) resurrected as the proposed High Speed 2 rail link. Ironically the "new" route follows Watkin's plans exactly, in concept if not in detail! 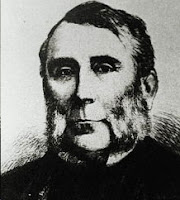 fbb salutes the last of the railway visionaries; AND the instigator of a footpath up Snowdon!

next blog : due on Wednesday May 11th
Posted by fatbusbloke at 06:12