Or, What colour is a "Pink" branded bus route?

Our visit is to St Albans, historic cathedral city, 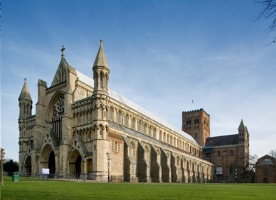 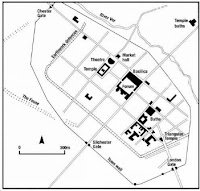 click on the map to show a legible version
and home to a network of local bus routes run by Uno**, formerly Universitybus, a company owned by Herfordshire University.   Back in the 90s, most buses in the area were run by Sovereign, 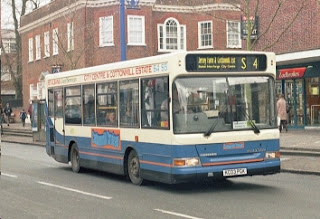 successors to London Country and later sold on to Arriva; below a preserved  bus giving something of the traditional "green bus" atmosphere of the "good old days". 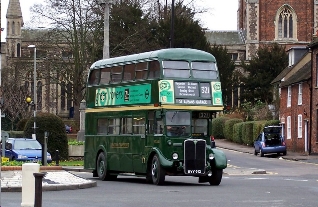 Local buses call at St Peters Street in the City centre and mostly serve the main "City" railway station a little over half a mile away.   On March 27th 2011 the local bus network was relaunched as "Pink" but still retaining the S1 (etc.) route numbers.

The Uno web site shows an excellent route map of the "Pink" network which fbb has adjusted into a bloggable form. 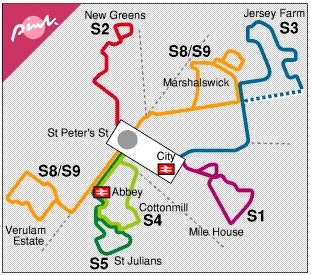 So our "brand awareness" question, posed above, can now be answered with empirical authority.  In St Albans, at least, a "Pink" route can be red, orange, blue, light green or dark green.   In fact the only colour it cannot be is, you guessed it, pink!
Have we really got his brand "thing" right? 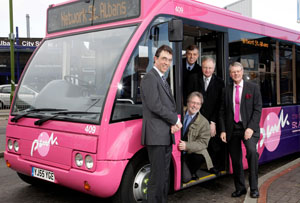 A local press release describes the new scheme as "a ground-breaking new network". To fbb it looks very much like the old network with buses with the "Pink" logo and, ahem, not very pink route branding. Now, in Salisbury, at least the "reds" are all different shades of red! 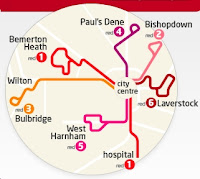 Well, sort of!   And have pity on pretty Tyttenhanger (and it's not made up; it's a "commuter" village to the east of the City):- 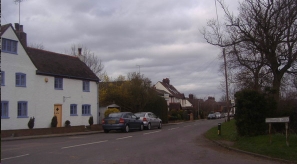 ...  with an "improved" schedule, now a meagre three round trips a day, hidden in the depths of a hugely complicated timetable  for Arriva service 304.

** in the interests of pedantry, the "o" of Uno should have a hoirizontal bar above it; for whatever reason we know not.  Sadly the HTML character set, which allows your author to add accents, umlauts and cedillas, does not include an "o" with a horizontal bar.

Next blog : due Wednesday May 25th
Posted by fatbusbloke at 06:44