The case of the 1715 from Porthmadog


Croeso y Gymru
It all began when fbb arrived in Caernarfon on Wednesday last, 4th May.  Although the Destination with the Dongle (read again) was delivered by motor car, fbb was anxious to take at least one North Walian tour using public transport.  Thus it was that the first call in Caernarfon was to the Tourist Information Centre, right next to the Castle, for a set of timetables. 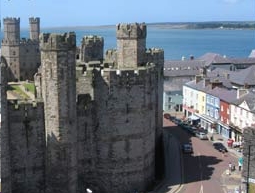 Excellent timetable books for Conwy and Anglesey were on display but, surprisingly, not one for the local Gwynedd area.  fbb asked! "Well," came the hesitant reply, "we have got some but they contain some mistakes.   But we don't know what the mistakes are.  The book is being reprinted in a couple of weeks, so you should be wary of what it says in this one."   Encouraging, eh?

Bounteous blogging about the fbb circuitous circumnavigation of Gwynedd and Conwy will follow "in due course", but this post concerns, yet again, the astounding efficiency of Traveline.
The last leg of the fbb tour was scheduled from Porthmadog at 1715 to Caernarfon (see last column of the possibly erroneous timetable, below.) 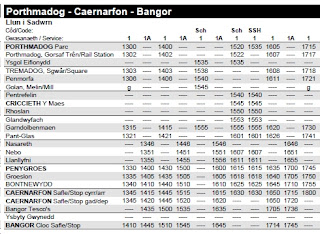 click on the image to enlarge
As fbb's group had a meal booked at 1815 in Caernarfon, this was a critical path.  So, at 1630, fbb cast all care to the wind and rang Traveline, obediently cognisant of the tourist office warning.
"When is the next bus from Porthmadog to Carenarfon?" he asked with just a hint of unease.
"The next bus is at 1805."
"Oh?" queried a crestfallen fbb.  "What has happened to the 1715?"
"It only runs to Garn Dolbenmaen now." came the firm and authoritative reply.  (Garn Dolbenmaen is roughly half way between Porthmadog and Caernarfon.)  Disaster!  Had fbb's punctilious preparation been punctured by poor printed publicity?   Would fbb's travelling companions ever trust him again? 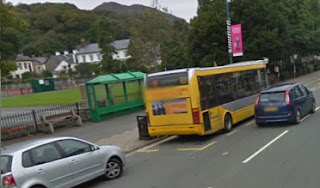 fbb and party happily ignored the hapless Traveline, joined the vehicle and showed their tickets.  As did other intrepid travellers, at least one of whom bought a single to Caernarfon.  So off they set.
And, to everyone's relief, they arrived, on time, as planned, in Caernarfon.
Question 1 : If the Gwynedd timetable book really had errors, could the publishers manage to print a simple list of corrections?  Too much to ask?
Question 2 : How could Traveline, costing millions, get it so ludicrously wrong?  NO buses, at any time, on any day, terminate at Garn Dolbenmaen. (exciting picture of the village bus stop below.) 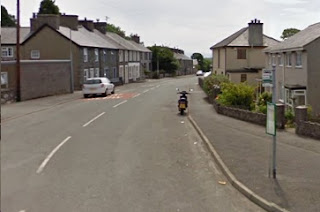 Question 3 : As Traveline is the ONLY telephonic source of Welsh timetable information, who should be sacked for incompetence?   One person who shouldn't be sacked is the very nice Traveline lady who answered the phone.   She was reading out what the sainted computer told her; here the journey from Porthmadog to Garn Dolbenmaen only:-

The rest of the through journey is shown, inexplicably and disjointedly ...

click on the images to enlarge
... in two subsequent columns!   Three non-connecting journeys instead of one.  GIGO (Garbage In, Garbage Out) as they say!

P.S. The booked evening meal was delicious.
next blog : due on Monday May 9th
Posted by fatbusbloke at 07:35