The Riddle of Ravenstone Wood


Sometimes the blogitis disease spreads virulently, almost out of control.   In this case it began with a picture of Stoke Bruern station, without the concluding "e", in a book "Last Days of Steam in Northamptonshire" 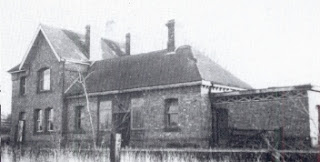 The station, on part of what became the Stratford-upon-Avon and Midland Junction Railway [SMJ], opened in 1892 (the line was completed in 1891).  This and Salcey Forest, the other station east of Towcester, promptly closed to passengers in May 1893.    Poor old Stoke Bruerne, with or without its "e", seems fated to lose public transport services. [See earlier bus based blog (read again).]   The pic above was taken in 1955, just three years after the last goods train trundled through.   fbb wondered whether the buildings still existed and, thanks to a virtual drive c/o Google Streetview ... 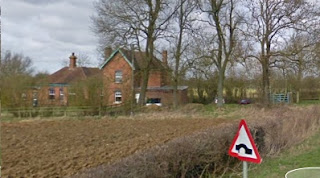 ... confirms that they now form an attractive private dwelling, in use, in good condition 118 years after the last few lonely passengers used the line.  The tracks continued eastwards to join the railway from Northampton to Bedford at the ghostly and isolated Ravenstone Wood Junction. 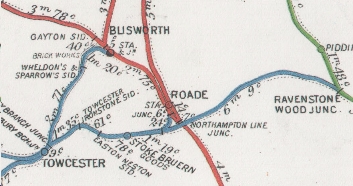 Many, many years ago fbb and his parents were at Horton Gates on the pre-motorway road from Northampton to London and, much to nervous mummy-of-fbb's concern, decided to explore, in their motor car, a "Bridleway to Ravenstone" ... 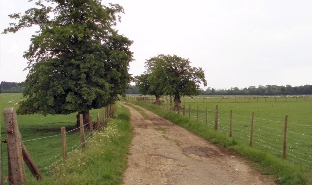 ... which became rougher and rougher and eventually fizzled out at locked gates adjactent to Ravenstone Wood Junction signal box.  A picture from about the same date shows the line to Stoke Bruern(e) and Towcester bearing off left; straight on is the route to Northampton and the locked gates were just past the signal immediately beyond the 'box. 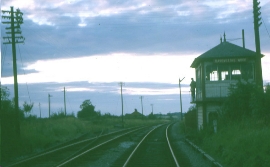 Young fbb visited again a week or so later with a chum on a bike ride and reached the same impasse. Bravely the two intrepid explorers climbed the gates, crossed the lines and entered the dark, dank and dismal wood.  [atmospheric, eh?]

And there, mysteriously, were several massive concrete bunkers, shaped like giant teacups about 20 feet high [3 metres] and protected by high fences with the late 1950s equivalent of razor wire.   The boys left in a hurry!  The Riddle of Ravenstone Wood, indeed!
Later discussion revealed the local rumours that this was where the government hid and tested bombs.   The rumours were steadily embellished until the lads enjoyed transitory fame at school, having visited an atom bomb store! Sadly a recent aerial view of the area shows no sign of the supposed top secret establishment ... 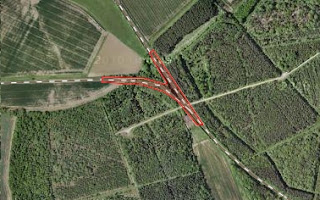 ... but, to the right of the highlighted junction site and across a parallel track, there are signs of more recent tree planting and an overgrown access track.   Everything else, including the former railway, has all-but disappeared. 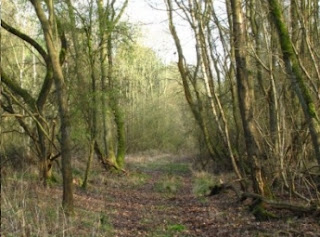 So what was in those concrete bunkers?   What was the solution to the Riddle of  Ravenstone Wood? Maybe fbb will never know. The internet has, so far, brought no investigative joy. Perhaps one of the readers of this blog could tell? But they might have to be executed if they ever did reveal the secret.
Incidentally, some of the pictures used here have been collected by the SMJ Society; whose eclectic aim is to collect and record everything to do with that rather obscure set of long-closed lines.

Their site (see here) has an amazing collection of 1769 photographs; now that is super-keenness for you!

Meanwhile, the pedantically observant amongst our readers will search in vain for Salcey Forest station on the map above.   That is because the map dates from 1913 by which time Salcey Forest station was but a lonely memory; just a hut used by the farmer remained in 1955.   It was located on the blue line just above the first "n" of Ravenstone; and, from a potential passenger point of view, was in the middle of nowhere. 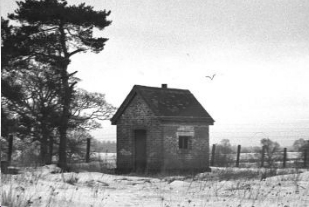 Stoke Bruern survived cartographically because of its goods siding.