"The" Delaine (always "The" in the good old days) ran its first bus in 1919 with services from Bourne to Stamford, Spalding and Grantham. 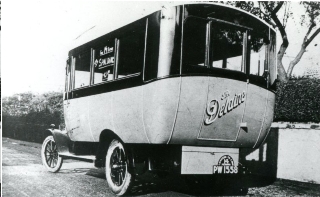 Its first bus was, naturally, number "1" and fleet numbers have continued sequentially ever since.  Fleet number 150, a Volvo B9TL with Wright Gemini 2 bodywork (so says the Delaine website), is due for delivery in Summer 2011.
In 1923 the trunk service between Bourne, The Deepings and Peterborough commenced. 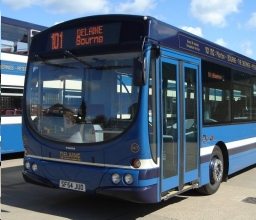 This route still runs, numbered 101 with a 102 variant "round the houses" at Market Deeping, but changes to the timetable on Palm Sunday weekend prompted this fbb blog. 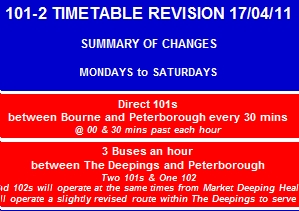 An INCREASED rural bus service when all about are losing their heads, well, their subsidy anyway?   What's going on?   Once upon a time, way back in 1996 and doubtless NBC before that, Viscount (a privatised bit of the National Bus Company) ran an hourly service from Peterborough to the The Deepings.

It's successor, Stagecoach service 22, is similar; but breathed its last on Saturday 16th April.

Now, fbb is not party to the politics of PSV planning in Peterbrough, but this looks very much like a stitch-up, whether official or "co-incidental".   Stageocach stops, Delaine increases frequency.   But it will be very nice indeed to see more of the blue and white where once multicolours ran.
Sadly, Delaine now has a "modern" and decidedly "dumbed down" logo,

but it does have excellent maps ... 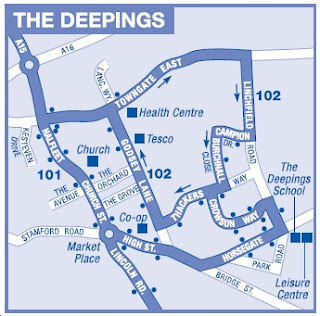 and a useful, if somewhat compressed network diagram.   This shows the Peterborough "end" of the main routes.

The Delaine has always been a family business (The Delaine-Smiths), with offspring joining the company, often as school leavers, and working up from driver to senior management.   October 2010 saw the recruitment of the latest "Delaine", daughter Jennifer; who when interviewed for the local rag, said she was looking forward to passing her PCV test and getting out on the road. 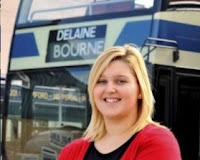 And a final snippet.  Just along the road from the depot in Bourne, there is a little estate of new housing; and the road name?   Delaine Close, of course - a rightful recognition of a family concern committed to providing a quality service for the residents of "their" part of Lincolnshire.   A Bourne supremacy, indeed!

next blog : due on Sunday May 8th
Posted by fatbusbloke at 07:18