American psychologist Walter Pitkin wrote a book of the same title in 1932.


But, first, a  Blupdate to Fridays Post, "Just Holding On" (read again):-
A blog comment reveals a "sort" of gap filler between Olney, Stoke Goldington and Newport Pagnell; Milton Keynes service 37/37A running roughly every TWO hours.  Better than nothing but still not a patch on an hourly through service.  Because it doesn't even get you to Milton Keynes without a change, fbb cannot see the service surviving for long.

And it doesn't come up on Traveline, which is why fbb missed it.  And there's still a gap between Hackleton and Stoke Goldington. Perhaps if MK and Northampton worked together (sounds of councillors gibbering in incoherent fear) we could still have those through journeys?  Gloucester Old Spots in full flight again?

and a couple of extra notes on Blupdates Issue 4 (read again):-

The cube at Milton Keynes was formerly a fast food outlet and is "officially" known as the MKube!
To avoid a war of attrition between grandsons, the back of the T-shirt is adorned by another bus with unacceptable emissions; plus bus stop, shelter and (as is usual in an fbb blog) an inadequate or incomprehensible timetable frame, as seen below.  It is certainly not fbb skulking in the shelter, too thin!  fbb likes the driver's hat, though. 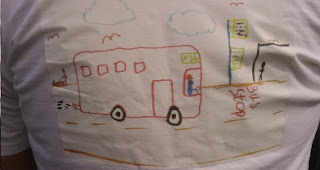 Now that a potential punch-up has been averted, back to today's blog.

Happy Birthday IoW Steam Railway; should have been January, but better late than never.


By 1965, its seemed certain that the two remaining railway lines on the Isle of Wight would be closed.   But the revolutionary idea emerged that at least some of the network could be electrified and operated by old London underground trains.   So it was that in 1966 a new (and old) electric railway was born.   The section via Newport ... 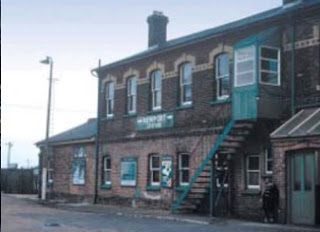 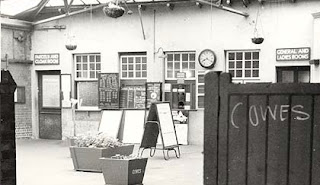 would close completely.   Or would it?   A company called Sadler Vectrail leased a stretch of the Meon Valley railway line (near Portsmouth) and began testing a stylish diesel railcar for eventual use on the Ryde - Newport - Cowes line.

Meanwhile a group of enthusiasts was assembling a rather eclectic mix of stock at Newport Station with a view to operating a heritage steam line ...

Vectrail never materialised as a viable option; so it was that on Sunday 24th January 1971 the first "preserved" train pulled into the minimalist station at Havenstreet.   [Historically, Island Railway companies were always short of money and worked on a "make do and mend" basis.]  Thus the Isle of Wight Steam Railway was born and the infant project began staking a claim at the hitherto very basic Haven Street Station (always TWO words for the station name, by the way!)   Crowds of enthusiasts and supporters rejoiced as the little train chuffed in.

Over the years the site has expanded to match the developing aspirations of the Company... 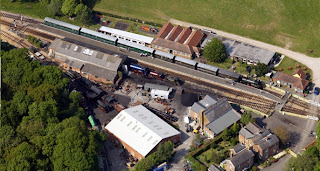 ... which linked to the "main line" at Smallbrook Junction in 1991. Actually, not linked. There is no physical connection between the two lines, but Island line trains stop at the "interchange" on steam railway operating days.   The original Haven Street station building (glimpsed at the right-hand end of the picture, above) is now joined by sheds and workshops, catering suite and offices and a well stocked shop in the old Havenstreet Gasworks. 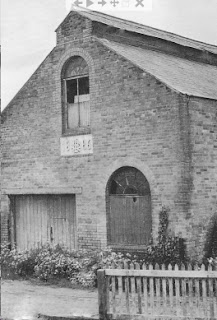 The Company still has aspirations to reach at least the outskirts of Newport, but road and building development precludes an extension through to Cowes.  Nevertheless, the railway is one of the few preserved lines that runs original locomotives and coaches on regular trains.   Not QUITE the good old days as here on Ryde pier ...

...note the paddle steamer, the Ryde Pier tram and the dome of the pier head ballroom - those WERE the days!   The Island's "main line" ex-Underground trains are now approaching their 73rd Birthday, so we have two "heritage" lines for the price  of one.
A few years ago, fbb was invited to address a group of Island Councillors.  One of them suggested a policy of converting the line between Ryde and Cowes into an electric tramway.  fbb was asked if he could suggest a company to provide the investment commercially. Snags - the bus service (now every 10 minutes) is likely to be faster and more frequent; no-one much lives along the line; and there is absolutely no chance of the line making a profit.   It never did as a steam railway before buses were invented!  So another spiffing idea from well-informed politicians.
Stick to the heritage, chaps.   Leave it to the boys who know how to do it!
Belated Happy Birthday IoW Steam Railway and MANY, MANY happy returns!