Nice to be Nice for a Change!


fbb has, previously, expressed enthusiasm for the excellence of at least one bus publicity leaflet (read again) and the same company attracts his eagle eye again.

The May 2011 timetable is, indeed, a fine example to all bus operators.  Initially, please note, it is a timetable book, not a "frequency guide" or a heap of leaflets. The booklet contains a simplified network diagram ... 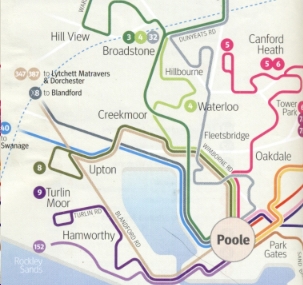 ... a list of services, colour-coded to match timetables and maps ... 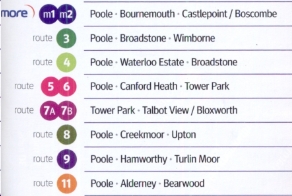 ... and an alphabetical list of destinations.  The inexperienced bus passengers will find it relatively easy to get started with this publication and they may enjoy musing over Bournemouth's local versions of Alderney, St Ives, St Leonards and Redhill. 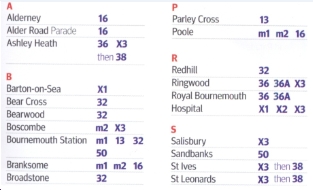 There are some interesting and innovative fares offers ... 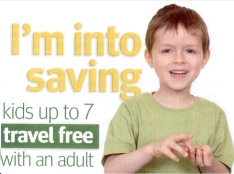 but, sadly as usual, nothing much about simple single fare options for the occasional user.  As is becoming increasingly common, Wilts and Dorset fares are on the high side, but with some very attractive weekly ticket prices, bringing fares down to about £2 a day. 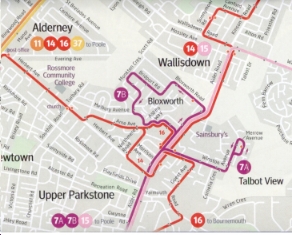 As well as the network map, there is a series of local, more detailed maps showing all stops and even indicating which are "timing points" shown in the individual timetables.  Plenty of "other" road names are included and only routes overlaid on a full street map could better what is provided here.  No doubt the cost of copyright constrains such an aspiration. 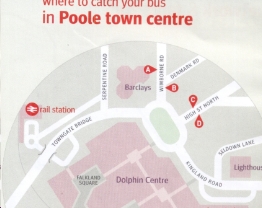 There are helpful enlargements of Bournemouth and Poole centres, thus ensuring that it is easy-peasy to find the right stop.  Some of W&D's seasonal services have different frequencies at certain times of the year; and, instead of an unattractive list of dates, the book includes a coloured calendar.

In this case, lilac, pink and orange link with the appropriate frequency block.  A similar diagram for school term dates even distinguishes between Hampshire and Dorset schedules.  It wouldn't do to work together, would it?
Obviously it would be really, really good if the book also included RATP Yellow Buses as well.  [RATP; the Paris transport operator!] But as some W&D services are in direct competition with the former Bournemouth corporation network, I suppose that would be too much to ask.  Maybe one day the "entente cordiale" will extend to public transport?
There remains one mystery. Look at W&D's quoted phone number.  That number rings in the Southern Vectis offices in Newport, Isle of Wight. Are they the best people to advise on what is happening in Poole? 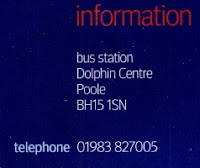 Meanwhile, if you want Southern Vectis information, you DON'T ring the number above; you are guided (oh dear, oh dear) to Traveline. Now that used to be in Pymouth!  And Southern Vectis is part of the same group as W&D.  No, fbb doesn't understand.

We must have a picture of a bus.

Which is a reminder that W&D have quietly dropped their special "more" branding from the Canford Heath services 5 and 6; but kept it for the frequent and prestigious "main line" between Poole, Bournemouth and beyond. 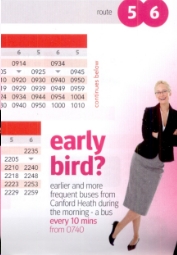 Is this to strengthen the identity of the continuing more1 and more2 routes, or the beginnings of a bye-bye branding volte-face?  We shall see.

If only you could pick up timetable books like this everywhere.  And it's FREE!