fbb has opined often (far too often?) about the poor quality of bus information in Sheffield.   But the root cause of the problem remains the conflict between the supposedly cost cutting and "sustainable" computer driven "stuff" and the obvious (?) benefits of work by potentially expensive "real people".
fbb last visited Stevenage in the mid 60s.  A year or so later, the New Town became a hotbed of omnibological experimentation on the part of London Transport's country bus division. 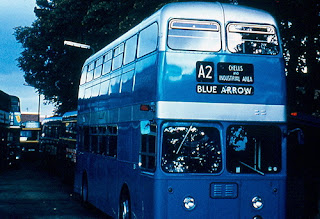 A former school chum lived there and worked for ICL. (International Computers Limited; they were successors to the pioneers of industrial computers, Lyons.  Yes, the Ice Cream and Sausage people made computers - but that's another story.)   Blue Arrow was a dedicated commuter bus service, pre-book only, from Chells to the Indusrial Area.  Chum Mike used it to get to and from work. 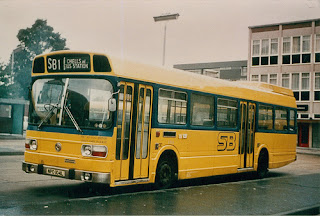 ... a branded network of routes, with very non-standard blue and yellow buses, offering efficient and speedy transport from estate to town, or so the publicity claimed.   They were the first EVER farebox services for LT; no tickets, no change, just drop the cash into the box. The Blue Arrow only lasted until 1971 and SuperBus became Stevenage Bus and ultimately lost its kudos (and its fareboxes). 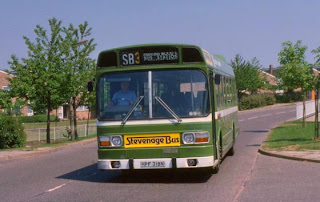 Recently the "SB" Superbus brand has been resurrected,

indeed some services have been renumbered thus as recently as March 2011.
fbb is interested in publicity at Stevenage Bus Station.  The displays in question are too big to examine in a blog, but a large sized version can dowloaded. (click here) 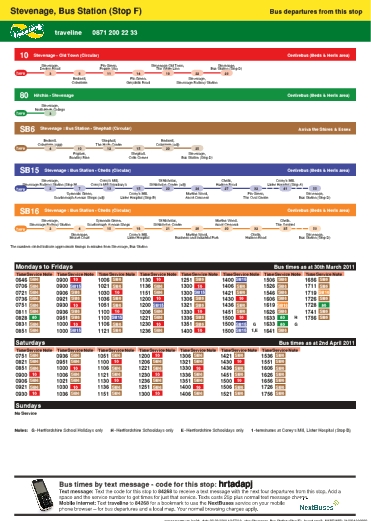 This sort of computer-generated display in various forms is becoming standard all over the country.   Please note that it does NOT give any useful timetable information.   It is simply a list of departures in time order, not even separated out service by service.   At least it's not as bad as South Yorkshire where the Monday to Friday, Saturday and Sunday times are all mixed up.  That is classic! 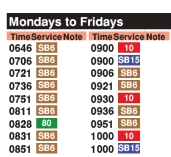 Above this rather confusing list is a set of straight line diagrams of each route, showing "running times" from the bus station. 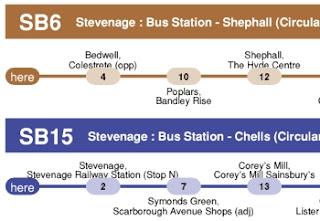 This immediately provokes some questions, then some irritation, then some utter frustration combined with a little apoplectic disbelief.

Are there lots of bus passengers who simply forget where they are and have to be reminded that they are "here" at Stevenage bus station?  They might, of course be at Milton Keynes, or Hertford or Aberdeen or perhaps on the moon.

Just off the timetable extract (above) is Corey's Mill Lister Hospital; presumably this distinguishes it from all the other Lister Hospitals in Stevenage. 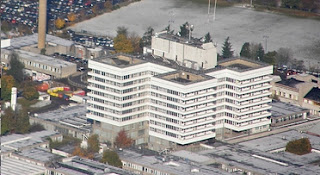 one of the many Lister Hospitals at Stevenage!
Do I really want to know that the SB15 circular service stops "adj" to Scarborough Avenue shops?  There is no other stop at that point, ALL buses to Symonds Green follow the same one-way loop.

And there's more; but that can wait for part two.   Meanwhile, enjoy a "good old days" pic of a gaudy yellow and blue Superbus jostling for space at Stevenage Stevenage bus station bus station with a "proper" distinguished London Country green bus.   Nice! 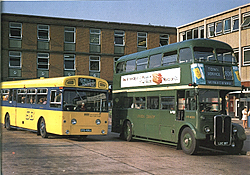 next blog : due  definitely  on Friday May 6th
Posted by fatbusbloke at 05:51