This was on Axe Valley Travel's occasional service 899 between Seaton (Devon) and Axmouth, seen here about to depart from the clock tower on Seaton sea front. 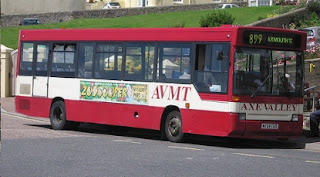 Barry's poser was ... "Is this the shortest bus route in the UK with a running time of just 4 minutes?"
As a spotty child, fbb well remembers a holiday spent in Mrs Heard's bed and breakfast (and evening meal) at Colyton in company with his granny.   It was one of these houses on Station Road. 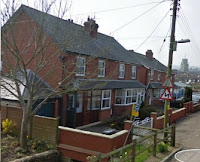 The daily holiday routine was to catch the Southern National single decker from Axminster to Seaton (a route now run by Axe Valley) which then ran via Axmouth and passed the B & B.    fbb liked the Axmouth route because of the "little bus", the stream that ran down the main street of the village, views of the river Axe and the sadly unfulfilled dream of seeing a train on the Seaton branch.  Little fbb was not yet "into" train timetables. 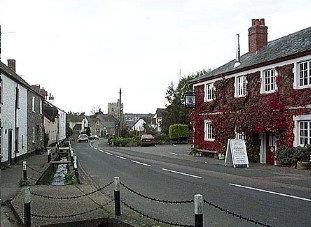 Axe Valley Travel now runs direct into Seaton, once the route of big red double decker Devon General buses from Colyton.
But back to Bazza's question.  fbb remembers a visit (as a student) to Darwen (Lancashire) and while his chums drooled over Albion Freelanders, or some such marque, fbb espied a bus a bit like this ... 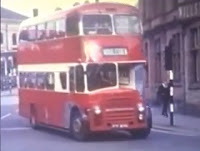 ... which went off up a hill, turned round and came back down.  "That must be one of the shortest bus routes ever," mused the student lad. And promptly forgot about it. But Bazza's query encouraged fbb to return to Darwen local services, now run by a collection of assorted companies running assorted minibi.   Sadly, there was no way of retrospectively identifying the vaguely remembered Darwen Corporation route.
But, lo and behold!   There is, in 2011, a Monday to Friday service HC2 from bus station to Darwen Health Centre. 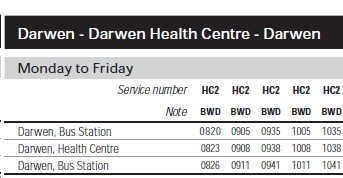 A serendipitous discovery with a running time on this 30 minute frequency route of - THREE MINUTES! 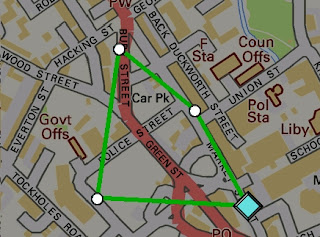 The Health Centre is at the bottom left apex of the triangle on Police Street; Darwen Circus bus station is the blue diamond. Is this the shortest scheduled bus route in the UK?
A little bit of fbb family nostalgia. Having arrived at Seaton, granny would esconce herself in a shelter which used to grace the top of this ramp, with toilets (now closed) helpfully underneath. 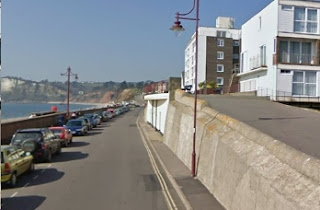 Lunch, fbb remembers fondly, was a small sliced loaf, a packet of butter and slabs of Bourneville chocolate eaten as rather chunky but deliciously unhealthy sandwiches.   And as a special treat, little fbb was given a shilling [5p in the modern stuff] to spend in Woolworths (near the bus shelter below and now a far less enjoyable branch of Carpetright) or to feed into the avaricious slot machines in the arcade opposite (still there 55 years later; with the open doors and the red sign!). 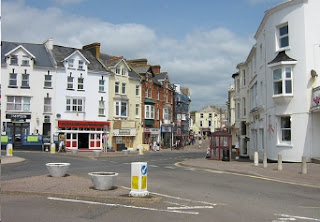 Ah, happy memories.
But is there a shorter bus route than 3 minutes?

P.S. Enjoy this oldish pic of a train leaving Seaton station and trundling past the marshes at Axmouth; never spotted by  fbb-the-kid from the little green bus. 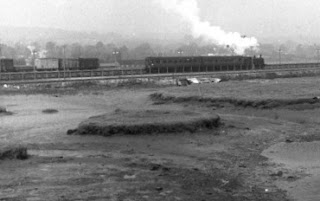