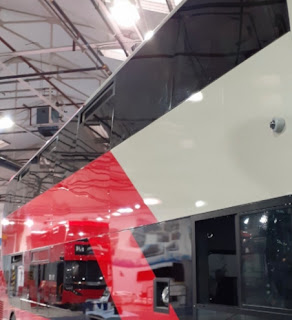 The above snap of a Zap was all that we saw a few weeks ago, but now ...
On the same day that the Witch of Pendle found a new Way to travel from Burnley to Manchester, the Chap who likes to Zap without a map along the gap between York and Leeds has experienced a relaunch.
Not to be outdone by their Lancashire bedfellows, Transdev has introduced its "Sky" class on the fast route that was once part of the Yorkshire Coastliner branded group of services.
Zap also has a star of stage, screen and television (?) to add his dulcet tomes to the on-board announcements. 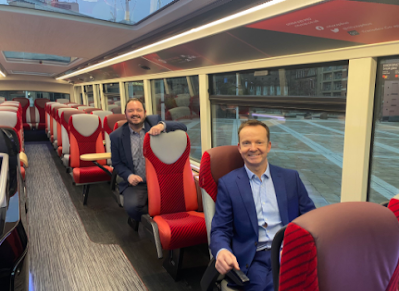 He is none other that BBC North's (the Yorkshire bit) weather man, Paul Husdson, seen above with boss Alex Hornby on the top deck of one of the snazzy zappy new vehicles. The timetable still operates half hourly ... 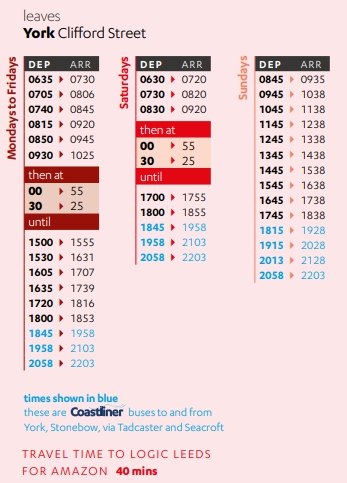 ... and the on-line map shows that there are several extra stops in York. 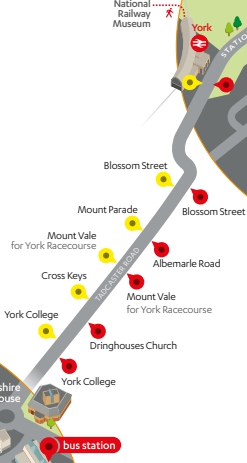 And now there is a new stop, not yet on the zap map, at "Logic Leeds". 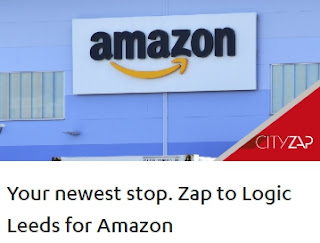 It is some time since fbb was in Leeds, so recourse to a map for following zap will provide a snap of the route. 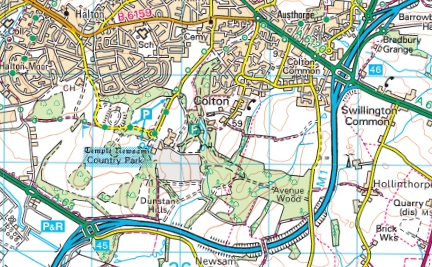 To serve Amazon, Zap will leave the A64 from York at its junction with the M1, follow the M1 past its No 46 junction with the A63 at Swillington Common where the A63 disappears in a puff of exhaust smoke, only to re-appear further down the M1 at junction 45.
This new-ish bit of A63 skirts the Temple Newsam estate ... 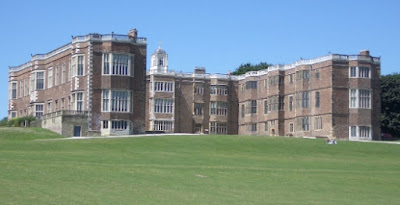 ... and passes south of yet another vast park of large cuboid warehouses, one of which is yet another Amazon distribution hub. 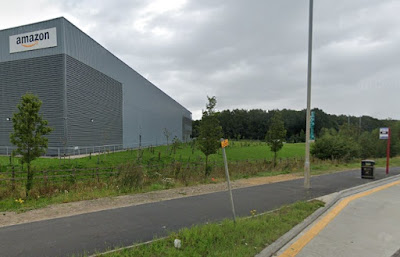 But, to add to the excitement, City Zap also has a video. It is buried deep in their Facebook page and not easily downloadable - well not by fbb anyway.
But you can view it (here)
Mercers Row Misconceptions Reviewed 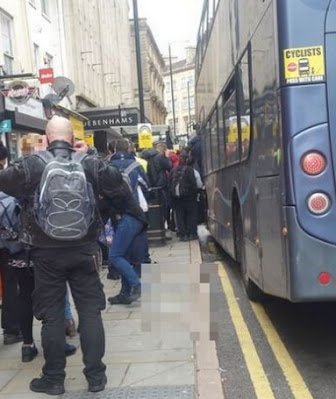 Further to yesterday's blog, fbb has now been told that the stop pictured above (Stop 18 in the non bus station), namely the stop outside Debenhams on the west side of The Drapery in Northampton, is indeed being moved to Mercers Row on the east side. 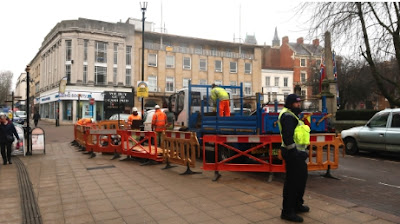 One stop is being replaced by TWO, both called Stop 18. Alan explains.
One morning the Council officials turned up at their Angel Square HQ ... 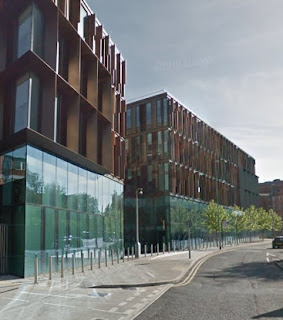 ... to find a big bag of money on the doorstep. An accompanying note explained that it was from Santa Rishi and elf Grant Shapps. The money was to be spent to encourage the population to walk and cycle, not to buy a chocolate orange for each councillor. So they had a think and came up with some ideas including the proposal to make Billing Road from Park Avenue South to the hospital one way with a contra flow cycle lane.
This cunning plan, running all the way along Billing Road past fbb's educational Alma Mater ... 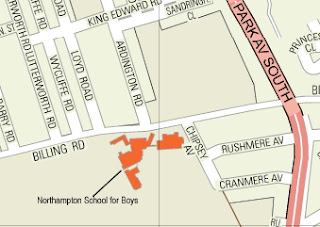 ... and down to Northampton General (where his ex utero life began), was very controversial. 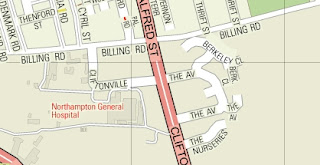 The utterly crackpot scheme, which would have disrupted buses and all other traffic over a wide area east of the town centre, was rightly laughed out of court.
Also from the febrile mind of officialdom came the less controversial Mercers Row scheme. Four bus routes will leave from the new Stand(s) 18. Alan continues:-
Only about eight more working days to go to erect the shelters, stop flags and  barriers in Mercer's Row; and train the persons with hard hats, hi-vis vests and clipboards who will teach the unruly Amazonians and Clipperati how to queue politely. (I may have made that last bit up)
Amazon again?
Anecdotal (and photographic) evidence suggests that shift-time Amazon buses to Swan Valley south west of the town ... 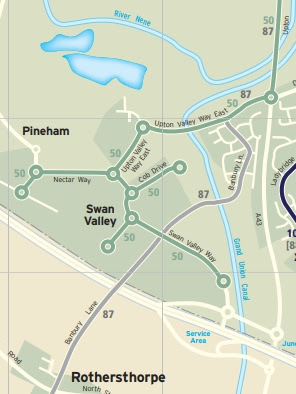 ... and similar to Brackmills for Clipper Logistics are the ones causing the problem. 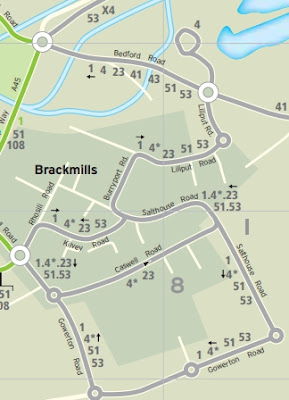 We know about Amazon, but Clipper is a similar warehousing operation, serving various retail chains. 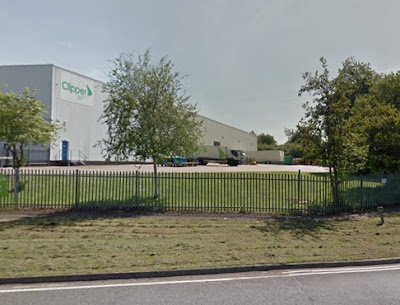 Does the council really think that the happy workers beavering away at their oh-so-fulfilling tasks in these havens of retail distributive excellence will obediently queue up 2 metres apart as they set off enthusiastically for their next shift?
An anonymous Northampton correspondent has obtained a photograph from the Amazon and Clipper joint staff training centre at Hereford; showing the Northampton bus queue crew ready and prepared for the first Monday morning of the new stand 18. 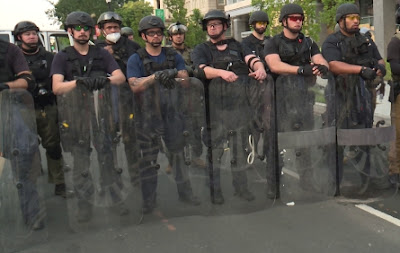 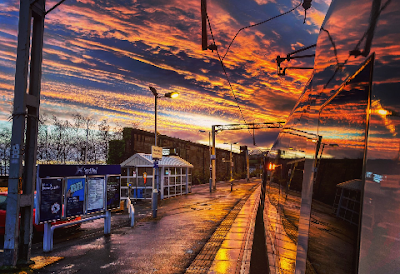 It appeared via Twitter and, as usual in these busy days, fbb forgot to not where it was taken.  Nevertheless, it is still gorgeous!
It Makes You Think 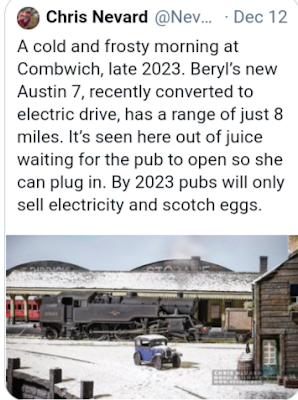 Is This Bus Going To Jump? 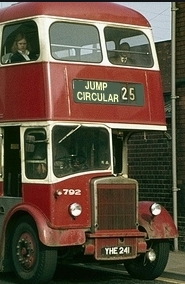 Nay, luv; but it'll jiggle abaht a bit.
Or you could have a modern Kriss-Muss jumper bus ... 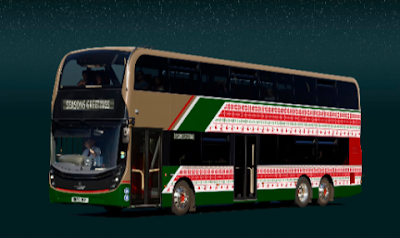 ... from ADL,
Tomorrow fbb will move into his Christmas Mini-Blog season; that is assuming he recovers swiftly from a dental extraction this morning. 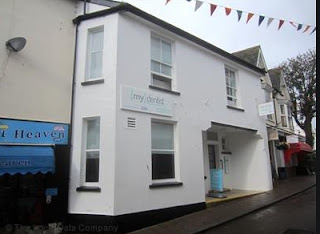 Nativity plays are always a great delight, at school or at church. Your old codger-blogger well remembers No 1 son (as Joseph, performing in font of a hall full of doting parents) ordering the three Wise Men to start again and get in the right order to present their gifts! A chip off the old block, some might say! This picture does NOT include No 1 son but is typical of the genre. 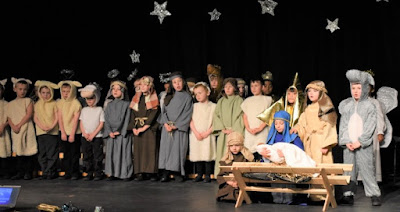 But there might be a disadvantage in the huge cast production commonly seen in a school nativity scene.
Only Luke's gospel records the baby's birth - remember that Matthew's "Wise Men" arrived at the house where the family lived when Jesus was about 2 years old.
So this is what Luke says about the setting.
Mary was pregnant, and while they were in Bethlehem, the time came for her to have her baby. She gave birth to her first son, wrapped him in cloths and laid him in a manger - there was no room for them to stay in the inn.
And about the shepherds and their place at the locus in quo ...
So the shepherds hurried off and found Mary and Joseph and saw the baby lying in the manger.
Everything else surrounding the birth has been added later to create the much enhanced Kriss-Muss story.
One likely location for the manger would have been a cave; used then, and today, for wintering the animals. 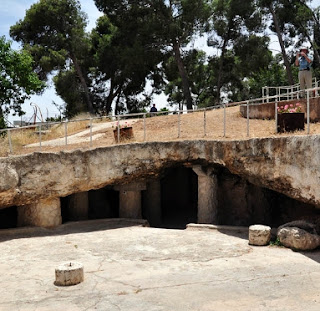 The animals would have been out in the fields (like the sheep) and no Jewish Inn Keeper would ever countenance putting guests anywhere where animals might have dwelt (and other things!) recently. Cleanliness rules were more than just 20 seconds hand washing back then.
So:-
NO stable
NO cattle shed
NO star
NO wise men
NO gifts
NO ox
NO ass
NO donkey
NO sheep
NO horse
NO angels
NO blue frock
at the Nativity.
So what's left?
A miracle birth, the Divine baby, mum and dad, an improvised cot and the visit of a clutch of low life encouraged to come by another weird happening.
Your couldn't make it up; no, really, you couldn't. And Doctor Luke didn't. 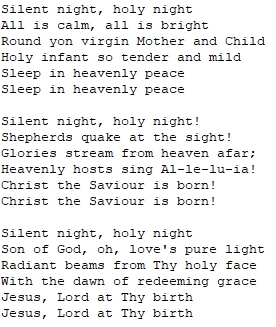