Where Goes With Logos? Who Knows? (5) 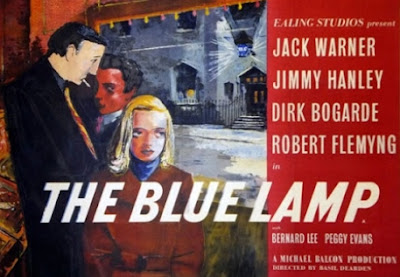 The film that introduced us to P C George Dixon (Evenin' All).; and killed him off, highlighted the "logo" of a typical Police Station. 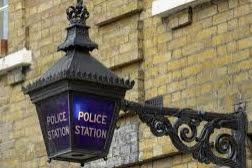 As local police stations disappear (its all on line, remember?) so do the blue lamps; although some surprisingly modern establishments have one adorning their slick concrete frontage as here at Paddington Green, London ... 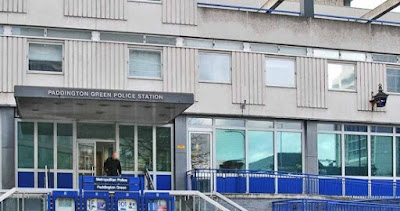 Celebrating 60 broadcasting years, that bastion of all that is Northern, Weatherfield, has a splendid cop shop with TWO blue lamps ... 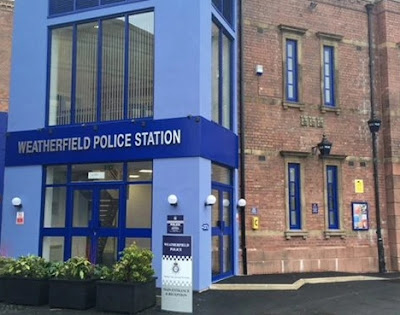 ... or even four if the Director pokes his cameras to the left of the shiny new entrance. 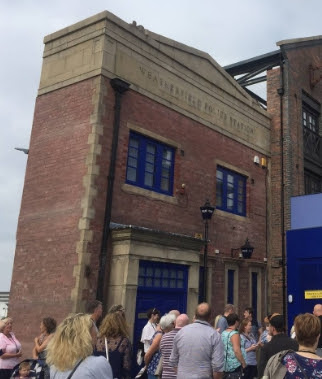 A bit greedy, you may think!
The British Railways "sausage roll" ...

... lasted officially for only 24 years, although it took some time for the "double arrow" to replace them.

The green cross of pharmacy has spread in recent years, but it is by no means standard. 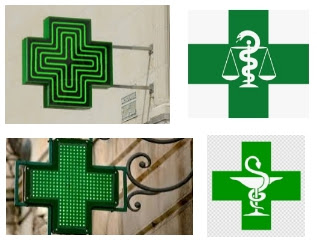 A successful logo should have three qualities:-

Often the "meaning" will only accrue as longevity combined with distinctiveness establish themselves. The British Rail(ways) zot was pretty much ridiculed when it appeared ...

... on the grounds that the double arrow implied that the British Railways had "lost their way(s)". But it remains fixed firmly in our consciousness today. Do these have the same impact? 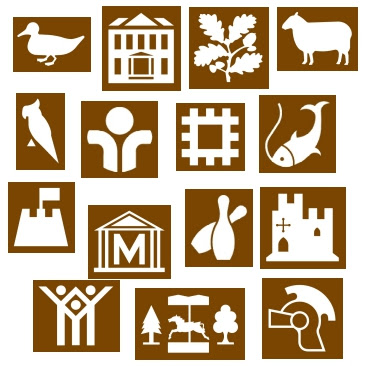 They are just a selection of  official white-on-brown Department of Transport symbols for ypurist destinations!

The London Transport roundel definitely has longevity as in has been in existence for well over 110 years. Of course, it has changed as we have seen. Here it is for London's trams ... 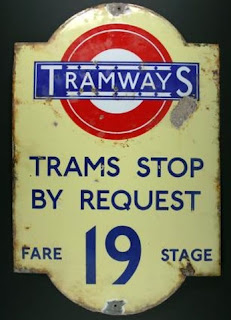 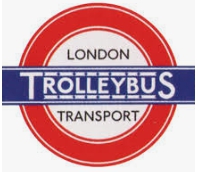 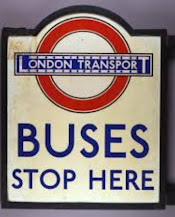 The shape continued in certain places, even with a simplifying of the logo. 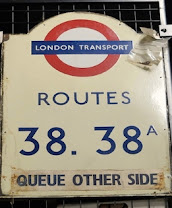 But one man, above all others, turned Frank Pick's logo into an icon. That was architect Charles Holden. 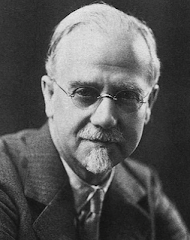 His Art Deco station designs changed the face of public transport in the capital. He provided dramatic buildings for the Piccadilly line extensions (example only) ... 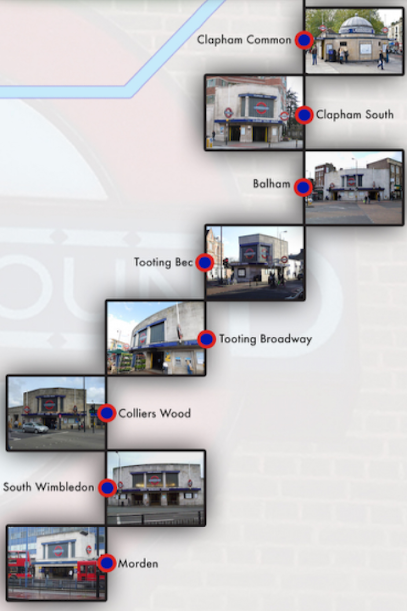 ... and for the short underground stretch linking the two former GER legs of the extended Central Line. 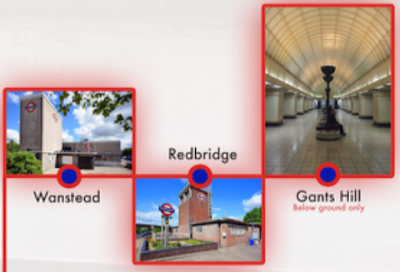 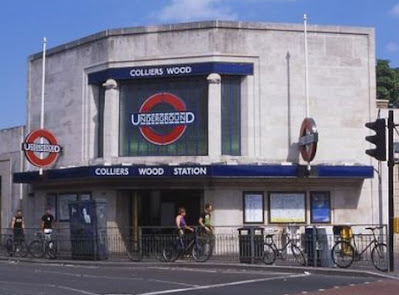 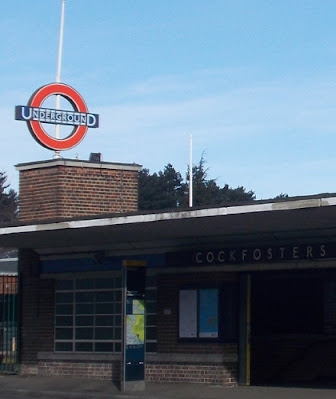 ... and Holden placed the brand front and centre in the street, as here at Uxbridge. 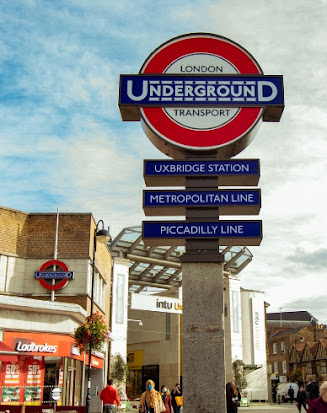 Note that many of the refurbished signs have retained the original logo plus "London Transport" - very stylish and an excellent but subtle piece of preservation.

Others have used the logo architecturally as here, cast in concrete at Borough station (Northern Line). 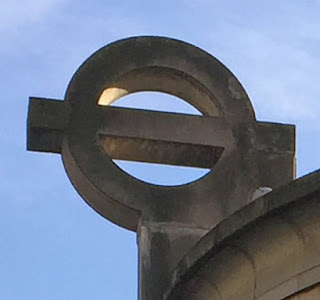 The roundel is installed inside booking halls ... 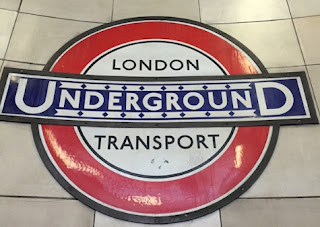 ... and even re-created in non-standard materials as below with tessera. 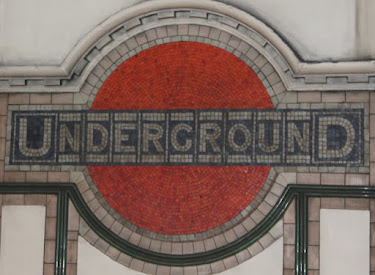 There are clocks with logo hours ... 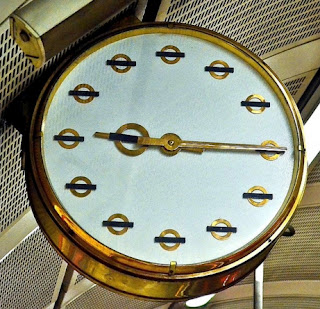 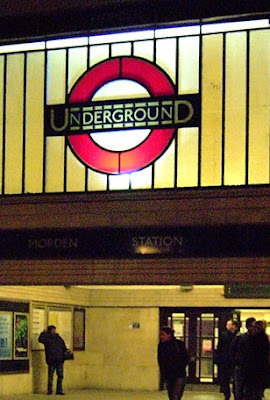 ... and surely, Brixton (Victoria Line) is the biggest and brightest bullseye of the lot. 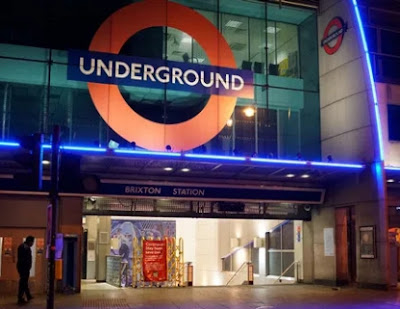 It is always relatively easy to find an Underground station!

Attack Of The Killer Bread Bins 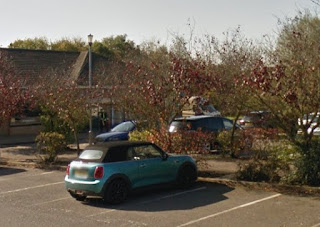 Though the foliage you can see the Co-op store at Wootton Field estate, Northampton (on Wootton Hope Drive). Should you wish to visit, you could take Stagecoach's 12/12A "circular" from the town centre.

Here you would see the Killer Bread Bins lined up and ready to exhort their destructive purpose.

A little further away, Northampton correspondent Alan was able to photograph one of these much-feared Dalek derivatives as it pursued a terrified local shopper. 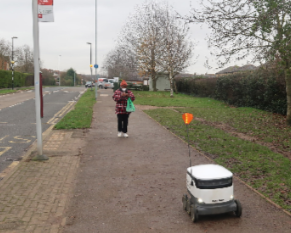 Alan fled in fear and dread; and did not stay to see the outcome of this, a typical confrontation. Another beast is seen waiting outside the local school ... 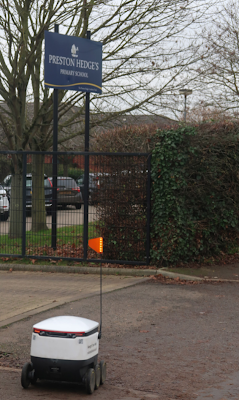 ... famous for its misplaced apostrophe! What dastardly deeds may be done here?
Lest our readers add this scare to Covid 19, the possible collapse of the Brexit talks, and the reduction in size of Toblerone, fbb can explain all with the help of the local press.

Customers in a second town have begun to receive grocery deliveries from robots.

Eight Co-op stores in Milton Keynes already use the autonomous vehicles in partnership with Starship Technologies. The initiative will now serve about 5,000 households in Northampton with contactless deliveries.

The robots will serve the Wootton Fields store, travelling up to three miles (5km) to customers' homes.

The robots:
Travel along pavements and cross streets, just like pedestrians
Have 10 cameras, ultrasound sensors, radar, and GPS
Are able to see 360 degrees
have a "situational awareness bubble" around them
Use sophisticated computer vision and software
to identify objects such as cars, pedestrians,
traffic lights and pavements

So nothing can possibly go wrong. 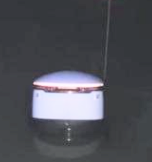 A delivery robot had to be rescued when it veered into a canal.
The machine, one of many which deliver take-aways and groceries in Milton Keynes, went into water near New Bradwell on 28 July.

Bex Morgan said she had been walking her dog when the "robot just drove straight into the canal".

Hmm? Back to the drawing board, chaps? The Killer Bread Bins use similar technology to driverless cars. BE AFRAID, BE VERY AFRAID.

Even some Christians struggle with the concept of Jesus being fully human and fully divine (i.e. the "Son" of God); but for an omnipotent God, who exists untramelled by the law of physics,  outside of human space and time, it would be utterly easy to arrange.
Apart from the childish opinion "there is no evidence that Jesus ever existed", when the evidence is far stronger than many historical events taught as "facts", there are many who like to claim that Jesus was "just a good man", and nothing more.
"Just a good man" who told the biggest lies in History? No way!

Take the Divine away and there is nothing to celebrate, just an empty Kriss-Muss.
The angel** said to the shepherds, “Don't be afraid! I am here with good news for you, which will bring great joy to all the people. This very day in David's town your Saviour was born - Christ the Lord! And this is what will prove it to you: you will find a baby wrapped in cloths and lying in a manger.”
Accept even the possibility of the divine can you can have a real, meaningful   CHRIST  mas  !
And a song by Graham Kendrick. 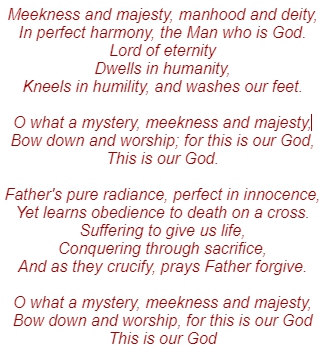 ** P.S. Angels manifesting themselves on earth NEVER have wings. They appear in human form.
Posted by fatbusbloke at 02:00