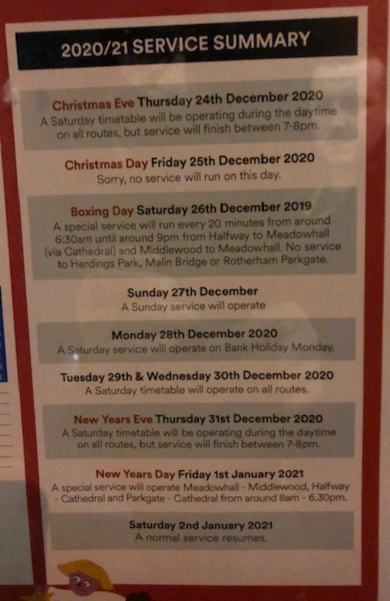 Your world-weary blogger is oft upbraided for his spilling mistooks, quite writely. But the old man protests that his spelling skills are excellent - it is just that his verbal adeptness is not shared by his laptop!
Anyway, the above poster from Sheffield Supertram shows that even the greatest of organisations (?) can manufacture bludners as good as those perpetrated by fbb; see the Boxing Day paragraph.
Mercers Row; The Final Word 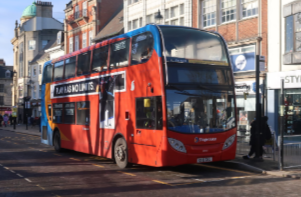 fbb bets that is will NOT be the final word!
But from Friday 18th inst buses started using one of the two new sheep pens on Mercers Row. After sending the above snap of an ex Warwick Unibus at its new stand, Alan checked on how this fairly significant change was being promulgated on-line. 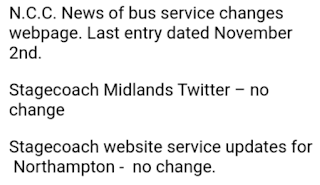 It was Stagecoach, you may remember, who assured eager Northamptonians that they would tell them as soon as the new stops were in use. They didn't.
But Alan, in a search mode akin to pigs looking for truffles (no inference other than the concept of a thorough search is intended!) ... 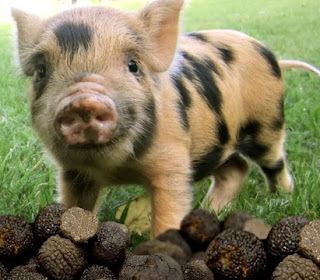 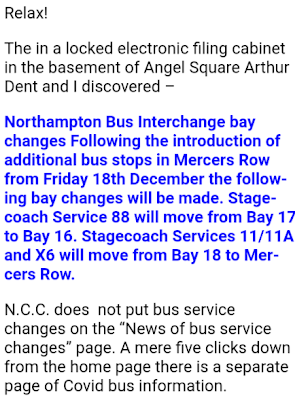 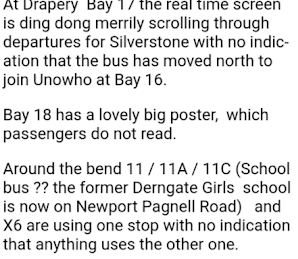 The noble and dedicated truffle snuffler then appends a guide to ANY search for ANY information. 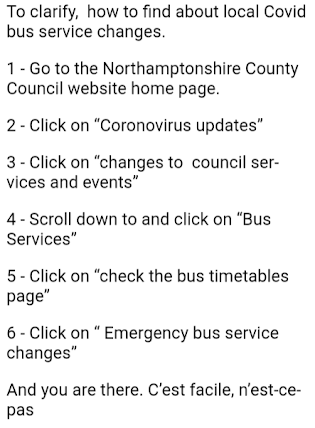 It is, as they say, all on line - if you have the nose to dig up those tasty truffles of essential information. Alan concludes:-

(Delete "not" to avoid the double negative.)
But there is/was ONE poster in the town and one only! 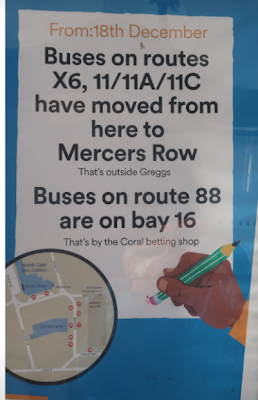 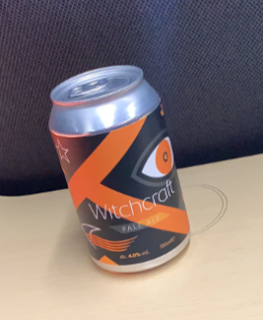 On Friday last, you could get a free canna if you chose to travel on Transdev's rebranded Witchway with super Sky Class buses; and many did. 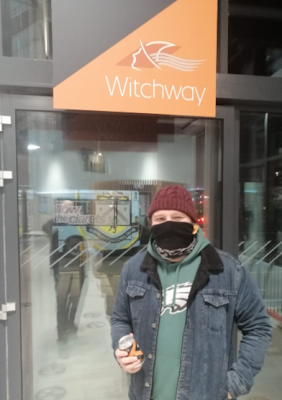 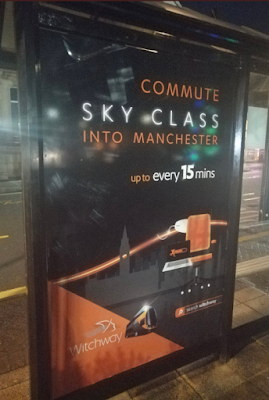 If you so wish you can order cans of the Burnley-brewed beer on line. 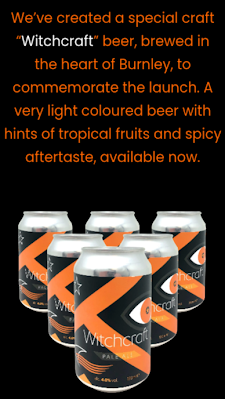 Now here's the problem. fbb, as a committed Christian, is warned in his Bounteous Indispensable Book of Life's Experiences to steer clear of anything to do with witchcraft, fortune telling and the occult in general.
So should he, or shouldn't he?
In the end he concluded that it is all about buses and not about old hags with buck teeth, pointy hats and a frog for a friend; so he has ordered a pack of six (v. expensive!). In so doing, he spotted a beer he had not seen aforetimes, namely the "Thirsty Six" brew from Harrogate. 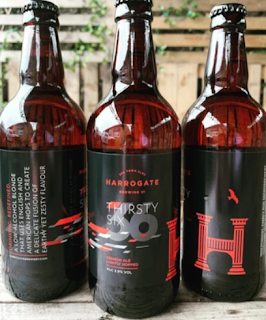 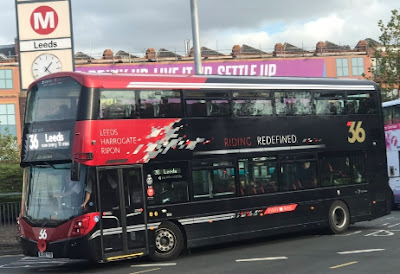 Wot? No Sky Class?
It is all what they call "creating desire" with a can of the local brew.
How about "Alcoholic Axe" or Fizzy Frances" for fbb's local bus operator, Axe Valley (not very) Mini Travel, proprietrix Frances May Searle? 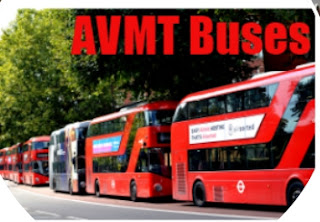 fbb has not yet seen any of their latest fleet acquisitions as headlined on their Facebook pages.
QuayLink Becomes QuayCity 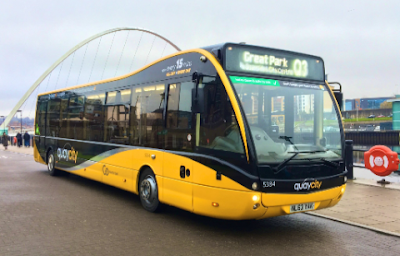 The "new" buses are now out on the road, and very smart they look. The re-branding makes sense because the former trendy service between Newcastle centre and the Quayside regeneration areas north and south of the Tyne are now fully-blown "City" services than just happen to go via the Quays. 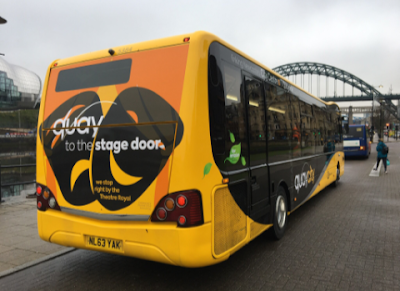 So we have "theatre" branding on the back of NL63 YAK. But, keep it secret, although these are "new" buses for the Q services, they are not new buses.
In their previous life they were branded CityLink for route 58. 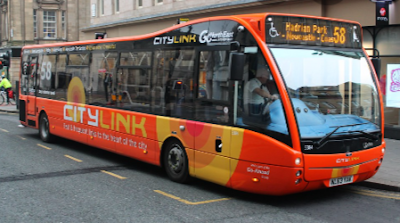 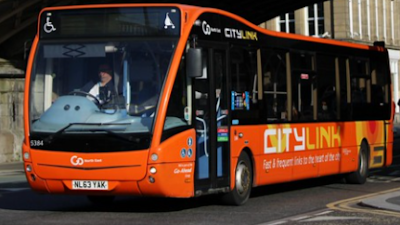 Carols?
Originally, c.1300, "joyful song," also a kind of dance in a ring, from Old French carole "kind of dance in a ring, round dance accompanied by singers," a word of uncertain origin. Perhaps from Medieval Latin choraula "a dance to the flute," from Latin choraules "flute-player," from Greek khoraules "flute player who accompanies the choral dance," from khoros "chorus" plus aulein "to play the flute," from aulos "reed instrument".
The meaning "Christmas hymn of joy" is attested from c. 1500.
There is no doubt that Carols remain very popular, even if   CHRIST  mas  has lost its purpose for the majority. The Salvation Army plays them in the High Street ... 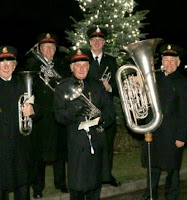 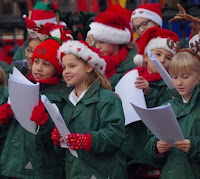 Still today we have the traditional Nine Lessons and Carols from Kings College Chapel, Cambridge. 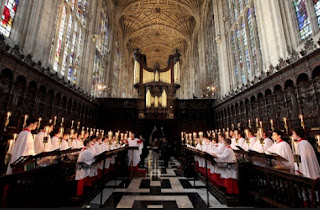 This particular service was invented in Truro as a means to keep revellers out of the pubs!
Sadly, carols and carol singing are all-to-often associated with one verse of Silent Night, followed by the rattle of a collection box or an outstretched hand then culminating in one verse of We Wish You A Merry Kriss-Muss.
Almost all of the content of this "Advent Calendar" will be found in "traditional" Christmas Carols.
Here is one of your author's favourites. Classed, wrongly, as a "children's carol" (possibly because it mentions children) it contains some profound and sublime truths about the baby of  CHRIST  mas  . 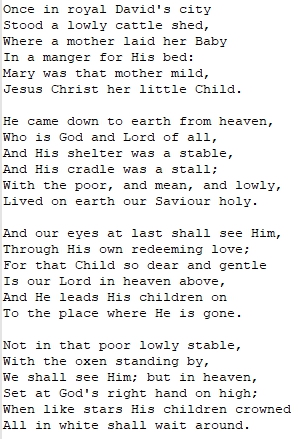 Verse 1 - the baby Jesus was God made man
Verse 2 - God chose humility not power for his earthly Saviour
Verse 3 - Jesus came to lead "his children" to Heaven
Verse 4 - Those who are so led will see Jesus in Heaven
Wow!
Every time we sing a Carol (and not when we warble a Christmas "Song" like Jingle Bells) we experience just a glimpse of the message of the Bible, an extract from the Good News (Gospel) of Jesus The Christ.
Posted by fatbusbloke at 02:00