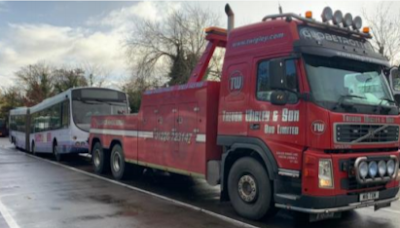 When fbb reported on the withdrawal of First Bristol's final bendibus in Bath, he added that one had been offered to the Isle of Wight Bus Museum. The old man expressed some surprise as articulated buses have never operated in normal service on the Island.
They did appear, as part of GoAhead's "events" fleet, to transport customers for the Isle of Wight Festival. 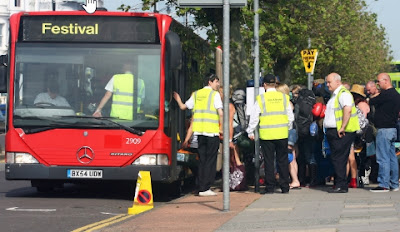 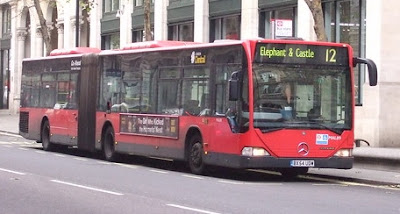 ... until Boris' brutal bendibus ban removed from the Capital's streets the most useful vehicle for transporting the Big Smokes's crush crowds.
Be that as it may, fbb has been sternly informed that the Museum graciously declined the offer; so that's one place where First won't be able to dump its unwanted rubbish!
Island Sunset 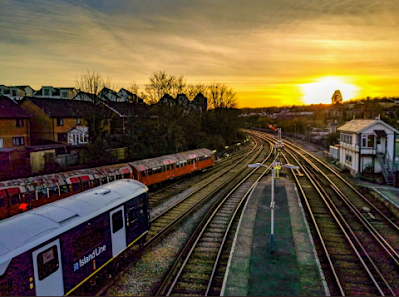 As the sun sets at Ryde St Johns Road Station, so the metaphorical sun sets on the old 1938 stock stabled beside the "new" 484s. Will Vivarail's rebuilds still be ruing in 80 years?
Metrolink Magnificence 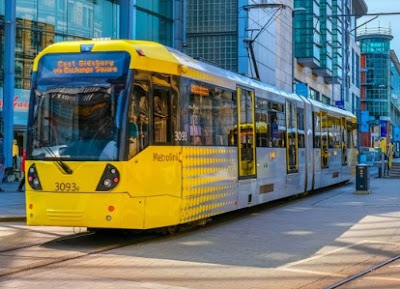 Bit not that Metrolink in sunny Manchester (well it is sunny sometimes!); this Metrolink ... 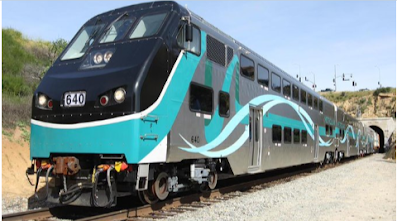 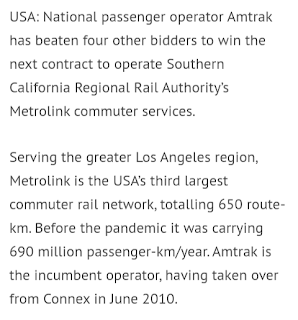 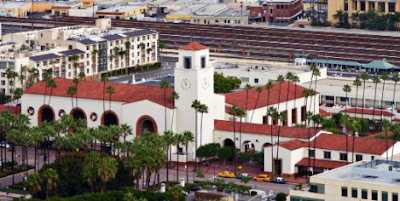 ... which is rather splendiferous. 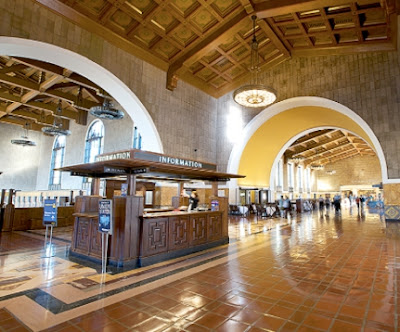 L A also has a Metro system (as opposed to Metrolink - confused.com). A joint map (extract only) shows the Metro, mainly focused on the "Metro Center" ... 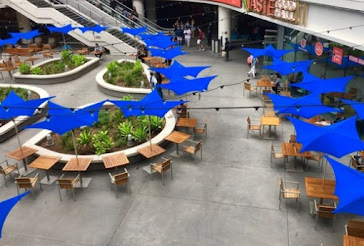 ... which is somewhat more utilitarian in style! 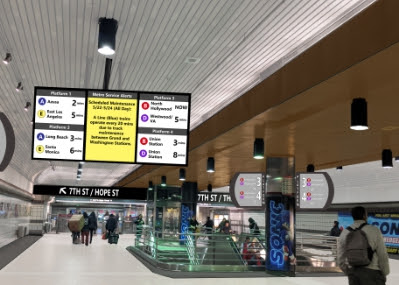 On the map extract below, Metro lines are thick ... 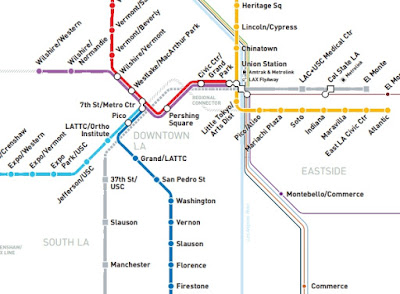 ... and Metrolink (outer suburban) lines are thin; as is the train service on them. The description "commuter lines" is apt! Here is the Antelope Valley Line (GREEN) from Lancaster ... 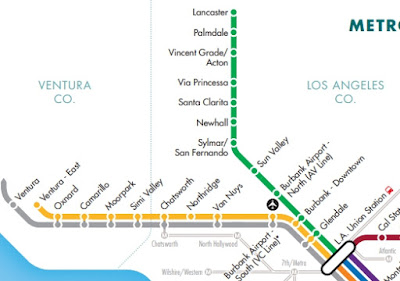 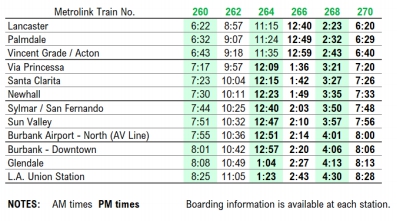 24 hour clock - phooey! But the trains are posh multiple units ... 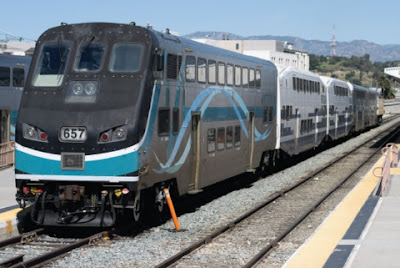 ... plus a good smattering of loco hauled trains. 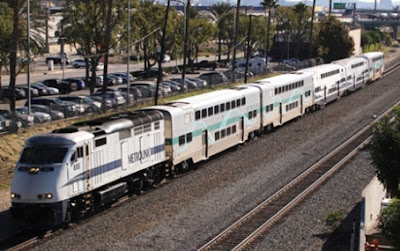 Quite different from the Manchester version! 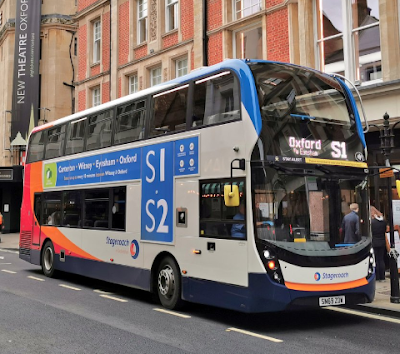 A twitterer was not very impressed with this "basic" route branding in Oxford. It is certainly a lot easier to do - and to undo - than plastering a jigsaw of complicated vinyls around a vehicle's windows and cute little corners.

The Greening Of The Railways 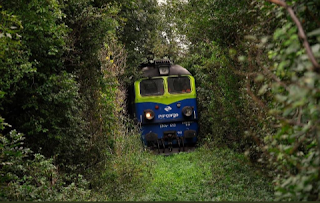 Apparently, this is a working freight line in Poland!
You do see some off things o the railways of Poland. 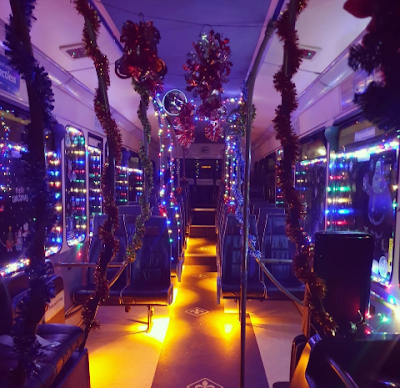 This from Stagecoach in the Wirral. 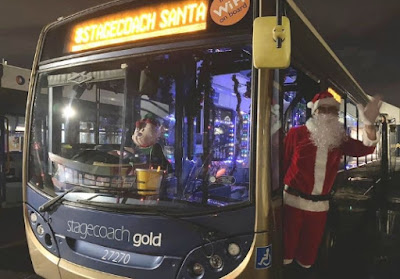 Do you get a prezzie? 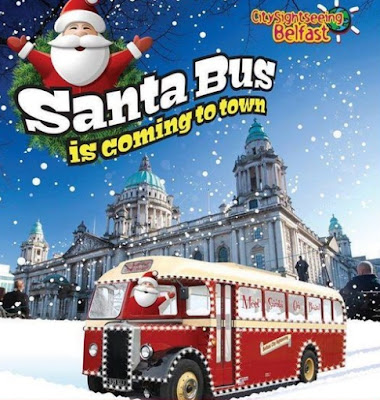 ... it's a commercial venture from City Sightseeing. You can book the bus for you street party. Whether this service is still on offer in today's unprecedented circumstances is uclear.

And who brings your prezzies? 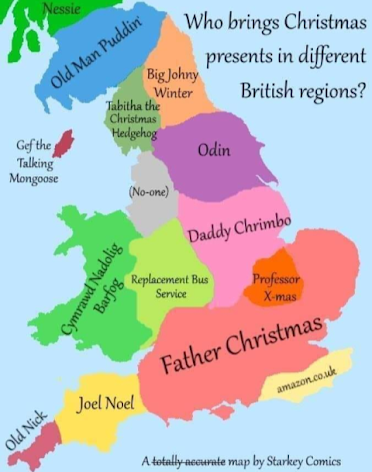 Not to be taken seriously! Neither should we really take Santa Claus seriously.

Very little is known about the historical Saint Nicholas. The earliest accounts of his life were written centuries after his death and contain many legendary elaborations In one of the earliest attested and most famous incidents from his life, he is said to have rescued three girls from being forced into prostitution by dropping a sack of gold coins through the window of their house each night for three nights so their father could pay a dowry for each of them. That is the only possible link with present giving.

Tomorrow, we look at the transport implications of a glass of something rather nice. 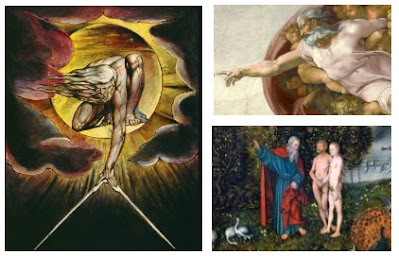 They did their best with the impossible. Even the Bible struggles with the challenge of providing an imaginable picture of God; this just a short extract from the prophet Ezekiel:-
Above, there was something that appeared to be a throne made of sapphire, and sitting on the throne was a figure that looked like a human being. The figure seemed to be shining like bronze in the middle of a fire. It shone all over with a bright light that had in it all the colours of the rainbow. This was the dazzling light which shows the presence of the Lord.
Lots of "appeared to be", "looked like" and "seemed" as Ezekiel struggles to uderstand his vision.
In Bible Class we were taught that the best way to TRY to understand God was to look to the life and work of Jesus. Those astounding and oh-so-brief three years from age 30 to age 33, when he was at work in Judaea, give us an insight into who God is and what He offers.
Whether we accept or reject God is ultimately a decision of Faith; but real Faith is never "blind", it is always based on tangible evidence. A decision should not be made out of rumour or ignorance. That is why  CHRIST  mas  is more meaningful than Kriss-Muss. It is the start of a life-changing story.
Posted by fatbusbloke at 02:00