So often, fbb has to bring bad news about public transport; but today a heart-warming tale very appropriate to, say, a Dickensian view of the Festive Season.

We travel to Porthleven, on the coast near Helston of Flurry Dance fame. 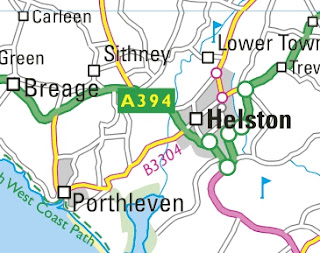 It is a quaint little town with a harbour ... 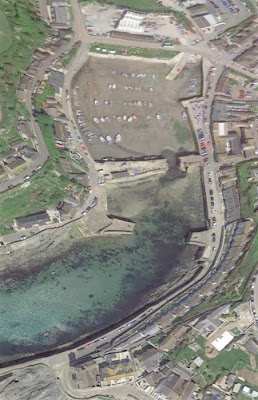 ... and, bottom left, a much photographed tower. The tower is part of the Bickford-Smith Educational and Literary Institute. 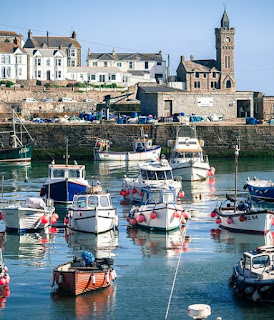 William Bickford-Smith's (1827 to 1899) grandfather had developed a method of making mining fuses using rope which was safer than previous methods and with Smith's father had established a factory at Tuckingmill, Cornwall. William became a partner in his father's firm of Bickford, Smith, & Co. and lived near the factory at Camborne. He was also chairman of Helston Railway and captain in the 15th Cornwall Rifle Volunteers and J.P. for Cornwall.

As was the custom in those days, he gave the people of Porthleven their "Institiute" containing reading room and library for the improvement of the eddication.

He built it prominently on the sea wall this ensuring that news items about the weather could always be illustrated by waves threatening the tower. 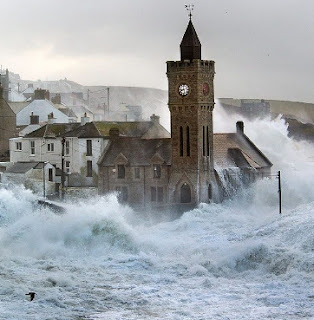 The main bus service to Porthleven was First's service 2 ... 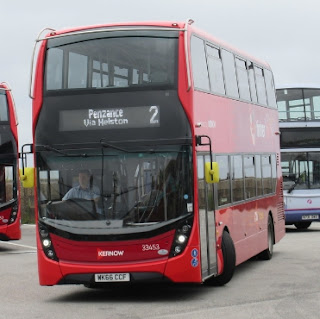 ... running from Falmouth via Penryn, Helston and Porthleven to Penzance. Once every hour, it was progressively trimmed down and became two hourly off-peak. Then, in a reorganisation it was cut back to Penryn Campus, outside Falmouth, renumbered U4 ... 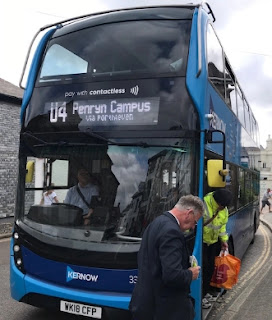 ... and upped back to every hour. There were always oodles of buses from Campus into Falmouth. 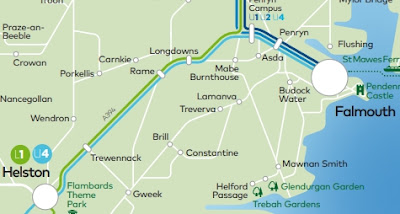 It has now reverted to running "all the way". 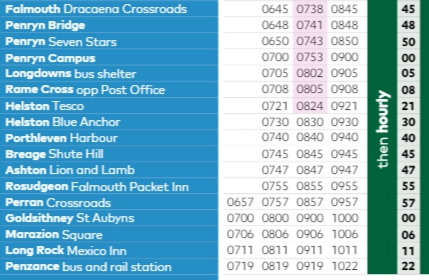 Porthleven also has the dubious privilege of some inexplicable "oddments" on Go Ahead Transport for Cornwall's service 38.

... inexplicable because 38s only go from or via Porthleven in one direction; contra-flow trips are lost (presumably) in the morass of school journeys, 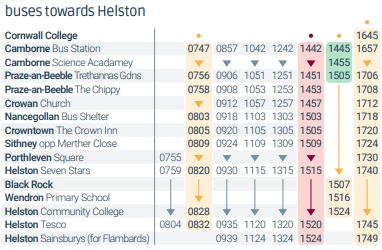 Thinks? Is Acadamey the Cornish language spelling?
Blog readers will remember that Cornwall Council, in its desire to create one integrated network, with coordinated fares and timetables has managed to create two non-integrated networks with uncoordinated fares and timetables. Well done, politicians, for turning a reasonably stable network (almost all run by First Bus) into an incomprehensible mess.
As an example of this appalling nonsense, here is Transport for Cornwall's route A1. 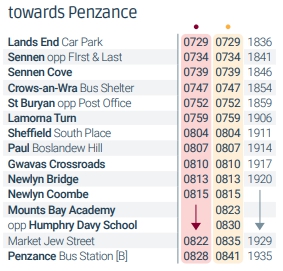 No mention, of course, of First Bus A1 which runs two hourly (hourly in Summer).
Likewise Transport for Cornwall's helpful (?) network map ignores First's routes totally. A U4 is shown running from Penzance to Helston only ... 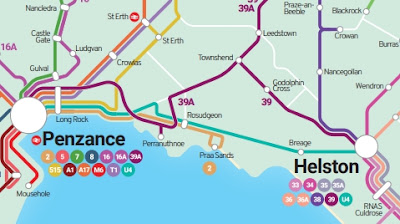 ... but this time, no such timetable is published by Transport for Cornwall. Maybe once upon a time they did run a tendered journey or twoto supplement First's "proper" service?
Nuts!
But back to Porthleven.
The main stop on the harbourside has a rather splendid shelter in which the crowds (?) can congregate. 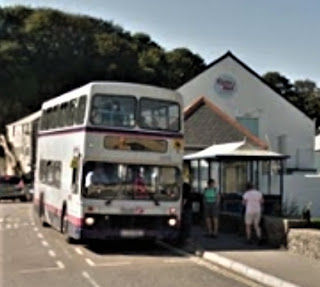 The bus, like the Google Maps picture, is old. Such onmibological delights have long since been expunged from the First Cornwall fleet!
So, when the early morning passengers arrived for their bus to Helston and or Falmouth, they found the shelter already occupied by an intruder. 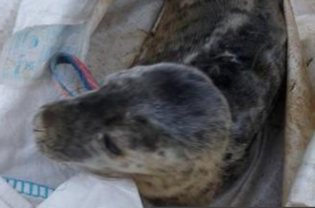 Sally (or Sydney) Seal had gone out to play without a mac and wellies and was overcome by one of those ferocious seas for which the Institute is famous. Sensibly, the little chap(ess) had sought sanctuary for a short sojourn in the spume-free shelter and, as you do - seal or human - nodded off.
Said snoozing seal was duly removed, examined by the vet'nary, pronounced A-OK ... 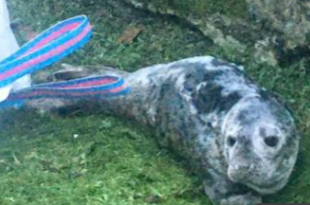 ... and returned to a less stormy sea.
All together, now ....
Aaaaaah!
None of the on-line accounts suggest that the displaced animal tried to board a bus.

It is true to say that "The Devil" has become a cartoon character these days ... 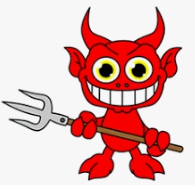 ... although the overdone sunburn, the pointy spock ears, the horns and the toasting fork have no place in Bible narratives; they are an invention, largely, of mediaeval artists seeking to scare people into obeying God. It didn't work (much?) because it was (and is) just plain silly!
God is a being, an entity, a spirit from  outside our space and time who wants to give Good to those that follow his ways. God is the embodiment of Good, to whom we give human qualities to help us understand that which, by definition, is beyond our understanding.
In the same way, The Devil is the embodiment of forces for evil to which we give certain human attributes to help us be aware of the threat made by evil generally, on our lives and in our society.
We all know that evil can, and does, infect any human and spread itself around. It starts small (e.g. only a white lie) and soon grows like an infection unless something is done about it. So we have the image of life as a battle between good and evil, between right and wrong, between destructive and constructive.
It is very easy to lose the battle. 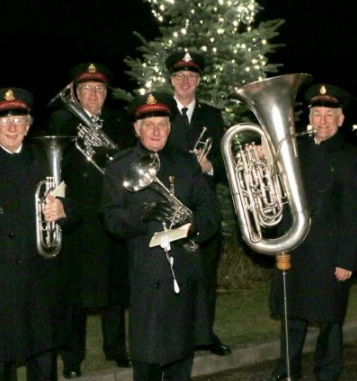 Thus we have
The Salvation Army
Onward Christian Soldiers
Fight The Good Fight
and a little ditty we used to sing in Bible Class.

And that's what   CHRIST  mas  is for!
P.S. The fbbs were reading some prayer requests from London City Mission. The missioner in question was delivering cream teas to his neighbours in Lockdown. An inspiration, a breathing in, of an idea from God. 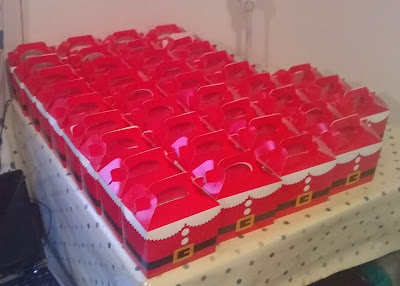 So here are 39 afternoon teas being distributed today to those who normally (normality long gone!) attend the fbbs monthly Sunday's Best meeting (30 approx) plus Monday Matters Bible Study clientele and a few others.
Posted by fatbusbloke at 02:00