Whatever Happened To The Milkman?

If you are ancient, like fbb, this advert will be familiar ... 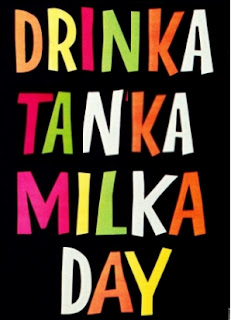 Not far from fbb mansions (in sunny Seaton) is the Colyton terminus of the local tourist tramway. Although the former branch line station building at Colyton has been adapted and extended ... 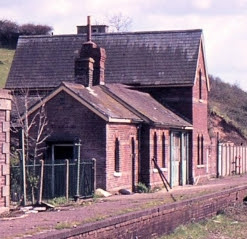 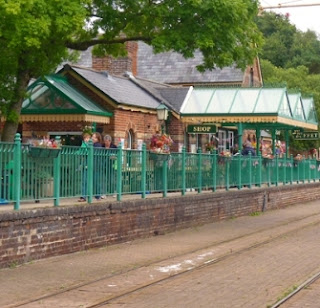 ... one little brick-built hut on the platform remains unaltered from days gone by. 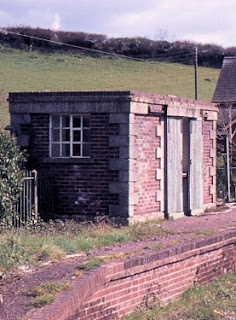 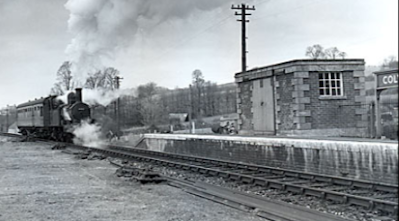 ... and here it is from the station access road. 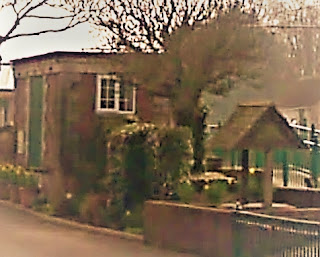 It is identical on both sides, but its use is not immediately obvious.
In fact, local farmers would drive their horse and cart (later tractor and trailer) alongside the raised doorways and trundle their churns of freshly milked milk into the shed. Along chugs the morning train to Seaton Junction and later the afternoon ditto.
The station porter trundles the churns from the platform side and heaves them into the guards van or even a goods van tacked on the back of the two passenger coaches. 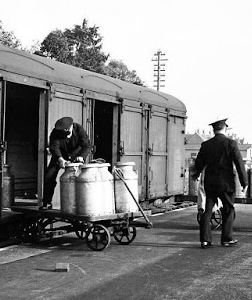 In some places this transfer was big business! 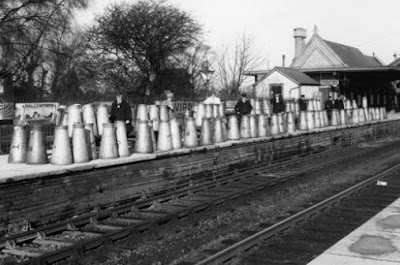 Colyton's little load of lactic loveliness would be unloaded at Seaton Junction and moved into the  Express Dairies premises. 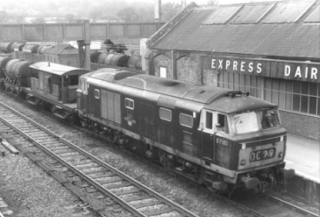 Meanwhile a fleet of lorries would be touring the local farms that lacked a nearby railway station ... 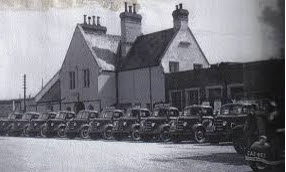 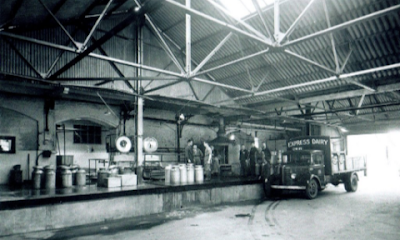 After pasteurisation the milk would be transferred to tank wagons then lined up in the yard ...

... for transfer to the bottling plants in the bigger towns and cities. 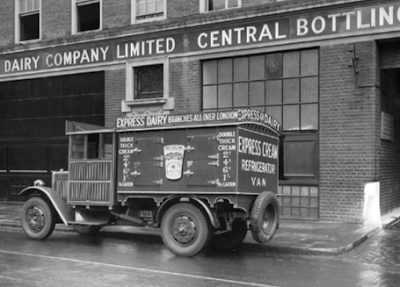 So slick was the operation that milk that was in the cow in the early morning could well be on the doorsteps of London early on the next morning. Express Dairies took its name from the "express" timetabled milk trains that ensured fresh doorstep deliveries.
The standard tank wagons were usually six wheelers ... 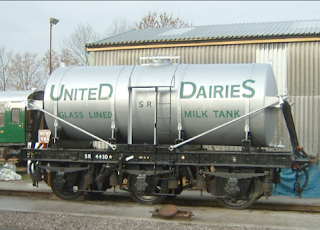 ... and often glass lined for hygiene purposes. The extra axle was necessary because (a) milk was more dense that most petroleum products and (b) the glass lining added much extra weight to the tank itself.
Triang had a OO gauge model from their early days in the 50s which was too short, badly detailed and only had four wheels, making it a simple model of the very early (1920s) milk tanker. 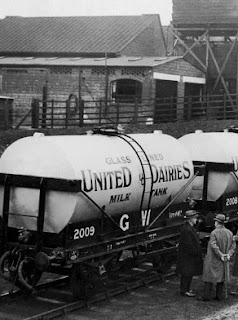 But it was a popular model and was subsequently improved with better lettering and wire "stays". 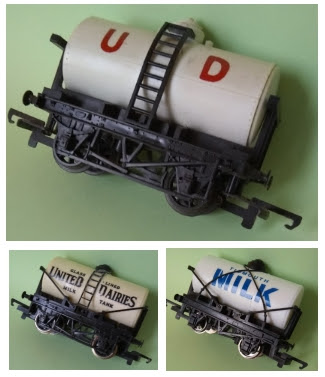 Later, when Triang was the "new" Hornby, the model re-appeared in a slightly different guise for Tidmouth on the Island of Sodor, home to Thomas the Tank Engine.
In a last-ditch attempt to make some money, the ailing Hornby Dublo introduced the first ready-to-run six-wheeler in the early sixties. It was a much better model but a complex expensive-to-make mixture of plastic, cast metal, tinplate and wire. 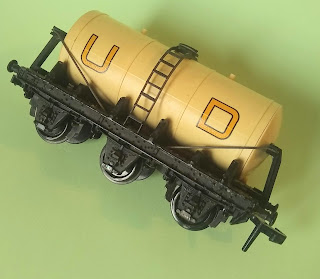 The tank and its "saddle" were plastic, the chassis was moulded metal, the brakes were cut out tinplate and the stays wire.
Then along comes Italian firm Lima with a "real" milk tanker ... 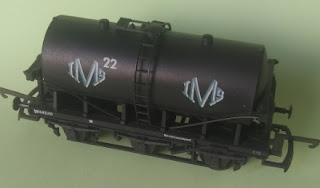 ... their only UK tank wagon. Lima stormed into the UK market and fairly quickly stormed out, going bust; and allowing Hornby to buy all their UK moulds. So, surprise surprise, Hornby then produces a milk tanker using Lima tooling ... 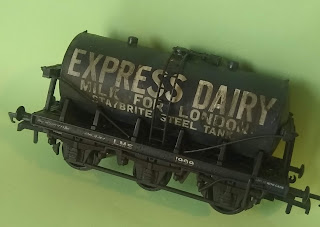 ... very much a model of the real thing. 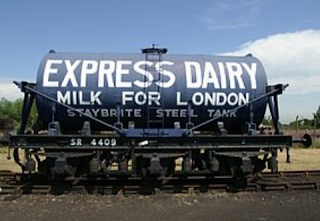 Dapol completes the picture with its version. 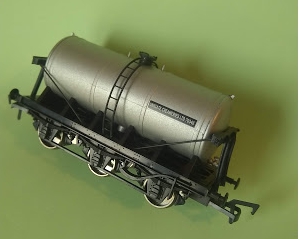 Due to a piece of over enthusiastic prodding c/o EBay, fbb has two Hornby six-wheelers, the version below with dark stains and graffiti! 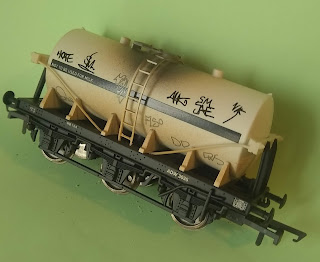 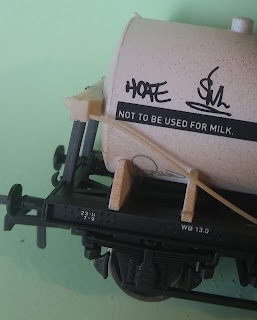 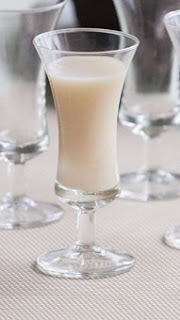 The origin and meaning of the word "holy" are obscure; some authorities suggest that it was used in ancient Mesopotamia as a descriptor of temple prostitutes! It is linked to the German work "Heil" as in "Heil Hitler" and the English word "Hale" as in "hale and hearty".
The Bible is "Holy", The Angels were "Holy", The baby in the manger was "Holy", even that amazing night was "Holy", but with shepherds crowding around and the baby screaming for its dinner (remember Divine Jesus and fully human!) it probably wasn't quite as "Silent" as the carol might suggest.
In a rather theological and emotional passage in one of his New Testament letters, the disciple Peter explains how Christian believers are the new testament "holy", set apart to show God's love and do his will. Not "holier than thou" but set apart to serve mankind and God.
But you are now the chosen race, the King's priests, the holy nation, God's own people, chosen to proclaim the wonderful acts of God, who called you out of darkness into his own marvellous light. At one time you were not God's people, but now you are his people; at one time you did not know God's mercy, but now you have received his mercy.
Yet again,  CHRIST  mas  is more meaningful than Kriss-Muss. It is the start of a very personal purposeful and powerful story. That specialness is shown in old-time art as the "halo", the halo-wearers lets their specialness shine out. 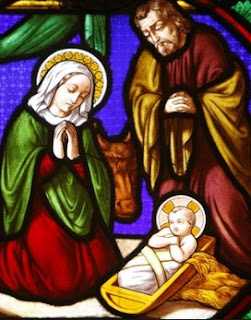 It seems a bit hard on Joe!
The halo was never intended to be the Colgate ring of confidence or a touch of the Simon Templars; it was meant to be a "glow" of the light of God's presence. 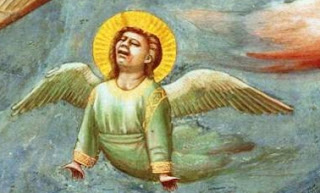 Giotto's angel seems to be suffering from toothache?
Posted by fatbusbloke at 02:00