fbb's researches for his recent blogs about the London Transport logo or roundel or bullseye kept finding references to this book. 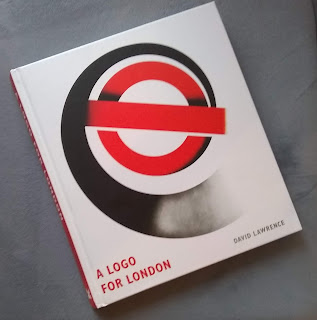 An exploration via Amazon found that a pre-owned copy was on offer at the ludicrously cheap price of £2.50 plus £2.99 postage. The cover price is £25! So the old boy just had to buy it.
It must be emphasised that this is NOT a public transport book - there are only a handful of pictures of buses and trains within its 176 lavishly illustrated pages - as they say. It is a book about design and art, but utterly fascinating none the less.
It speculates that the deep rooted origin of the "circle and bar" might well have been the logo of the London General Omnibus Company in 1906. 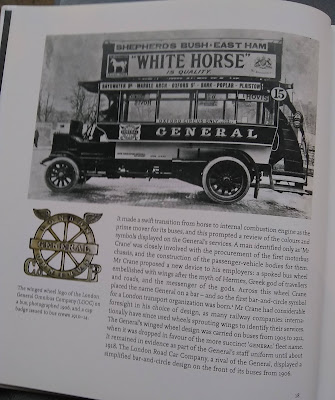 Whilst the bar and wheel was soon dropped from the vehicles, it remained as a staff badge.
The other factor in the search for a "logo" was a concern, at the highest level, about the cluttered appearance of many of the Underground stations. This was Westminster Bridge, later just Westminster. 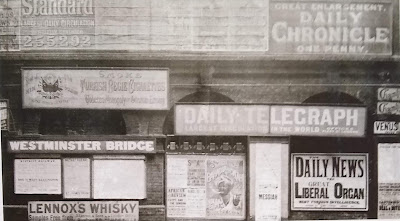 A station sign that was easily legible was a must so the white lettering on a blue bar emerged. To highlight the name and help it to stand out even more a red disc was added and the modern logo was beginning to take shape.
It was Edward Johnson ... 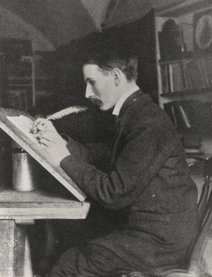 ... who formalised the roundel as we know it today. Note that he is reputed to have always used a quill pen for letters and notes, a device which he believed encapsulated the personal "art" of calligraphy and design. But his measurements were meticulous and he insisted that all concerned with this logo should get it just right.
With the formation of "London Transport" in 1933, there was a strong urge to use the logo to promote a unified system. Even relatively new station buildings were modified to incorporate the roundel. Here is Angel Station before and after receiving its corporate identity. 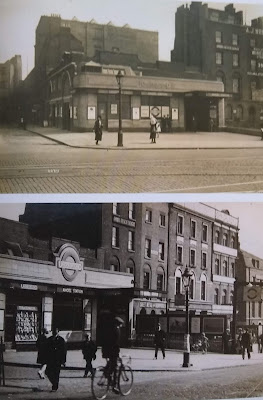 Architect Charles Holden was quick to see the benefits of the clear and very visible identity in his stations, but he also provided some visually stunning designs for the humble bus shelter. 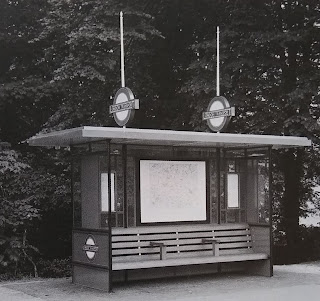 We will return to bus stops in tomorrows mini-blog, but for the time being, how about a proposal to give the roundel a yellow centre ... 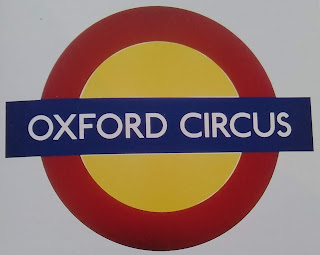 ... to make it stand out even more on station walls and out in the street. The idea was not pursued; but a crisp clear yellow can often be a better highlight than plain white, or the "open" roundels even more so. 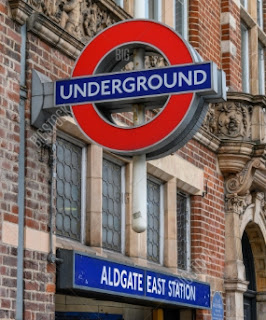 Needless to say, David Lawrence's book discusses all this in some detail. It reveals that however much you think you know about the roundel, there is much more to consider, much more to find out.
Whatever its gestation, the circle and bar has has achieved an identity far more widespread than just a logo for trains and buses; it has developed into a logo that says "this is London". Souvenir shops in the capital will enjoy a rich and rewarding trade in tat, all showing the roundel ... 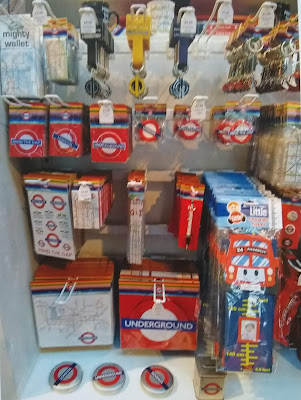 ... and all earning London Transport a fat license fee! Mind you, the shot glasses look quite neat.

In tomorrow's blog, fbb will continue his book review by looking at bus stops and poster art.
If you can find a copy of A Logo For London for a reasonable price, it will make a good holiday read, either sequentially or by dipping in as a particular illustration attracts the reader's agile mind.
But definitely a good read for fbb at £5.49 including postage.
Seasonal Snippet - Good News? 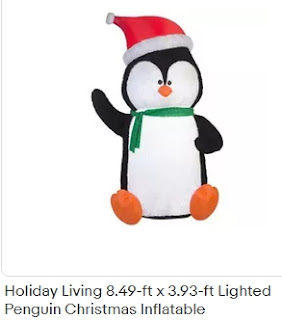 Happy Kriss-Muss from an inflatable penguin OR ... 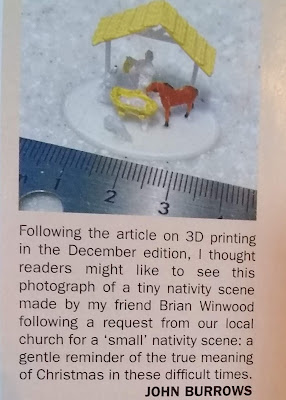 Back to the Magi a k a Wise Men but definitely NOT Kings ... 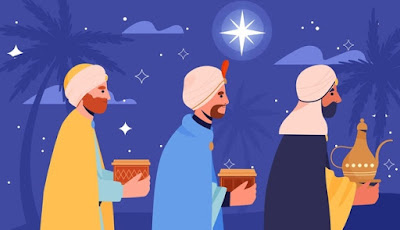 ... who brought their gifts to Jesus aged about two years - and they came, according to Matthew's Gospel, to the house where Jesus plus mum and earthly dad were living.
When they saw the child with his mother Mary, they knelt down and worshipped him. They brought out their gifts of gold, frankincense, and myrrh, and presented them to him.
As with everything else at  CHRIST  mas , so many "traditions" have been added to Matt's very simple story that the power of the narrative is almost lost. No one knows how many there were; no one knows their names and there is no reason to suppose they rode on camels. As much respectd advisers in a royal court, they would have been allocated horses and, probably, a batch of servants.
The story is there because of the utterly useless gifts for a two year old!
The Gold might have gone in his piggy bank; but the child would not have appreciated the strong smell of incense whether from Frank or not! But myrrh - embalming fluid used for dead bodies would have made Mary shiver with horror.
The   CHRIST  mas  carol gets it right, 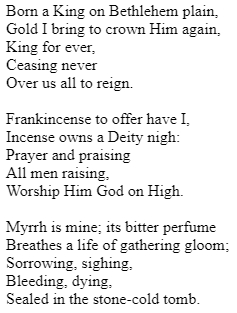 Gold for the eternal heavenly King,
Incense for a Priest - the Way to God
Myrrh for the Sacrificial Death of Jesus
Instead of "We Three Kings of Orient are ...", maybe it should be "Magi, we, of Orient are ..." Changing the words would cause a riot at Carol Services, but the change would be Biblically mpre accurate!
Posted by fatbusbloke at 02:00