It's All On Line For Christmas 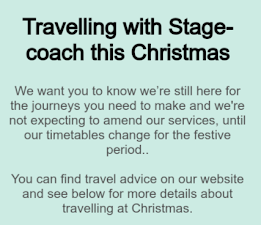 fbb has had a festive email  from the chaps and chapesses at Stagecoach, an email which gladdens the old man's heart in these unprecedented circumstances. It is heart warming to know that Stagecoach is still there for your aged blogger. Perhaps the management was concerned that fbb might think that the company was joining Debenhams and Arcadia?
He didn't think that. 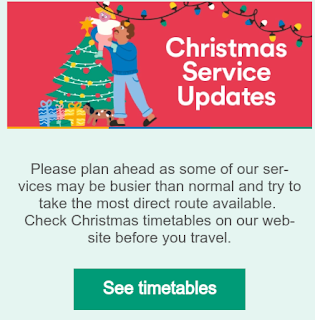 Sounds promising? fbb decided to take a look, first, at what was on offer at his old stamping ground; and so obediently entered "Northampton" as his location; and expectantly waited for the town's Christmas omnibological offering to output from the computational orifices. 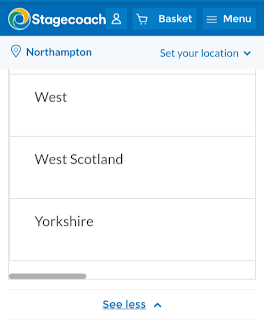 Alas, Stagecoach, in Tarrantesque mode, says "We don't want to give you that" and proceed to provide a list of all their "areas"  to scroll through. There's lots of white space ... 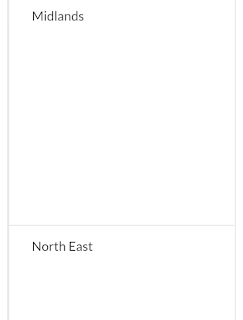 ... and there is the vexed question as to whether Northampton is in the Midlands or the East Midlands. Although Northamptonians would expect themselves to be part of the EAST Midlands (as opposed to that nasty Birmingham in the WEST Midlands), for Stagecoach, the town is in their "Midlands" section.
Nothing outstanding to see; nothing runs on Christmas Day, Boxing Day and New Year's Day (as usual) and an early finish is generously provided on Christmas Eve and New Year's Eve - when absolutely nobody wants to go out for a bevvy or visit their permitted bubble. 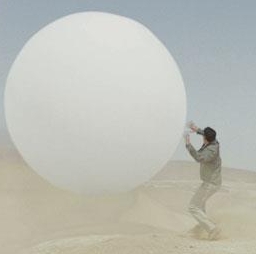 But, Northampton bus passengers beware. If your thought turn to anywhere on the service 41 ... 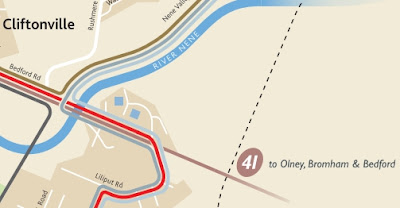 ... between your home town and Bedford, you will find that information is top secret. Is that because the 41 is run by Stagecoach East Midlands? Silly, information seeking you; Bedford is part of Stagecoach EAST so Stagecoach Midlands simply won't tell you when the last buses will run on the "early finish" Festive days.

Faced with his inability to decypher some of the information ...

... being ignorant of the locations of Brownsover and Gateway, fbb decided to look at Stagecoach Yorkshire, in particular what is happening in Sheffield.
That delight is reserved for tomorrow's blog; so be patient, excited readers!
But why, oh why does the user have to trawl through page after page of guff to get to "Northampton"? Having trawled with increasing frustration, the poking and prodding of fbb's smartphone screen eventually delivered the Northampton section of Stagecoach's lumbering web site.
Why couldn't fbb's inputted "location" take him straight there?
Notice For Martians? 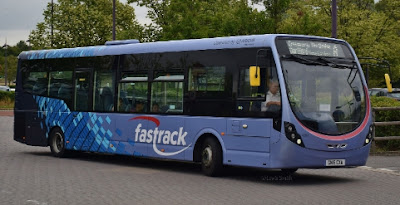 Roger French (the Uncle Travelling Matt of the UK's public transport network) has been to Ebbsfleet, famous for a stop on Eurostar and a huge car park. He was enjoying the "demand responsive" bus service to the new "Garden City" at Ebbsfleet. Yes, you understand the term well, lots of boxes all made of ticky-tacky which all look the same ... 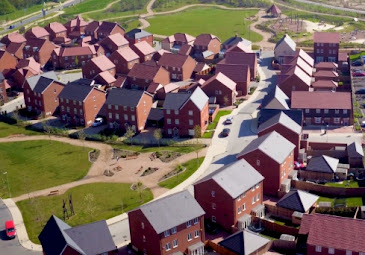 ... but with grass! When fbb rode the FastTrack A and B many years ago ... 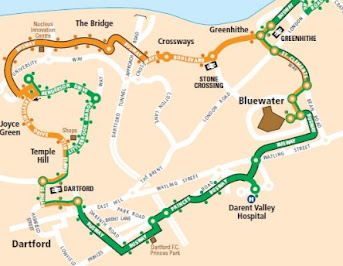 ... the Ebbsfleet area was just a blasted heath of nothingness with a large station, an empty car park and no passengers. But development is proceeding apace. 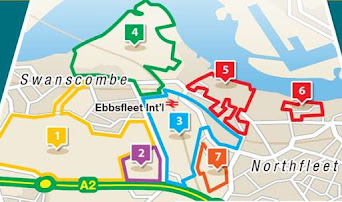 fbb thinks the "Garden Village is in area 1 (YELLOW) abutting the A2.
Roger was impressed with the estate. The service was the usual Arriva Click ... 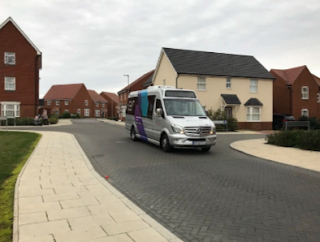 ... financed by the developers. Publicity suggests that it is only "temporary"(for 15 months - yeah right), replacing some irregular proper buses and to be replaced by new FastTrack bus services ultimately with electric buses (yeah right). It "could" but you would have to ask, "Who Pays?" 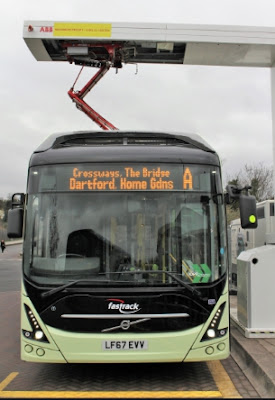 Interestingly the page on the Ebbsfleet local web site announcing an electric bus trial has the headline "Could this be the future for transport in Ebbsfleet Garden village?" 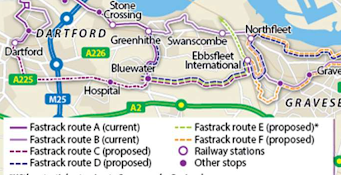 We can probably see that C and D are the key to provide FastTrack the present area of Click, operating between Bluewater and Ebbsfleet International station.
This whole topic needs more research and maybe would be best left until something more positive actually happens.
In the meantime, this is what a blogger wrote recently about Arriva and the existing Fastrack A and B.
Things didn’t start well when the website couldn’t even tell me how much a single fare costs.
The website map showing bus stops crashed when trying to view anything. The whole site looks like it’s been ignored for years. There’s two price levels for one-day tickets covering the same area on different pages. So far, so confusing.
Another part of the website did show a single fare (up to £3.30) but that was on a page with an apparently outdated one-day ticket price. The real time page doesn’t work.
Not the best advert for a zippy zappy new set of services. The Click site is also very well hidden; but we all know that Arriva's web site is execrably awful.
And finally, an explanation of the headline above!
As Roger boarded his FastTrack bus he was impressed with the A4 notice on the cab door NOT. 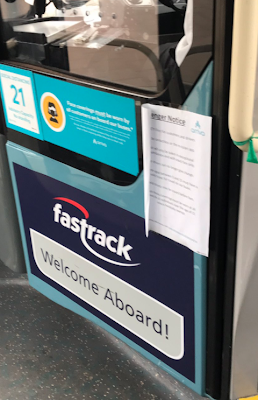 Roger wrote, "Hang on a bit, driver, while I read the Passenger Notice."
fbb adds his usual comment. Why is it headed "Passenger Notice"? Are there other notices on the bus that are NOT for passengers? Are there other notices on the bus for Martians not intending to travel but teleporting in to abduct humans?
The heading should succinctly summarise what is IN the notice. In this case, fbb suggests:-

Ironically many people would read it then!
And Thanks Mr F 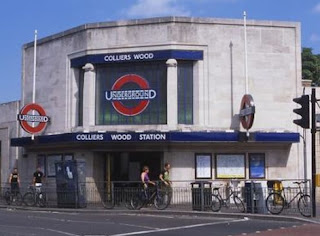 ... has a mega roundel in the window above the entrance but, exceptionally it says ... 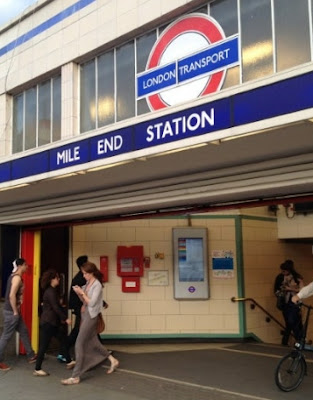 London Transport, and NOT Underground.

Epiphany - celebrating the visit of the Magi, the Wise Men.

A group of Zoroastrian astronomer/astrologers probably recognised the Messiah, the Christ, but probably (again!) did not fully understand. They researched the various ancient documents, some of which are part of the Bible's Old Testament. They made detailed observations of the stars and identified one which meant (to them, at least) that something special was going on in Judaea.

So they went to see, as you would. That was their job! It is as simple and profound as that. 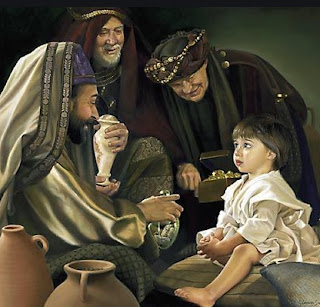 Taking our calculations from Herod's infanticide of babies, plus Gospel writer Matthew's other details of their visit ...
Soon afterward, some men who studied the stars came from the East to Jerusalem and asked, “Where is the baby born to be the king of the Jews? We saw his star when it came up in the east, and we have come to worship him.”

They went into the house, and when they saw the child with his mother Mary, they knelt down and worshiped him.

Herod gave orders to kill all the boys in Bethlehem and its neighborhood who were two years old and younger.

... we can glean the following.

There is no record of how many Magi made the journey

They were looking for a King so Herod removed "the opposition"

They did NOT go to the stable/cattle shed

It took place about 2 years after the Nativity

So Jesus was about two years old and manger-less.

And the most likely rode horses, not camels.

Commercialism and plain ignorance has changed a moving and miraculous narrative into a folksy Kriss-Muss showpiece which seriously destroys the truth of the real   CHRIST  mas  !

And please don't bother trying to work out what "the star" actually was. An omnipotent God (etc.) would have no trouble creating a star for the purpose! That's HIS job!