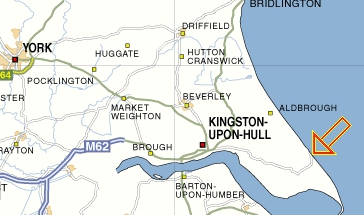 The area east of Kingston, that well known city on the River Hull, is blessed with loads of place names that would not look out of place in "A Games Of Thrones" or "His Dark Materials". Here are just a few to enjoy:-

But one trumps all the rest put together. 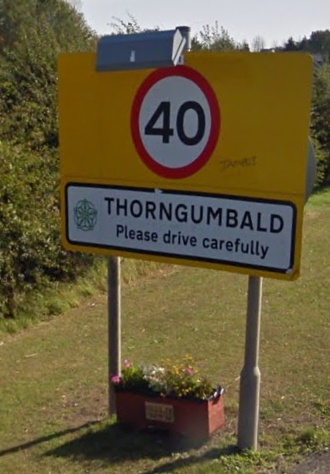 The name was first recorded in the Domesday Book as "Torn", an Old English word meaning 'thorn bush'.A Baron Gumbaud had settled in the area, adding his name to the original and giving the village its present name. By the 17th century the village had endured different spellings, including Thorgumbaud, Thorngumbold, Thorneygumbald and Gumberthorn. The current name has been in use since then. The Gumbaud family still live in the village (possibly?).

Anyway, the current bus service from Withernsea (where the arrow points on the map above) via Thorngumbald to Hull is tun by Go Ahead East Yorkshire and offers services 75, 76 and 77. 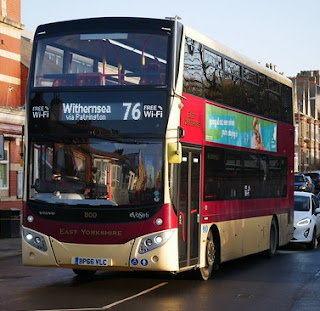 Needless to say, Easy Yorkshire cannot be bothered to produce a network map, so we have to cope with the Google-style with little bus icons jumping about like some irritating and infectious insects.

fbb has managed to interpret these and transfer his thus acquired knowledge to other cartographic sources. 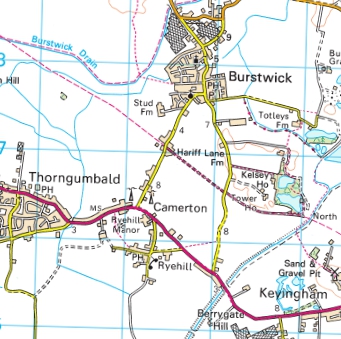 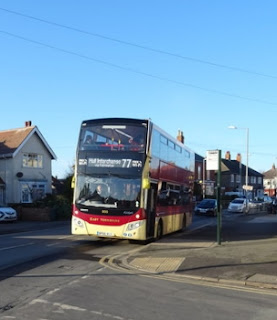 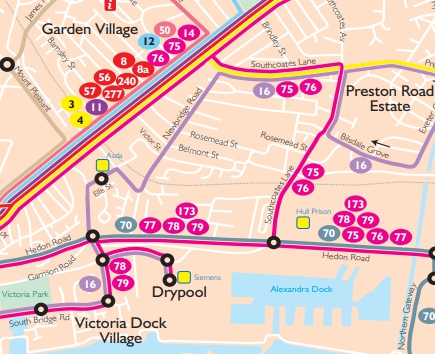 ... where it touches elbows with Stagecoach 16. 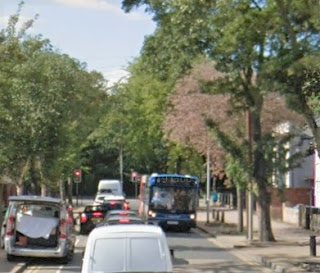 The 77 sticks to the main road into the swish interchange. This gives two buses an hour with a similar running time of approx 90 minutes.. 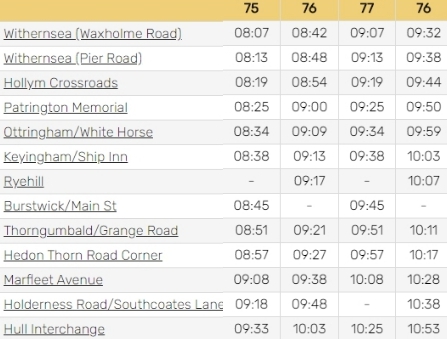 EY doesn't offer a PDF version of any of their timetables so reproduction is less than ideal. In the evenings and early mornings service 75 does both diversions, calling at Burstwick and Southcotes Lane.
From 3rd January, however, it is all change on the main road to Withernsea via Thorngumbald. 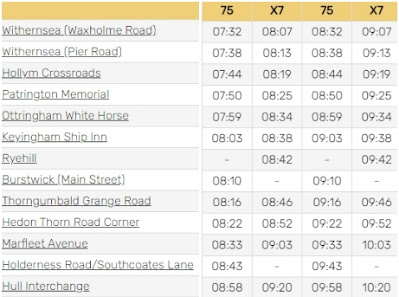 The 75 (via both wiggles) now runs all day (giving those bursting to leave Burstwick a longer journey to/from Hull) and the former 77 is now an X7 via neither of the deviations. For those on the main road throughout, there is a saving of over 10 minutes in running time end to end. 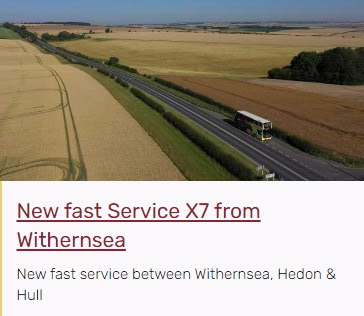 It looks as if X7s become 75s at Withernsea (and vice versa) so we are told that East Rider "luxury " buses will appear on the both routes later in January.
Meanwhile, to the west of Hull ...
... see tomorrow's blog.
The Christmas We Did Not Expect 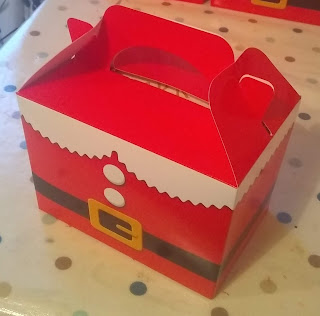 The fbb's Church has been running a sermon series, as titled above. over the past few weeks but yesterday's domestic events reinforced the idea for the old crocks. Enthusiastically, and full of festive fervour, they set out to deliver their afternoon-tea-in-a-box to the 39 pre-warned recipients.
All went spiffingly well for about 300 yards; when this appeared. 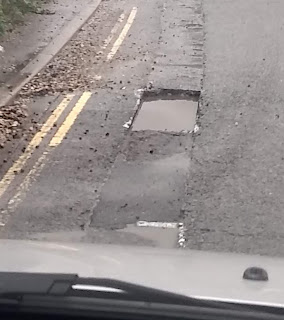 Mrs fbb spotted it and shouted "mind the pothole" approximately 17 nano-seconds before the front nearside wheel made contact; followed, not surprisingly, by the rear nearside wheel. Two burst tyres and 39 deliveries to make.
The RAC reckoned between 2 and 3 hours wait.
Alan (yet another Alan; Seaton Alan aged 82) came, via a mobile phone call, to help.
Then another minor snag arose.
No spare wheel in the little pod provided for the purpose! The fbbs had bought the car second hand and had never checked. Twerps. Apparently cars are often sold new without a spare wheel - you squirt foam in the busted tyre, apparently. No foam either!
But, despite being busy, the little garage in the centre of town ... 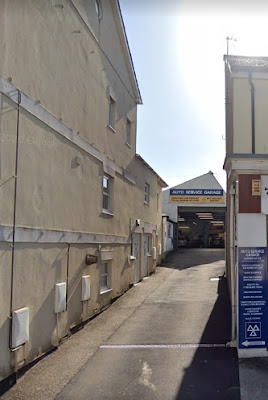 ... sent Graham, a very very nice man, who brought some spare spare wheels he found in a cupboard. So back to the garage spare-wheeled, new tyres fitted and back on the road in less than an hour.

Meanwhile Alan took Mrs fbb to begin the deliveries, completed with a cargo and personnel swap once the fbb's limo was sorted.

One of the great joys of living in a small town, where everyone knows everyone else, is that folk are generally very very kind and very very helpful.

Praise God for helping us ALL sort it. All teas duly delivered! 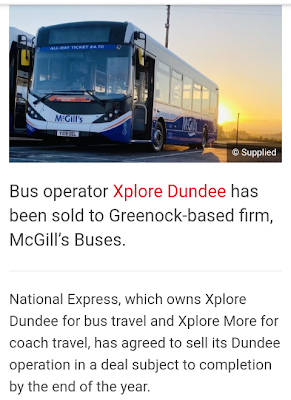 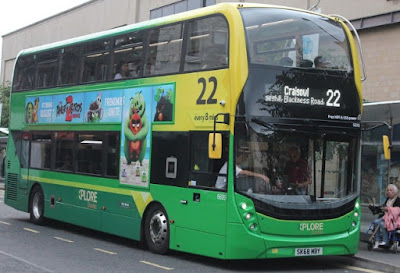 When fbb was nobbut a lad, he went along to Northampton Crusaders Bible Class every Sunday. He was taught by Major Rutherfoord (two letters "o"!) in the Snooker Room at The Liberal Club in Castilian Street.
Slowly the lad began to grasp that Bible was full of stories about real people; not holy superheroes. Moses murdered a bloke and ran away to the desert. Isaiah told God he was unfit to be a prophet. Elijah suffered from mega-stress and did a runner into the wilderness, Peter, the keenest disciple, told people that he never knew Jesus. And so on. 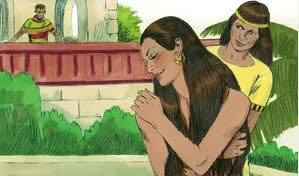 King David, ostensibly a big hero of the Old Testament messed up big time when he was overcome with desire for Bathsheba as she took a bath; so much so that he caused the death of her husband so he could "have her".
We have a likely record of his repentance in Psalm 51. 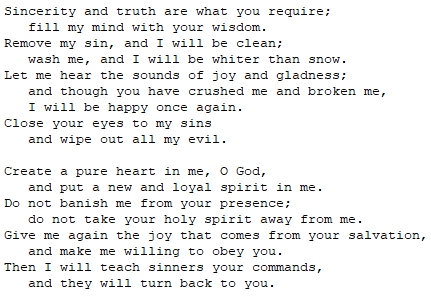 It was a tough thing for a King to admit.
But if God could do that for a failed David, think what he could do for ANYONE.
So your elderly author became a Christian sixty years ago!
And that's what   CHRIST  mas  is for!
Posted by fatbusbloke at 02:00