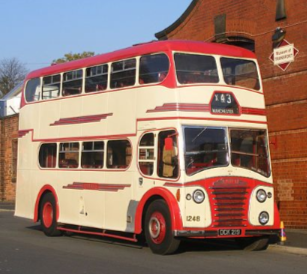 The X43 route has been around since the far off days of fbb's youth. Introduced by Ribble in 1948 (the old man was 3 and, surprisingly did not notice the event.) The service has run from the Colne Valley to Manchester throughout this lengthy period, but with occasional extensions and diversions at both ends. It ended up with Stagecoach Burnley and Pendle. 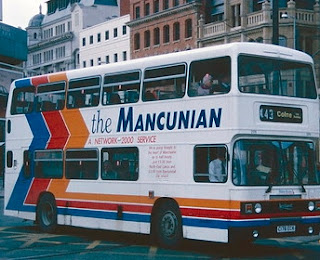 Stagecoach sold out to Fearnley's Blazefield with much rejoicing and uniform burning from former Stagecoach staff!
It was later branded The Witch Way with new buses and chrome sweeps at the back, similar to Blazefield's Harrogate X36. 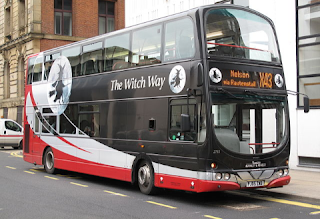 The witch was quite scary with her obligatory hooked nose and chin combination all pictured against a bewitching moon. 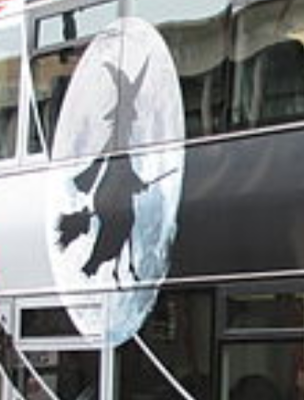 Scaree!
Transdev, buyers of Blazefield, rebranded - as you do - and introduced a sexy witch with shorter skirt and blonde hair ... 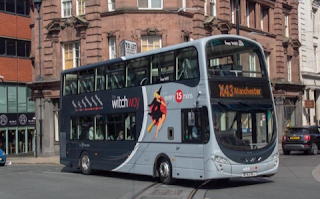 Her "acceptable" image is enhanced by her need to hold her pointy hat on as she speeds across the Pendle Hills. She features on all publicity as you would expect.

The X43 is now every 15 minutes between Burnley and Manchester ... 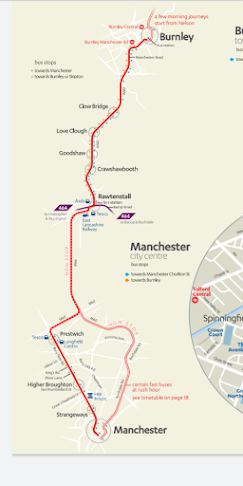 ... with the hourly extension to Skipton being hived of to a new brand ... 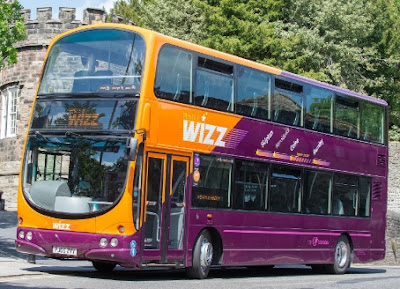 ... but retaining an hourly frequency. 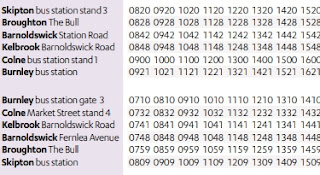 The Wizz buses are now a bit long in the tooth, having carried all possible brands in their lifetime. 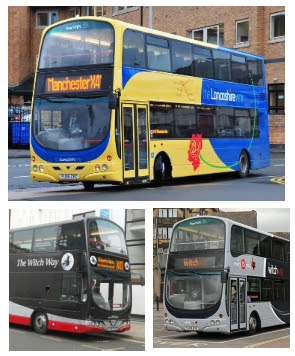 But along comes another year and another X43 rebrand. And now with added video teaser.
It looks as if the Witch has been downgraded to a few lines of nothing much. 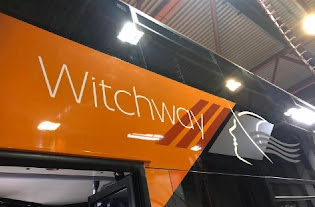 Maybe was shall have to wait until the new vehicles appear in their full glory or for an in-service launch scheduled for 13th inst. One twitterer eaxes lyrical about the bus interior. "It's so luxurious it looks just like a hotel." 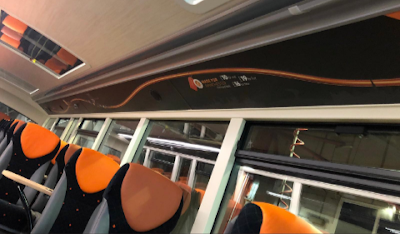 No beds, no bar, no restaurant; strange sort of hotels Mr Twitter stays in!
Three logos in 15 years; the Great Frank Pick of Underground logo fame (1908 to preset), will be spinning so fast in his grave he will look like a whirling circle and bar. 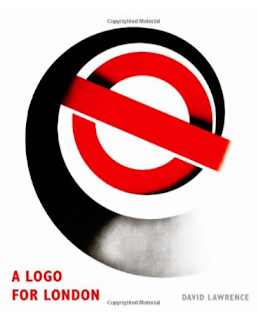 As an aside, fbb's copy of the above book arrived on Friday; expect a full review later in the week. 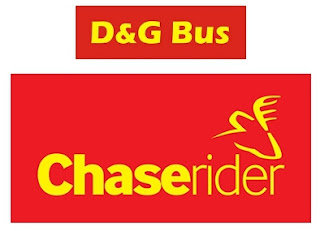 Alert readers, or those with a successful but often rare mixture of old age and good memory, will have spotted a familiar brand name resurrected by D & G for their take-over of Arriva's Cannock depot and services.
Chaserider was one of the area descriptors applied to suggest a little more local identity to the sprawling and vast Midland Red empire. It was applied to a version of National Bus company poppy red livery ...

... and was memorable enough to feature on models for avid collectors. 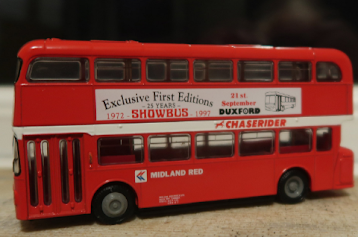 Later, it was developed into a pre-privatisation brand. 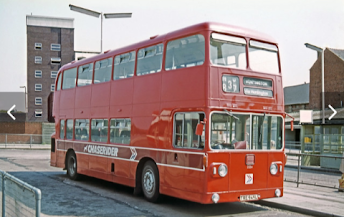 An interloper into the Cannock area was the ex Sheffield bendibus ...

Mention should also be made of the previous competitive onslaught o Arriva from Chase Coaches ... 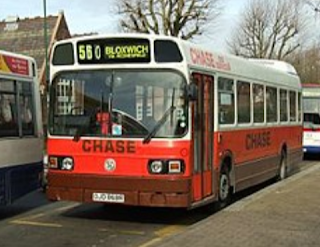 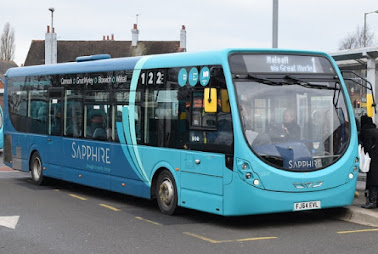 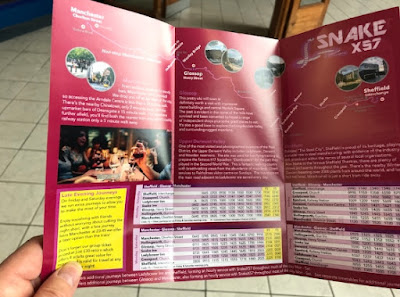 Hulleys courageous but well publicised X57 has made some changes to its timetable since the service started. The Friday and Saturday evening trips between Sheffield and Manchester have been "temporarily suspended" Hmmm?
And, as long ago as the beginning of November, the Sunday service was changed because, surprise, surprise, the running time was too tight.
Did fbb say "well publicised"?
Hulleys web site still shows those evening journeys without comment, and the pre November Sunday service remains to assist passengers in missing their buses. 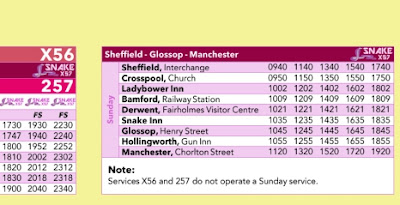 Beyond belief.
On their Facebook page - which all potential passengers turn to when wanting to check on timetables (NOT) - the company has now announced, with very little notice, a revision of the revised Sunday service.
On the positive side, the strange gap in service to Derwent ...

... is now removed but negatively, buses no longer serve Bamford. 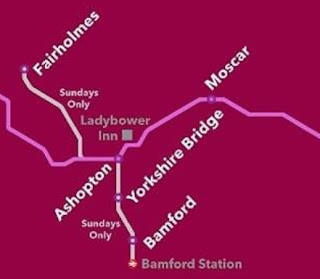 Derbyshire County withdrew T M Travel's tendered 273/4 (from Sheffield via Fairholmes and Bamford to Castleton) on the reasonable premise that Hulleys commercial service provided an alternative of sorts as far as Bamford where connections (again of a sort) could be had with First's 272 to Castleton. Now Hulleys have abandoned Bamford, will Derbyshire open their piggy bank to bring back the 273/4 in some form?
Guess!
So the X57 is back to five clock-face journeys all service Fairholmes but none serving Bamford.
But there's more.
Hulleys have joined the X57 to the X71 from Chesterfield to Bakewell giving an all-year-round Sunday link from Bakewell via Chesterfield and Sheffield to Glossop and Manchester. 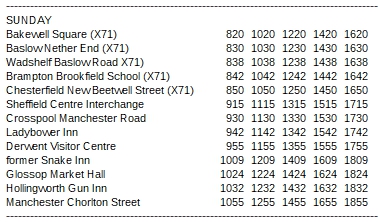 The question to ponder is, "Is this another brave and positive move by Hulleys; or a desperate attempt to generate revenue for a service which never, ever, could be commercially viable in the winter - even without the dreaded virus.?"

The second part of Stagecoach's hard-to-unravel Christmas is postponed.

It is odd that so many folk are happy to denigrate the idea of any religious faith, let alone Christianity. Every single human being exercises faith regularly - faith in doctors, faith in medicines, faith in themselves - and soon we will all be exercising faith in a Covid-19 vaccine. Of course it has been tested and approved; but so had Thalidomide. But we have to trust.
So what's the beef about putting faith in a living, loving deity who desperately wants to help the bestest of his creation?
Trust in the Lord with all your heart. Never rely on what you think you know. 6 Remember the Lord in everything you do, and he will show you the right way. Never let yourself think that you are wiser than you are; simply obey the Lord and refuse to do wrong. If you do, it will be like good medicine, healing your wounds and easing your pains.
These wise words are from the Bible book of Proverbs, a collection of pithy "one-liners" assembled to help folk in the practical outworking of their faith.
We all have the gift of free will, the ability to choose; but changing the world begins with changing ME and that potetial for change begins with a baby in a feeding trough. 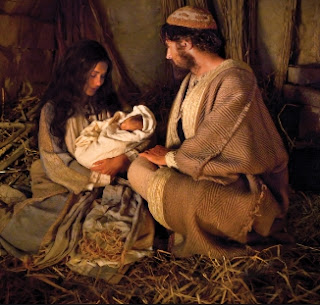