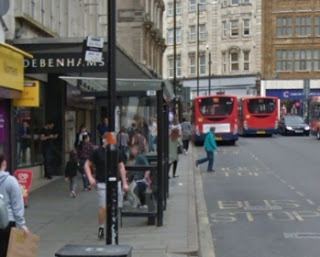 It has been the stop outside the soon-to-evaporate Debenhams that has caused the authorities to worry about social distancing. When the shift-change buses to Amazon and Clipper were due, the "queue" (a k a rugby scrum) was both non-distanced from passers-by and non-distanced within itself. So is any collection of potential passengers in The Drapery, Northampton - there just ain't the room.
Of course, if Northampton had a bus station ...?
Alan catches a 9 or 9A from a stop just above. 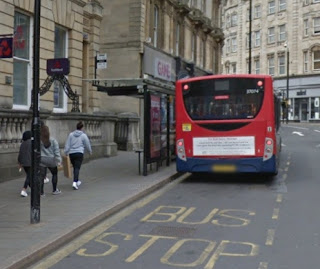 Alan explains how "queues" work.
People hang around outside the bank like racehorses waiting to be put under starter's orders for the every-15-minute service. One of the less frequent routes that serve Duston might turn up and they may need to nip to a neighbouring stop. When the 9/9A arrives, the horses jostle for space in the "queue" under the shelter and board to pay the driver. Social distancing? What social distancing?
But the new stops on Mercers Row are something else! 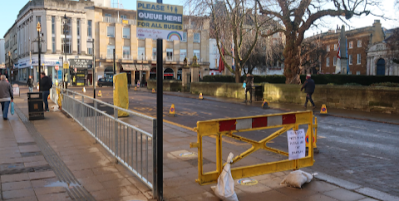 Passengers are expected to corral themselves in the sheep pen between railings and kerb. They are not required to leap over the fences (although that would add a little fun to the humdrum workday of Amazonians and Clipperati) as gaps are provided for entry along the electrified (? maybe not) railings; with a gap by the very small raised kerb for those alighting who may (only may!) be allowed back on to the main pavement. 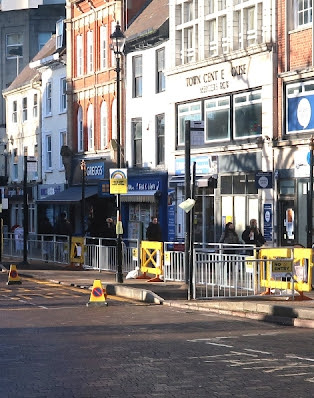 There are, of course, markings on the floor to indicate how to queue. Shelter? None as yet. So passengers will, sensibly, assemble under Greggs blind and as for the 9/9A above.
fbb is not sure what information is provided on the bus stop flags, but, whatever it is, it is too high to be legible by those with less than perfect vision.
The next plan, apparently, is to equip Council staff with electric cattle prods.

This is all part of the policy to encourage people back to the very very safe public transport.
The Devil Witch Is In The Detail 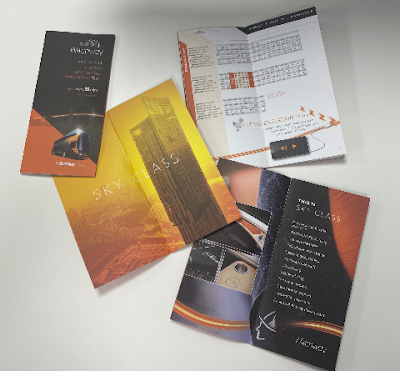 Good publicity needs to be thorough. Good branding needs to be applied to the whole public transport experience. SOME operators are realising this and Transdev's Witchway IS a total package. Above are Twitter-Snaps of the publicity which accompanies the Witch.
"Design" sometimes overtakes legibility. The  white lettering on yellow  says "Sky Class" - clearly.
But even the buses are full of those little branding details that reek of quality. 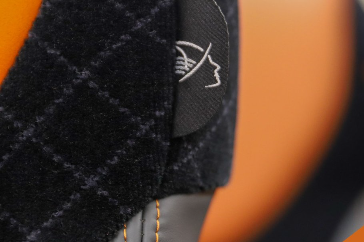 This little detail is on the side of the seat, with the orange headrest feature fore and aft. Will anyone notice? Obviously the indefatigable Ray Stenning thinks they will. Presumably GoAhead North East think little witch pictures will attract a larger number of passengers.
Sometimes, you do wonder. Does "creating desire" create desire to pay the fare? 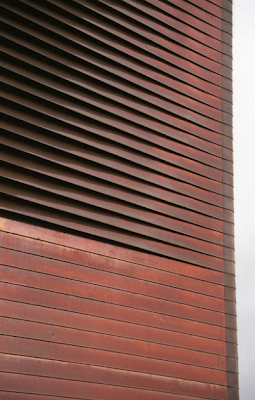 What and where is this part picture of a distinctive piece of transport infrastructure?
Answer tomorrow.
And Where Is This? 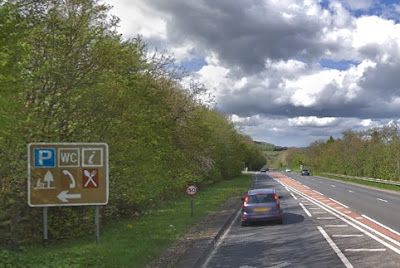 It has a tenuous link with the fbbs trip to the Isle of Wight (by car) to take the old man's sister's funeral. 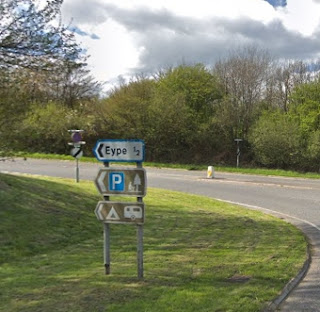 And Where Is This? 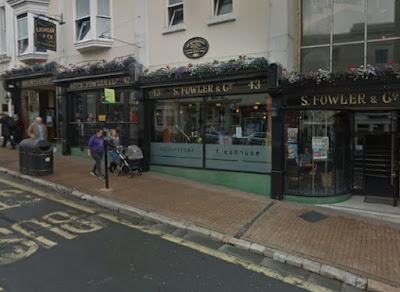 Clues as above. The fbbs were thrown out of here on Thursday last. Answer and explanation tomorrow. The emporium used to look like this in the 1950s. 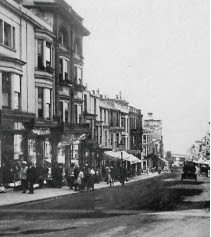 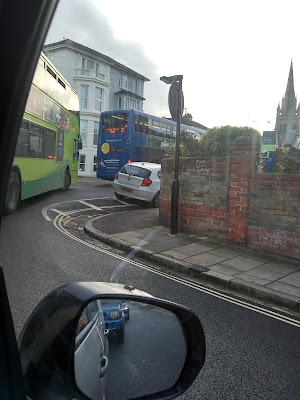 Funerals, family and friends take precedence even over blog writing. Thus it was that fbb had little time to explore recent developments c/o Southern Vectis. What was noticeable was the number of "foreign" buses in service on the Island; mostly from GoAhead's fellow company Solent Blue Line. Vectis Blue (the Islands school fleet) buses were also apparent on all-day services. 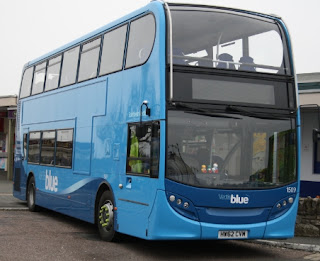 fbb doesn't think that "The Vectis" is short of buses, but the demands of social distancing may mean the company has needed a few more double decks than are available in the home fleet. It all looked disappointingly messy, but, no doubt necessary!

Certainly NOT part of   CHRIST  mas , but undoubtedly part of the dramatic chain of events that followed between 30 and 33 years afterwards. Easter saw the empty tomb, the resurrection of Jesus, but the whole "passion story" narrative then left the early followers afraid and confused.
50 days after Easter (the "pente" of Pentecost") the followers were zapped with a sound like a mighty rushing wind and what looked like tongues of flame above their heads. 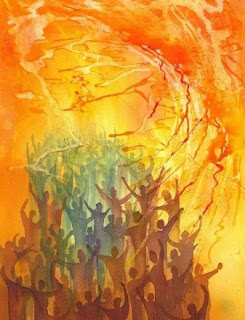 Like any occasion when an infinite God steps into a finite world, the details are impossible to explain in human terms.
But the result was stunning. Frightened, untrained men found themselves able to spread out over the known world, often under intense and life-threatening persecution, teaching people about the "Good News" (Gospel) of Jesus the Christ, their Saviour and generally "Doing Good".
It is that self-same "Spirit" that helped the fbbs do their stuff at sister's funeral. Neither is trained in the ways of vicar-ing; neither has attended theological college but, as No 1 Nephew, watching the departure of his mother on-line from his home in Poland, expressed via WhatsApp ... 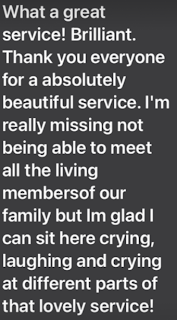 The above is not offered as adulation for the old crocks, far from it - they were "doing a job"; but it shows that God provides his spirit of inspiration (in-breathing) to his people today. It was that inspiration which guided the thoughts of your elderly blogger and his equally elderly Mrs and so made the funeral "real" for all those attending.
The chain starts with   CHRIST  mas  !
Posted by fatbusbloke at 02:00