Goodies For Goole And Gilberdyke? 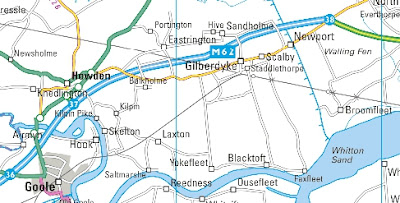 As everyone knows, the A63 runs from Leeds via Selby to Hull; except that it doesn't any more. It becomes the Selby bypass, then at Junction 37 on the M62 (Howden) it evaporates only to re-appear at Junction 38 (Newport) ... ... whence it hastens happily to the River Hull, ending its journey at the City of Kingston. This is the territory of East Yorkhire's 155, 155A and X55. fbb did try some clever stuff to extract a usable timetable page from the EY web site but all that he could muster was this. 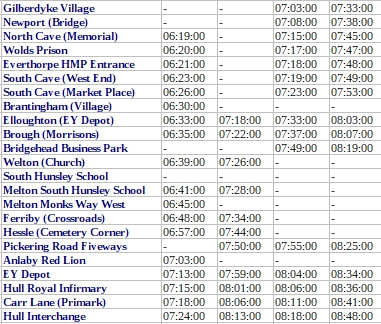 fbb has been informed that, in typical Microslop world-domination mode, the software assumes that when you want a time, you want hours minutes and seconds. fbb is not competent to get rid of them. And, thanks, but search and replace doesn't cut the mustard because once you chop off the seconds, the evil software decides it is not a time after all and produces something in scientific notation.

So fbb has had to chop EY's on line timetable in two. 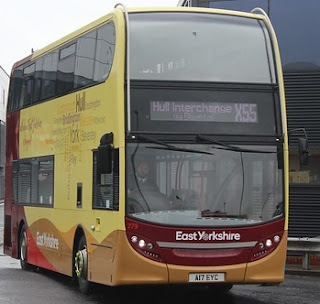 Part one shows a two hourly X55 service from Goole - but only off-peak and evenings. 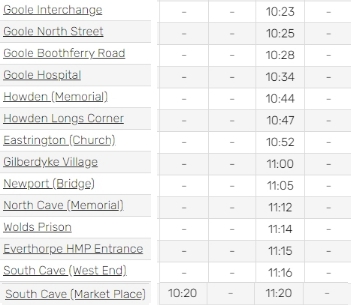 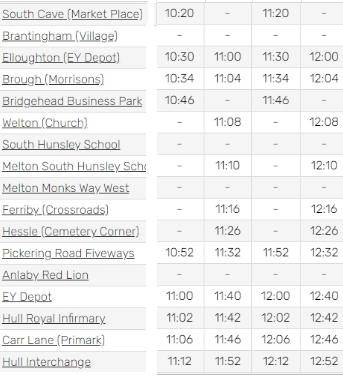 You have an hourly X55 (fast) from South Cave and an hourly 155 stopper via Welton, Melton, Ferriby and Hessle. 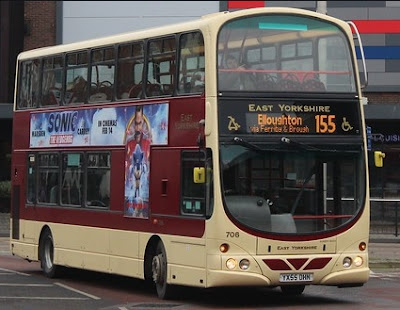 This gives two buses an hour from Elloughton and Brough, ditto for stops nearer to the city. The map (click on it to enlarge) makes it crystal clear ... 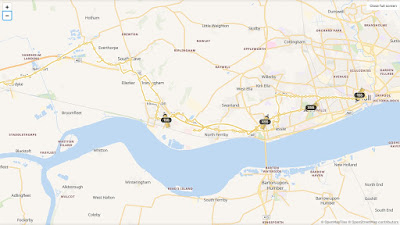 ... NOT!!
But from 3rd January it is all change on the A63 and associated thoroughfares.
EY are introducing new EastRider Service X5, starting Monday 4 January 2021. 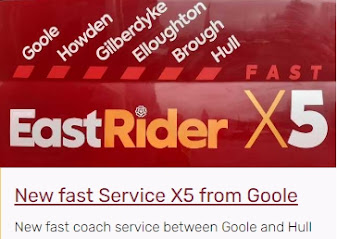 The brand new fast coach service will run between Goole, Howden, Gilberdyke, Newport, Elloughton, Brough, Hull Royal Infirmary and Hull.
Limited stop, so you get to your destination quicker.
Coach travel, air conditioning and leather seats
WiFi and plug sockets
Wheelchair lift for easy access.
Bring your bike along for free!
The new fast Service X5 will run alongside new Service 55, which will continue to serve villages such as North Cave, South Cave, Welton & Melton, and will also now provide a link to Melton Business Park and Bridgehead Business Park.
Sounds great does it not; especially for people from Goole. Let's look at the X5 timetable. 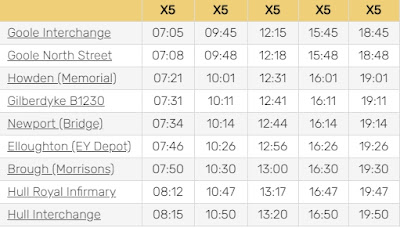 There are currently SEVEN journeys to and from Goole, with the first trip to Hull at a not very attractive 1028. It would appear that the wonderful X5 represents a cut in service. But, hold ye fast, there are two 55s from Goole at 1355 and 1605, but nothing after the 1845 X5. In terms of journeys to and from Goole, the number of trips is maintained by the scope is very different.
So what of the new 55, the stopping service? 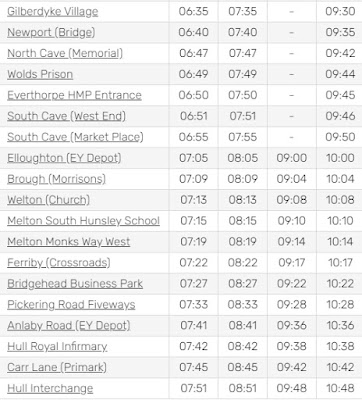 It leaves Elloughton and Brough with a bus every hour plus the occasional X5 instead of every 30 minutes. Likewise destinations nearer to Hull have had their service halved as the X5 doesn't stop there.
The attractive X5 does, in fact, hide a significant reduction of service along this corridor, with the compensation of a better frequency between South Cave and Gilberdyke.
Long term readers may well remember the previous attempt to up-grade this route ... 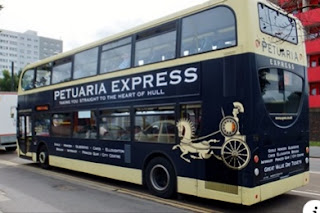 ... with a special livery and named after a Roman fort. Will the new X5 do any better?
Just A Thought From The Twitterati 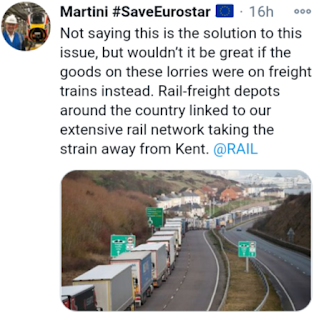 And a consequent reduction in harmful emissions from those nasty diesel engines which until recently, were far better than those nasty petrol engines. If the UK government were really keen and really green, shouldn't policies be developed to "subsidise" rail through the chunnel to achieve environmental benefits.
Greta would be grateful.

We use the letter X in so many different ways; readers could well extract a few more from the depths of their "leedle grey cells'. The two lines of doggerel above suggest three ways that are very much the core of the truth of    CHRIST  mas  .

Right from the beginning of time, mankind has been "created" with the ability to choose. That choice between good and evil, positive and negative, destructive and constructive is what makes us human. It was a risky gift from the Creator because History suggests we are better at making the wrong choice rather than the right choice - but we cease to be human without freewill.

Blog readers will immediately know the the right hand bit of the above equation should equal 0 not 10. For those who have forgotten their advanced mathematics, it is known as Euler's identity. (He is pronounced "Oiler".)
we are reminded at  CHRIST  mas  that God has done all that is necessary to rid the world of evil (big evil or little evil). Embarrassingly it all begins with ME - with the individual.

But we cannot avoid one X at  CHRIST  mas ; it was the X that the Wise Men saw in their researches, it was the X of the gift of Myrrh.

Sermon over! But it is worth thinking it through for  CHRIST  mas ; it offers much more lasting value than Kriss-Muss.
Only two letters to go - and shorter comments - promise!
Posted by fatbusbloke at 02:00