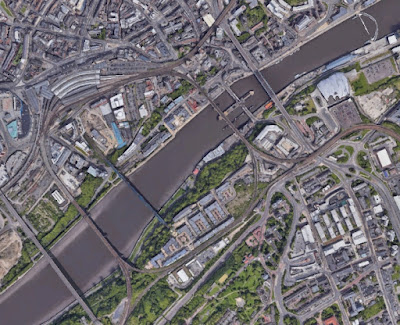 Possibly the easiest way to understand the development of Newcastle Upon Tyne is to follow the building of bridges across the river. Here is a composite of the present structures following the river from South West to North East (bottom to top, below) 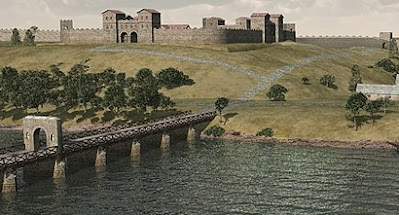 ... which gave access to  new camp (Novo Castra i.e. New Castle) on the north bank of the river - all part of the Romans' desire to keep the primitive and violent tribes of Britannia thoroughly well subjugated.
The map of 1412 shows a growing community and a bridge ... 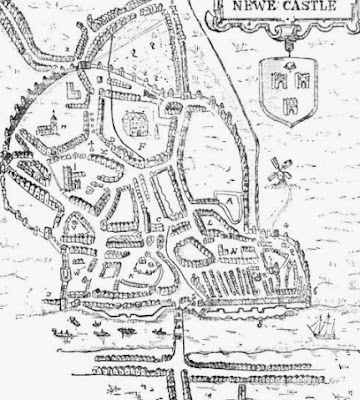 ... one of many that either burnt down or collapsed. This engraving shows one such example. 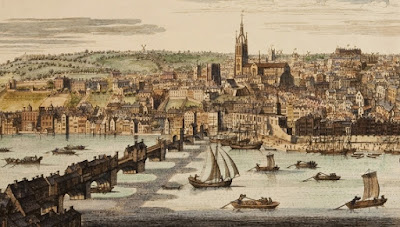 In 1779 a reasonably solid stone bridge was built, seen below at a much later date. 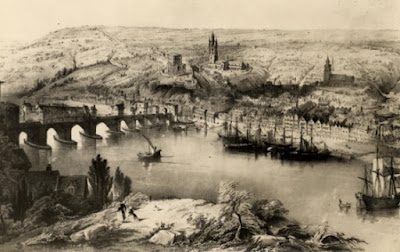 Note the three tall buildings all of which remain today in some form or other. From left to right, they are the Castle (keep built 1177), on the site of the old Roman fort. 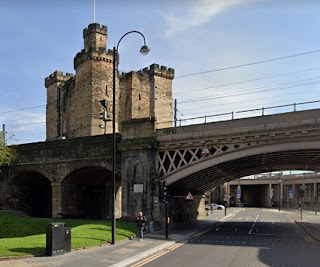 The castle has been a favourite location for photographing the once complex railway junctions at the exit from Newcastle Central Station (below out of shot, left) ...

... and, back in the days before track rationalisation, the junctions were indeed complex. 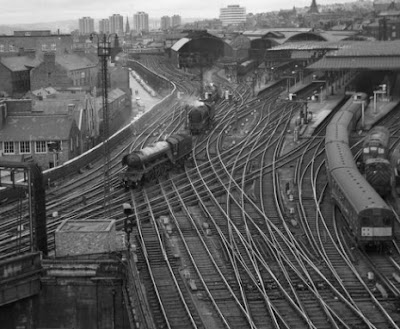 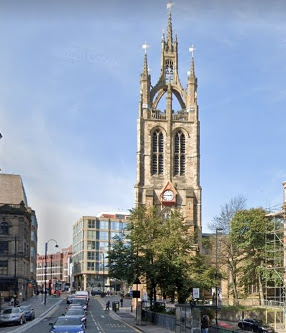 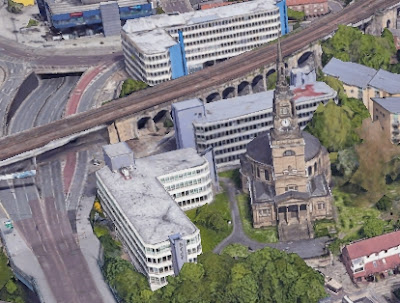 It sits towards to top of a steep hill leading down to the river. 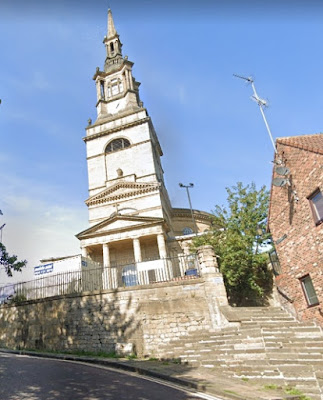 The stone bridge remains for nearly 70 years, then the railway arrived in 1849, and how. (castle ad cathedral far right) 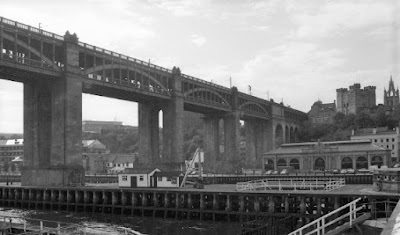 The top deck is for trains, with road traffic below to a Stephenson design. The lower deck had been closed for some time and re-opened for buses running southbound only. It has splendid entrances ... 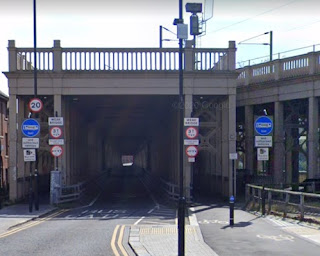 ... and if you have a bit more time, the footpaths offer splendid views of the river. 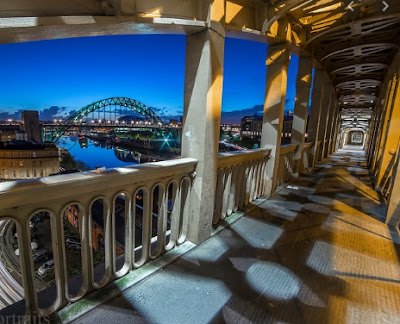 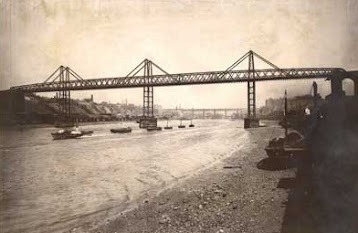 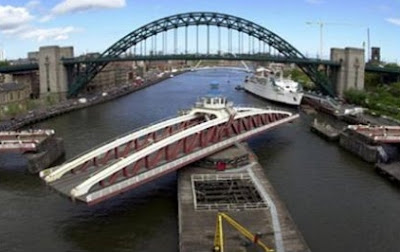 The previous bridge on the site was demolished in 1868 to enable larger ships to move upstream to William Armstrong's works at Elswick.

The hydraulic Swing Bridge was designed and paid for by Armstrong, with work beginning in 1873. It was first used for road traffic on 15 June 1876 and opened for river traffic on 17 July 1876. At the time of construction it was the largest swing bridge ever built.
In 1901, the rather spindly Redheugh Bridge Mark 1 was replaced with something a bit stronger. 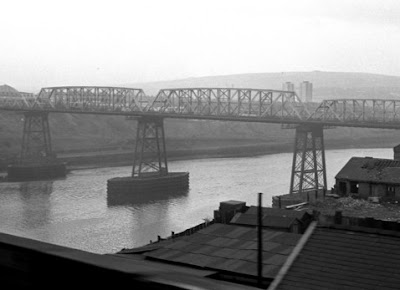 After another 5 years, the North Eastern Railway decided to improve congested access to Newcastle Central Station by building a second railway bridge. King Edward VII opened his eponymous bridge Bridge in 1906 with much public celebration. 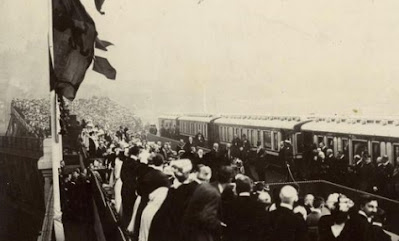 This time it was rail only!

Arguably the Tyne's most spectacular crossing happened in 1928 when the Tyne Bridge opened. 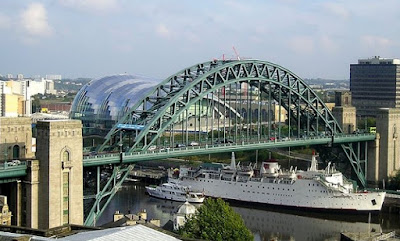 Of all the river crossings, this monster could be said to be the epitome of Newcastle.
Work started in August 1925 with Dorman Long acting as the building contractors. The Bridge was designed by Mott, Hay and Anderson, comparable to their Sydney Harbour Bridge version. Both these bridges derived their design from the Hell Gate Bridge in New York City. 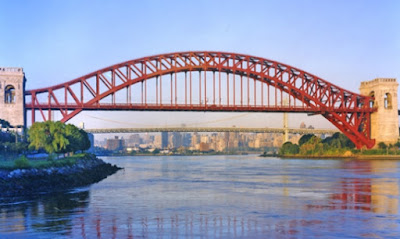 The Dorman Long team was also notable for including Dorothy Buchanan, the first female member of the Institution of Civil Engineers, joining in 1927.
We can dash under, or cross over, the three modern constructions quite quickly as many readers will remember their installation.
The Tyne and Wear Metro bridged the water in 1981 in the form of the Queen Elizabeth II Bridge linking Metro lines south and north of the Tyne. It can come as a surprise to riders of the lovely little trains as it is approached by tunnels on both sides. 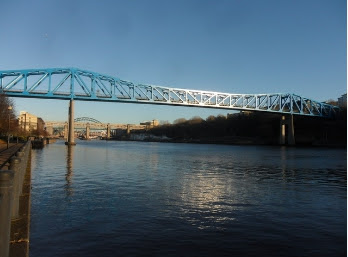 Next comes Redheugh Bridge Mark III in 1983, somewhat bigger than either of its predecessors. 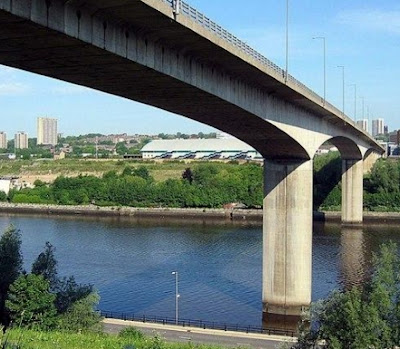 And finally, as recently as 2001 came a humble pedestrian bridge, humble in concept, but far from humble in design. The Winkin' Blinkin' Bridge is more respectfully known as the Gateshead Millennium Bridge.The video is a timelapse; it doesn't wink and/or blink as fast as that!
But the Millennium Bridge was built specifically to link the redeveloped Quaysides of Newcastle and Gateshead; which, at last, brings us back to buses!

Words can be a real pain in the Bible. Immanuel comes from the Hebrew עִמָּנוּאֵל meaning "God With Us". But it is not a translation of the Hebrew, it is a transliteration. That means that the letters of the Hebrew word are changed into appropriate "western" letters. Emmanuel comes from the Greek Ἐμμανουὴλ which is transliterated from Hebrew to Greek and trans-transliteration from Greek into "western" letters. Confused.com? So we have two versions of the same word.
Then there is "Virgin". Matthew's Gospel uses it after Mary was told of her astounding task by an angel 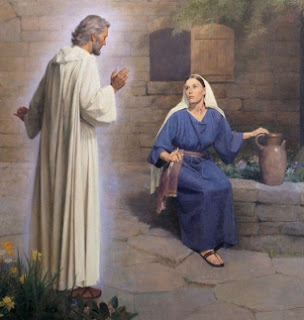 Angels are always portrayed as male in the Bible and, remember, angels on earth do not have wings.
Now all this happened in order to make come true what the Lord had said through the prophet, “A virgin will become pregnant and have a son, and he will be called Emmanuel” (which means, “God is with us”).
But Matthew is quoting in Greek from the prophet Isaiah who wrote in Hebrew; and modern translators have used "young woman" (i.e. ready for marriage) which is the pedantic meaning of the Hebrew word.
Isaiah replied, “Listen, now, descendants of King David. It's bad enough for you to wear out the patience of people - do you have to wear out God's patience too? Well then, the Lord himself will give you a sign: a young woman who is pregnant will have a son and will name him ‘Immanuel."
"Aha," cry the Christian bashers, "so she wasn't a virgin after all!"
In the culture of the Old Testament, as in the culture of the new, a young woman "ready for marriage" would have to be a virgin or no man would marry her. The Greeks had the right word for it.
That was Joseph's beef until he, too, had a vision which told him not to dump his unmarried pregnant wife-to-be. 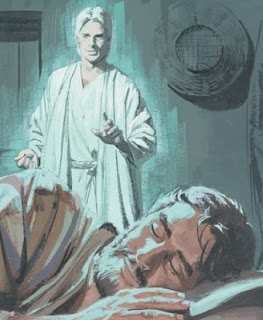 An angel of the Lord appeared to him in a dream and said, “Joseph, descendant of David, do not be afraid to take Mary to be your wife. For it is by the Holy Spirit that she has conceived."
"But a virgin having a baby is impossible." cry the knockers.
Exactly. You have got it. Right in one. Of course it is impossible in human terms - but not at all impossible for God. God is very good at the impossible; that's His job.
It is the impossible that makes Kriss-Muss into   CHRIST  mas  !
Panic not; J is MUCH easier!!
Posted by fatbusbloke at 02:00