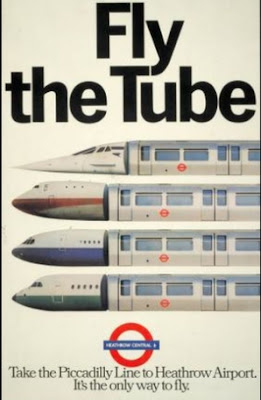 Most readers of this blog, even if they are only an occasional visitor to the Capital, will be familiar with posters carrying the London transport roundel. Mostly, these days, such posters are about the railway and its operation ... 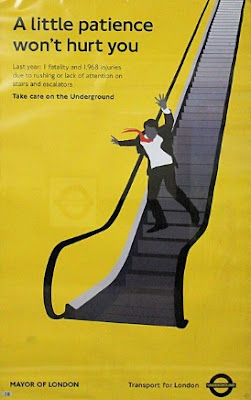 ... whereas in earlier times, posters were encouraging folk to USE the Underground to go to places; to make trips out for their own enjoyment and entertainment. The Logo For London book takes us back further and introduces its readers to a time BEFORE the bullseye became ubiquitous. Inspired by the book, fbb has looked a little deeper.
The Metropolitan Railway's suburban development business begart a huge range of posters ... 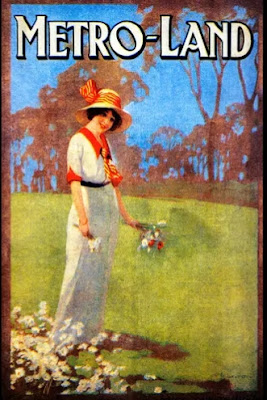 ... but without any signs of the Company's "diamond" logo. 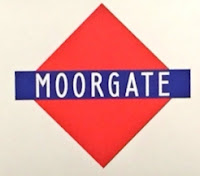 Metroland WAS the brand! Only occasionally did the diamond appear ... 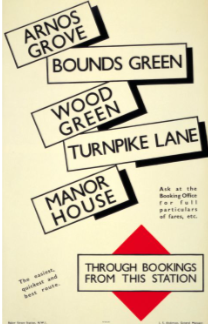 In some PR schemes just the word "Metro" was deemed to be enough to exude the quality and efficiency of the company's railway. 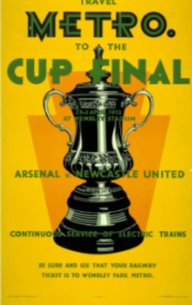 Before the creation of London Transport in 1933, the separate companies and systems provided their own publicity. Here is The London General Omnibus Company, know pretty universally as "The General". 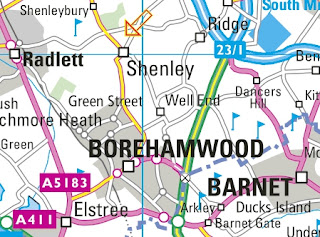 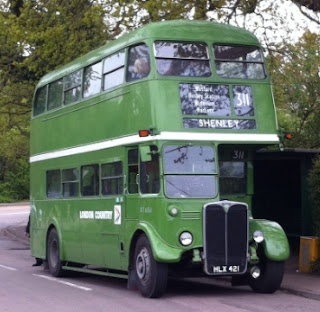 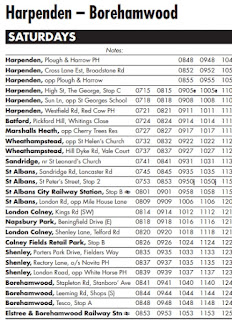 And Shenley does have an intriguing "Lock-up" as featured on The General's poster. 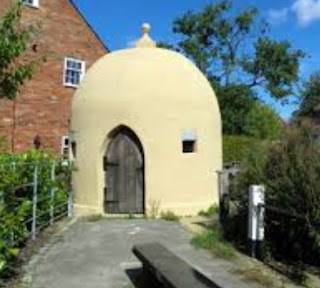 This lockup was built in the 1700s. A date stone tells us it was repaired in 1810. It also has the inscription 'DO WELL. AND FEAR NOT.'/'BE SOBER. BE VIGILANT'. Before a national system of policing was set up many villages had their own lockup. Criminals (often drunks, petty thieves and those starting fights) were held for a short time. They were then either released or sent to a larger town for trial. Generally the lockup was used by the parish constable who had the unpaid job of keeping law and order in his own parish.
The Picture on the poster was painted by Frederick Charles Herrick in 1931.
When did any of our readers last see a poster, or any notice, inviting passengers to travel to Shenley to see what is more correctly known as "The Cage"?
Mysterious Ramifications At Mercers Row

Alan reports further (to yesterday's blog) that work on the new stops has stopped. They are currently pole-less, flag-less and barrier-less. All that exists is some yellow sign writing on the road and some dinky raised pavement bits which bus drivers will find difficult to "hit" (metaphorically NOT literally). 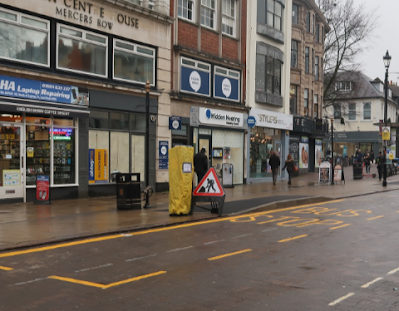 Alan thinks it is unlikely that buses have ever used the stops, despite the Stagecoach twit, and will not do so until they are "finished".
Call For A Taxi 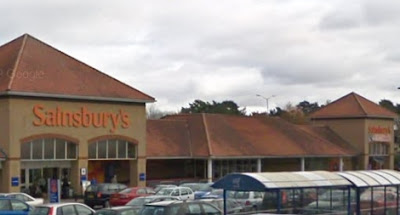 On their journey from Seaton to the Isle of Wight, the fbbs are wont to breakk their journey at Sainsburys, Tricketts Cross (Ferndown, near Bournemouth). Normally this is an essential PNB plus a snack or a meal to sustain them on their way. The caff is currently closed due to today's unprecedented circumstances and is in use as a junk store.
Fortunately, the ever resourceful Mrs fbb had brought a flask of coffee and the necessities were, equally fortunately, open.
fbb was pleased to see that Sainsburys have provided a phone for the elderly to call a taxi to taken them and their groceries home. 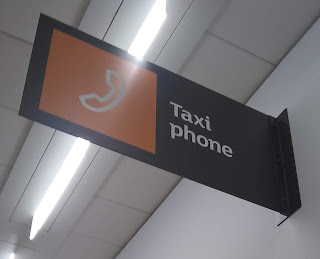 fbb wonders whether the elderly of Frendown will be familiar with this stunning new technology.

People often say, "I wish I had your Faith." Hey, having Faith is not difficult. They go on to say, "But I have so many questions ..."
fbb's very short "sermon" at his sister's funeral ... 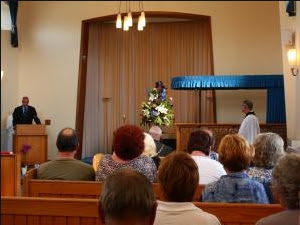 ... will be based on sentences from Paul's letter to the Romans, Chapter 8. It answers some questions and will always provoke more; but the answers are both simple and profound.
But if we hope for what we do not see, we wait for it with patience.
In the Bible, the word "hope" implies certainty, not a woolly possibility.
EXPECTATION  - A Christian expects to go to "heaven".
The Spirit himself pleads with God for us in groans that words cannot express.
In the language of the courtroom we stand guilty before God of failing to do things His way.
EXONERATION - The punishment for our failings is paid for by Jesus death.
We know that in all things God works for good with those who love him, those whom he has called according to his purpose.
The message of the  CHRIST  mas  Angelic Host repeated.
EXULTATION - the ultimate eternal good for those who stick close to God.
It's what  CHRIST  mas  is all about.
Posted by fatbusbloke at 02:00